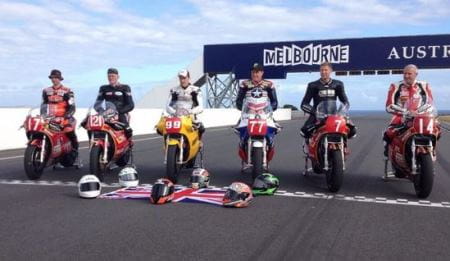 Team Australia reigned victorious in this weekend’s Phillip Island Classic, retaining the International Challenge title after totalling 75 more points than closest rivals Team United Kingdom. Victory for the Aussies didn’t come easy though, as the Brit boys put in a valiant effort, with Northern Irishman Jeremy McWilliams storming to a double victory on the Saturday.

McWilliams took the first race win by over a second on his 1982 Harris F1, from Aussies Cameron Donald and Shawn Giles. The next Brit would be found in fifth place, Gary Johnson followed by TT hero John McGuinness in seventh. Mike Edwards finished eighth for the Brits with Ryan Farquhar rounding out the top ten in an impressive points haul for the Europeans.

It looked as though the Brits could be in with a chance as McWilliams took the double, with the rest of Team UK finishing in fifth (Johnson), eighth (McGuinness), ninth (Edwards) and twelfth (Farquhar). However, with Donald finishing much closer to the former Grand Prix racer, the boys knew they’d have a tough task to beat the Aussies come Sunday.

A tough attack on Sunday was to be expected from both teams in contention but it was the Aussies who came out on top in the third race, locking out the podium. Cameron Donald took victory on his Suzuki XR69 from Shawn Giles and Brendan Roberts. The first Brit would be McWilliams in fourth place followed immediately by Gary Johnson in fifth.

Close to retaining their title, the Aussies came out for the final race in form and despite main-man Cameron Donald failing to finish, an Aussie 1-2 in the shape of Giles and Roberts sealed the deal. McWilliams finished third with Edwards sixth and McGuinness seventh. Lincolnshire’s Gary Johnson failed to finish.

McWilliams heroic efforts saw him tie the overall ranking with Australia’s Shawn Giles, but the team scores, taken from the top five of each nation, saw the UK squad miss out.