At the age of 22, Alex Lowes is already opening doors to what looks a promising motorcycle racing career. For the 2013 season, Lowes is running in the 2013 MCE British Superbike Championship (BSB) under the wing of Louth-based Samsung Honda. Consisting of time-served men and women, the combined group of people at Samsung Honda has more race championship experience, wins and titles than you can wave an oily dipstick at. 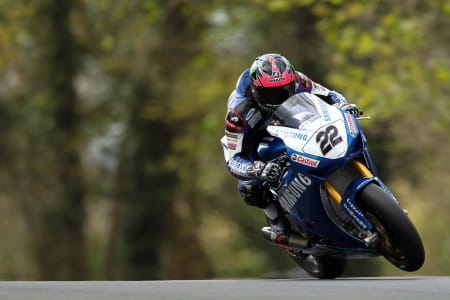 At present, after three rounds, Alex Lowes currently tops the BSB riders’ standings – no mean feat in itself given the level of competition in the championship. But there’s another reason why Alex Lowes celebrated after taking a win and third placing at the latest round of BSB, held at Oulton Park. On the way to taking pole position in practice, Alex posted a lap time of 1m 34.884s, significantly quicker than the official BSB race lap record of 1m 35.436 set by Honda man and current team-mate Ryuichi Kiyonari in 2006.

Because Alex set the fastest time in qualifying and not while racing, his lap time doesn’t count as a new outright lap record. All the same, Alex’s achievement is still impressive given that the latest BSB rules and regulations are more restrictive than that of six or seven years ago. Part of these rules includes restricted levels of engine tuning and all teams running with the same specification ECM (Engine Control Management), which doesn’t include start launch, traction and anti-wheelie controls. The reasons for this ‘controlled’ application are to ensure affordability and an equal footing for all riders.

So how comes Alex Lowes’ lap time razored the existing lap record set on a bike that didn’t have restrictions applied?

“There are two good reasons,” says Havier Beltran, team manager for Samsung Honda. “One is continual development of the bike and the other is the human factor. A lot of people believe the latest rules are a restriction. In a sense they are, but you are never going to suppress the performance of a standard superbike and the controlling rules aren’t there to reduce performance. Put it this way, today’s bikes are making 170-185bhp in standard form – the sort of power that, lets say, ten years ago teams were hoping to get with engine tuning.

“Now add to the equation engine tuning that is allowed by the rules and you have an impressive engine that will, as we saw at Oulton Park, break existing lap times from several years ago. This is, of course, assuming the bike’s chassis and running gear is on the same development curve, which it is with our bikes. But it isn’t all about mechanical advancement. Tyre development is also continual. This year’s control tyres have greatly improved over last year’s. The Pirelli tyres now have a wider window in which they work – not stickier, but they now work to give a constant spread of grip throughout the race and cover wider track temperatures.

“The human element is the rider. Alex is a young lad but he’s quick and on top of his game. He’s also noticeably matured and now uses his head as well as his heart. To win the first race at Oulton showed his talent. Taking third place in race two in the way he did showed he thought about his position and the rest of the year. Another plus for Alex is he is like a sponge; he’s learning about the bike and tyres, taking onboard information from the team and using it all to his advantage. And for these reasons it’s quite possible we will see a new official lap time before season end.”