Motorcycle Racers: From another species 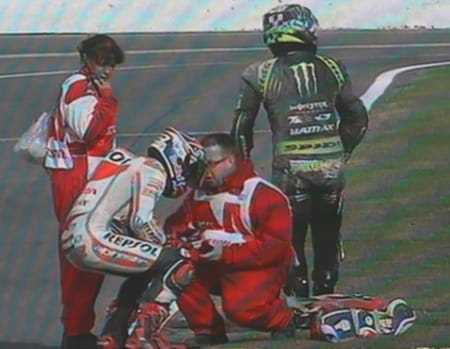 After a dramatic fall in morning warm-up, in which he dislocated his shoulder, Marc Marquez later went on to come damn close to taking victory in the British Grand Prix this weekend. In fact, racing while injured is becoming the ‘thing’ this year in MotoGP, after both Jorge Lorenzo a and Dani Pedrosa have defied pain to ride after injuries that would see the average Joe signed off work for weeks.

Lorenzo fell dramatically in a wet second session at Assen, breaking his collarbone. He flew to Barcelona overnight for surgery and rocked up back at the circuit the next day with his intentions set on racing. He finished fifth, less than forty-eight hours after breaking his collarbone. Quite a heroic feat, no?  Pedrosa broke his collarbone in Germany, he returned a week later in Laguna and finished fifth, only to later realise the injury was worse than first thought.

Motorcycle riders seem to be an entire different species, as when you look through history this kind of thing crops up time and time again. Valentino Rossi in 2010, returning six weeks after breaking his leg and coming within inches of a podium finish. What about Colin Edwards? Not exactly a spring chicken in comparison to other GP riders, Edwards took third place in the British Grand Prix after breaking his collarbone just over a week prior. A year later at Silverstone, remaining with the Tech 3 team, Cal Crutchlow rode to a heroic sixth place from the back of the grid after breaking his ankle the day before. Let’s not forget the time Jorge Lorenzo had to be carried on to the podium at Le Mans a just a few weeks after breaking both of his ankles in a crash at Shanghai, followed by a tumble in practice at the French circuit ahead of his stunning race day performance.

In World Superbikes, Leon Haslam returned to track just over a month after breaking his leg at Donington, while it wasn’t a successful return with Haslam pulling out after two sessions – you’ve still got to acknowledge the sheer balls it has to take to even get back on a bike after such a horrific injury. After never breaking a bone in his body, Noriyuki Haga shattered his collarbone into four pieces in a qualifying session at Miller Motorsports Park in 2008. He went on to qualify tenth and after crashing in race one, he took sixth in race two! In the modern day, there are hi-tec treatments for athletes such as spending time in a hyperbaric chamber and these can speed up recovery. But riders racing injured isn't just a thing of new...

Back in 1995, Carl Fogarty broke numerous bones in his ankle and hand in a crash at the first race in Sugo, yet went on to win the second by over five seconds.

In 500 Grand Prix, there’s one heroic ride that stands out like a sore thumb, or a sore leg in the case of Mick Doohan. Amputation had initially been on the cards for the Australian after breaking his leg in Assen and subsequent poor treatment, however seven weeks later the would be five-time champion returned to racing in Brazil to defend his diminishing title lead. Worn down, unable to walk and having lost a lot of weight, Doohan fought his way to a twelfth placed finish in a simply heroic effort. Unfortunately, Doohan missed out on the title that year by just four points, although that didn’t stop him winning five more in the following years.