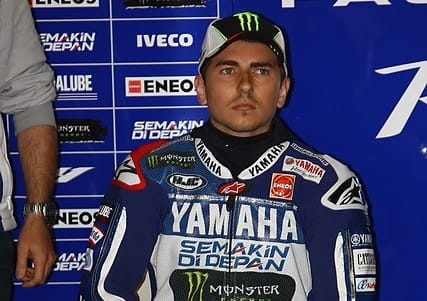 To the man in the street, they are either totally crazy or incredibly brave.

It could be a mixture of the two but it takes a lot to keep a rider away from his bike as both Leon Haslam and Jorge Lorenzo have shown in recent times.  Both have crashed heavily and at high speed in the wet at Assen, but both have bounced back - following surgery - to race when anyone else would still be undergoing a lengthy period of recovery.

Take Haslam for starters: He badly broke his left leg, an injury compounded by the bike tangling with him.  He was flown back from the circuit to his local hospital in Nottingham where the break was pinned. He worked on fitness, tried anything and everything to speed his recovery and though able only to hobble around on crutches, four weeks on he persuaded medics that he was fit to qualifying in his home round at Donington Park.

The problem was not the bone, rather the surrounding tendons and the movement in the knee and the stress elsewhere in the body as he compensated by making other body movements on the bike. His team saw the struggles he was having, particularly on the fast downhill Craner Curves sections and withdrew him from the races.   Haslam started the Portuguese round, but exacerbated the problem by banging his knee on a kerb, forcing withdrawal but he was back and in the points at Imola.

Then there was Lorenzo.  He broke his left collarbone in free practice, flew from the circuit to Barcelona for an operation at 02.00, returned to the circuit with the three breaks plated and screwed was declared fit to take part in race day warm-up. The rest, as they say is history. He raced, starting from the fourth row and finished in fifth place.  A quite remarkable feat by any standard to have done all of that in the space of 48 hours.

What is the driving force that pushes them on to what are pain racked rides, amid of hours of strength building work on the muscles and sinews around the pinned and plated broken bones? It would be easy to say money but they are contracted riders, their jobs are secure. Rather it is the basic make-up of the metabolism of a racer. They have to be back on track and fast.  They cannot bear the thought of anyone else taking over, however briefly aboard their bike.

And there is the small matter of points, damage limitation, which in the case of Lorenzo made his agonising  ride at Assen worthwhile – those who saw him and his bike being wheeled into the team’s pit-garage might disagree having seen his ashen face and body sapped of strength. Lorenzo would counter that by saying he dropped only two points on Dani Pedrosa, who stands between him and retaining the World MotoGP crown.

No, far from being crazy, these racers are brave guys!