It’s race week at the Isle of Man TT and still, thousands of visitors are flooding to the island in time for the race’s blue ribband event: the Senior race.

At least 65,000 visitors will flock to the island over the race period, some travelling far more than others to reach the ‘Jewel of the Irish Sea.’

Bjorn Sebulke travels from Frankfurt to the Isle of Man every year on his motorcycle but the umpteen hours in the saddle is only a small part of Sebulke’s dedication to the famous road race.

The German TT fan saves about 20 per cent of his entire year’s wages to come to the TT and marshal at Governor’s Bridge.

“I save up every year to come here and marshal. I don’t earn a lot of money - about €2000 a month but it’s worth saving up what’s left for this.”

“I love bringing my bike but there was one year I couldn’t bring it. I wanted to do a lap so a fellow marshal arranged for me to borrow a bike so I could cycle the course. I told him ‘I must do the TT course on two wheels - it can’t be in a car.” 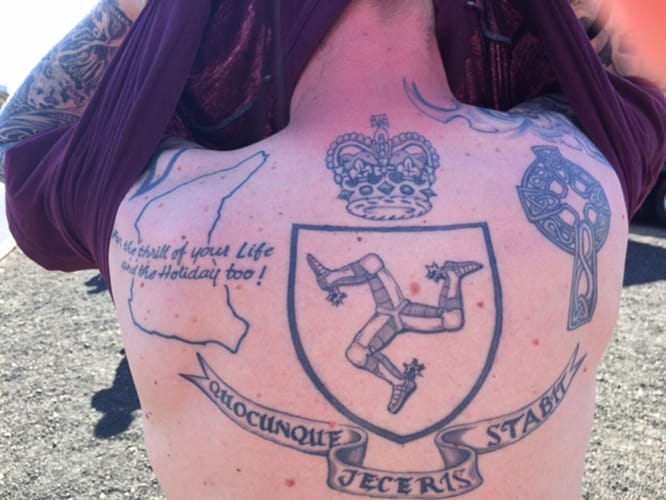 But the epic motorcycle journey, the gruelling push bike ride and the considerable financial sacrifice are nothing to the permanent etchings on Sebulke’s back.

Yes, Sebulke has had the TT immortalised on his own flesh. His pale-skinned back is tattooed with a Celtic cross, the three legs of Mann (which symbolises the Manx mantra ‘whichever way through throw me I will stand’) and a map of the TT course.

And then there’s Judith and Mauro Stucki, who frequent the paddock wearing matching TT shirts, TT jewellery and other racing paraphernalia.

The pair make the 1000km journey on a motorcycle from Switzerland to the Isle of Man every year and maintain that they would not miss their annual pilgrimage for the world.

“Words can’t describe how we feel about this place,” said Judith. 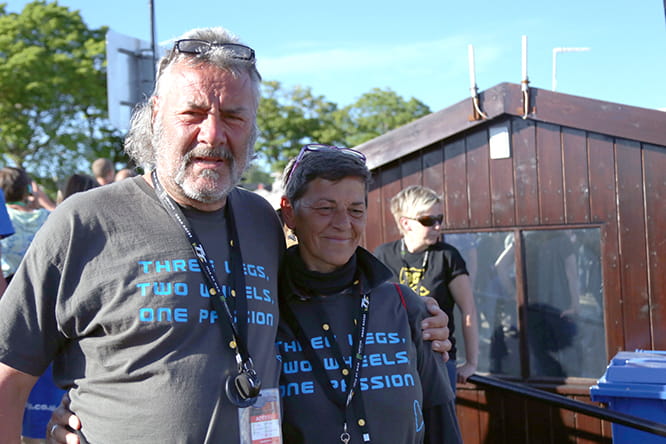 But it was only fluke that brought them here.

“My husband asked me about 12 years ago if I’d rather go to Sicily or the TT. It was one or the other and I chose the TT. I am so happy that with that decision! Now we come every year and we see all our old friends and travel around tis lovely island. It’s all beautiful - the atmosphere and the Isle of Man itself.”

The couple’s TT worship is not limited to Manx shores either.

Back at home in Switzerland, the pair have a house that’s dedicated to the teams and riders to have traversed the world’s most challenging race course.

We have a John McGuinness wall at home and a Fairy Bridge sign in the kitchen,” she says. “Oh, and a Manx flag outside the house.”

Much nearer to the Isle of Man but no less committed is long-time TT fan is Phil Tomlin.

Tomlin’s first TT was in 1972 and he hasn’t missed one since. His loyalty to the event led to numerous hands-on jobs, including managing the pits for a number of years. Now he helps out with competitor Chris Petty throughout practice week and race week, barely getting any time off or rest from the relentless work that’s required as a volunteer race mechanic. 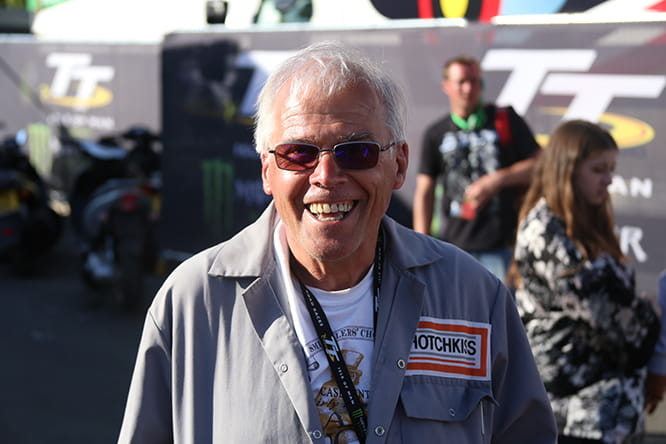 He said: “I’ve been coming here all that time and I wouldn’t miss it for the world. This place is so special to me. In fact, it means so much that I even came during the foot and mouth year, when the racing was called off. I came here and got a ferry to Belfast for the day. I couldn’t not be on the island for those two weeks.”

Asked to explain what it is about the TT that’s drawn him in for so many years he said: “Awesome, awesome, awesome. That 37 and three quarter miles of road means so much to me words can’t describe it.”