With the recent announcement that Leon Camier would be heading to MotoGP with IODA Aprilia this season, we thought we’d take a look back at the career of the twenty-seven year old from Ashford. 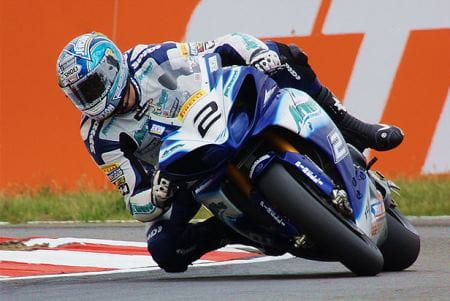 As a kid, Camier took an array of titles over in grasstrack before taking the British Junior 80cc Road Racing championship in 1998. He then moved up to 125cc championships in both the UK and Spain, fighting with Casey Stoner and Chaz Davies, with whom he'd become close friends. He took the British 125GP title in 2001 and finished third in the series the next year.

After a tough year in 125 World championships, Camier came back to Britain to ride a four-stroke for the first time in the British Supersport series in 2004. He finished sixth. He went on to take the title the following year with Padgetts Honda and finished fourth the year after.

Moving up to British Superbikes in 2007 with Bike Animal Honda, Camier had a great start to the season, impressing by taking the lead early on in his very first race at Brands Hatch. He finished second and took third place in the second race later that day. He was back on the podium in the second round at Thruxton and continued to show form until falling in the second race at the third round, Silverstone. After a couple of eighth place finishes, the lanky Brit returned to his top six form until a horrendous crash on the mountain at Cadwell Park saw the Kent man suffer a severe leg break ruling him out for the rest of the season.

Camier’s early season performances earned him a ride with one of the best teams in the championship, Colin Wright’s Airwaves Ducati. In the first four rounds, he didn’t finish out of the top five, taking three podiums along the way. He took his first superbike win in the fifth round at Snetterton but then fell at Mallory Park suffering an injury which would rule him out for the next round. Two more wins that season saw Camier take fifth in the overall championship standings.

Remaining with GSE for 2009 as they switched from Ducati to Yamaha, Camier would have his best season yet. Absolutely storming the field he took nineteen wins out of twenty-six races, finishing on the podium in all but four of them. It was very much Camier’s domination that saw BSB bosses introduce the showdown format the following year. At the end of the 2009 season, Camier took the seat of injured Shinya Nakano on the Aprilia RSV4 for the final two races of the World Superbike season, doing enough to secure a full time seat alongside former GP star Max Biaggi for 2010. Despite taking three podiums including a second place in America, he had a difficult first year in World Superbike, suffering from a fair amount of crashes and technical faults. He missed the final three rounds of the season through injuries sustained in a practice session at the Nurburgring.

He remained with Aprilia for 2011 and had a much better year, taking numerous top five finishes and four further podiums to finish sixth in the championship. That was the end of the road (at least for then) with Aprilia for Camier, as he was ousted to make room for Eugene Laverty in 2012.

Signing for Paul Denning’s Crescent Suzuki team, which was stepping up to the world stage from British Superbikes, Camier returned to World Superbikes in 2012. It was another difficult season for the Brit as he suffered from more injuries. He took just one podium all year, finishing fourteenth overall.

He remained with Denning’s squad for 2013, but didn’t have any better luck. A heavy crash in practice at Aragon saw him ruled out of those two races and struggling upon his return. He took third place in a challenging first race at Silverstone on his twenty-seventh birthday, what would become his only podium finish that year. Camier was involved in the controversial incident at the Nurburgring in which both he and Jonathan Rea crashed on oil left by Federico Sandi’s stricken Kawasaki. Both Camier and Rea claimed marshals were waving green flags suggesting there was no danger. Despite the fast crash, Camier returned in Istanbul, however the unused dusty circuit caught out the Suzuki rider who suffered a nasty injury to his foot which ruled him out until the final round at Jerez. A strong ride on his return saw him take sixth place in the final race of the season. Camier had planned to stay with Paul Denning’s squad in World Superbikes for 2014, but it wasn’t meant to be as Eugene Laverty and Alex Lowes were announced as the team’s two riders. Despite offers from Honda to make his BSB return, Camier opted to take a risk on the IODA MotoGP ride, on a bike he is no stranger too. Largely based on the RSVR Camier campaigned in 2010/11, the Aprilia ART is also the machine Aleix Espargaro enjoyed vast CRT success upon in the last two years.

How do you think Camier will get on?