Jeremy McWilliams: No early retirement for me! 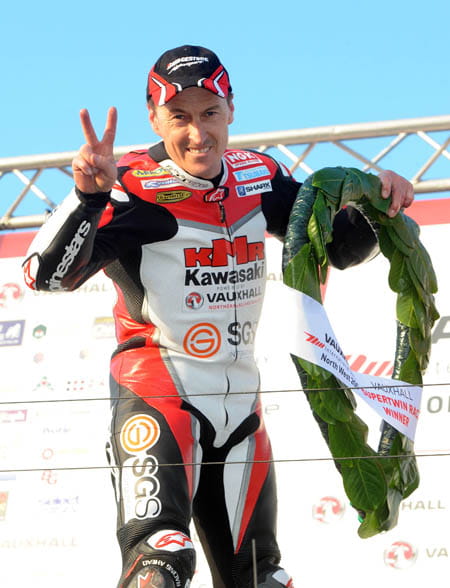 In a month where sports news has been largely dominated by the retirements of sporting greats, Sir Alex Ferguson and more recently David Beckham, Jeremy McWilliams proved that retirement isn’t yet for him as he won his first North West 200 road race last weekend. The 49-year-old fought off competition from younger riders in the SuperTwins event, including Jamie Hillier and 22-year-old James Hamilton, proving that racing on two wheels while doing speeds of up to 110 mph isn’t just for the young adrenaline junkie.

Today, most successful elite sportsmen are usually between the ages of 20 and 35, bar an exceptional few. However at almost 50 years old, Jeremy is looking to inspire the current generation of riders by showing them that their careers can be longer than they might think, as well as inspire those riders who think they’re too old to try and make it professionally. “If you find you’ve got some talent in the sport you can make it at any age,” Jeremy explains. “In my opinion, age doesn’t matter, even if you’re not likely to make it to the top of the sport, there is still a lot of fun and enjoyment to be had – fun and enjoyment that could ultimately be life changing.”

There aren’t many professional sportsmen in today’s world who compete and remain competitive up to their 50s, but after considering retirement a few years ago, Jeremy realised that he still has more to give and he will continue to race on a less intense basis as long as he can remain competitive and gets enjoyment out of the sport.

There are, Jeremy thinks, some perks to being a professional motorcycle racer as opposed to a professional footballer that allows him to continue racing into his 50s. “I don’t train as much as I used to,” he says.  “I’d be lying if I said I went to the gym two or three times a week! All I am interested in doing is remaining bike-fit.

“However, I did have a proposal to race a CRT bike not long a go but I wouldn’t have been physically up to it, so that would be one downside of letting my training take more of a backseat.”

With Jeremy in the latter stages of his career, we were interested to hear what drives him to compete. “I feel that if I packed racing in today I would miss it,” he says. “What drives me is the pure fun and enjoyment I get out of racing, however if my lap times drop dramatically from what they have been in the past, I won’t be forcing myself to carry on. I know that it will be the time to hang up the leathers! However, while I am still getting invitations to ride and I remain fit and fast, I will continue.”

Jeremy is certainly a refreshing addition to the world of professional sport; he is someone who simply doesn’t let the luggage that goes with it affect him in anyway, someone who does what he does – simply because he loves it.