Inside The Philip Island Classic 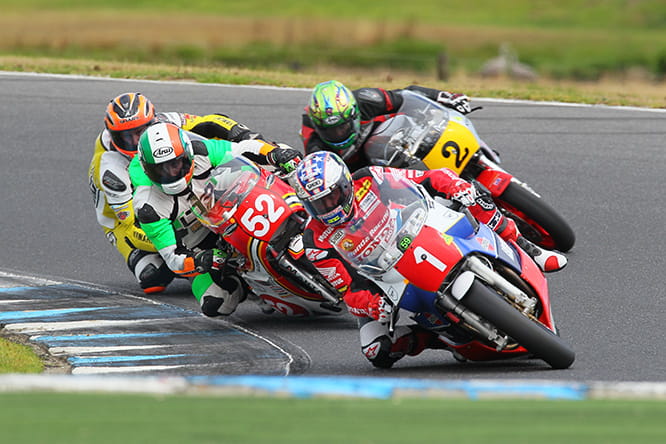 The International Island Classic held at Philip Island on the Australia Day long weekend each January is the largest historic bike race in the southern hemisphere and the third largest motorcycling event on the Aussie calendar, behind MotoGP and World Superbike.

The event continues to grow each year with over 350 racers on nearly 500 bikes attending the annual pilgrimage for classic bike racers and spectators of all ages who are quickly turning the Island Classic into a must attend event for motorcycle racing fans.

The main drawcard is the International Challenge between Australia, UK, USA, New Zealand and the new kids on the block for 2016, Team Ireland.

Attracting a super competitive field made up of winners from Grand Prix, World Superbike, Isle of Man TT and National Championships, 8 riders from each of the International teams complete in four 6 lap races with the accumulated points determining the winning country.

The US went on a serious recruitment drive for their 2016 campaign recruiting former AMA 250GP gun Nick Ienatsch who made his Island Classic debut on a Spondon Yamaha TZ750 two-stroke and former AMA regular, Pat Mooney.

The Kiwis also lifted their game for 2016, recruiting a new Team Manager in the form of racing legend Graeme Crosby and riders that included Pete Byers and Vince Sharpe well know from the 80’s Aussie production and superbike era, plus Damien Kavney, who was fourth overall in the 2015 International Challenge individual standings. 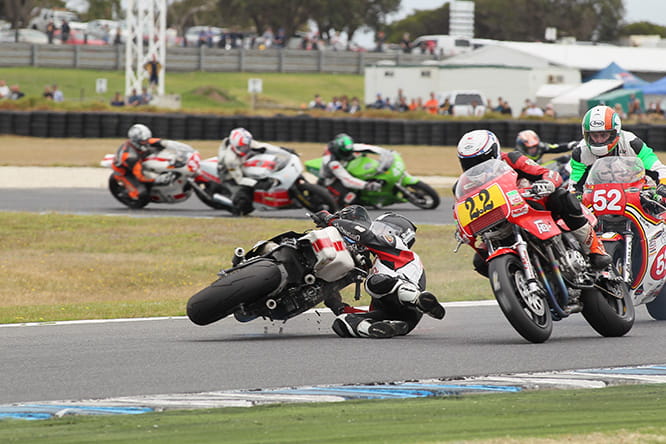 The Aussies had clean sweeped the main event, since it began in 2005, until last year when the UK team won, a feat which they backed up again in 2016.

Wet qualifying on Friday saw many riders sit out and wait for the dry Sat and Sunday, which included a bit of rescheduling by the organisers, but the real action was the individual points score challenge with Northern Ireland’s GP veteran Jeremy McWilliams leading the way for Team UK to convert a day one 12-point team deficit into a 99-point victory over the Aussies, with newcomers Ireland impressing in third followed by the USA and New Zealand. 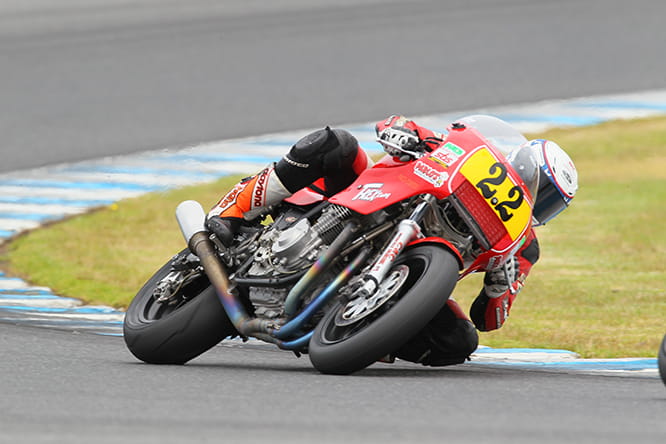 Metcher set the fastest lap of the weekend of 1min37.287secs in race three and said, “ I couldn't be happier with how it's all turned out," Metcher is back at Phillip Island to wildcard at the opening round of the 2016 Superbike World Championship.

The highest Irish point-scorer was Sydney based expat Paul Byrne in 11th overall, a top 10 finish gone begging when the affable lad stalled on the grid in race four, while the top point-scorers for America and New Zealand were the impressive Pat Mooney on his Harris Yamaha in 16th and Pete Byers finishing 20th overall.

McGuinness summed up the International Challenge perfectly last year, when he commented “I underestimated how fast the racing is around here, doing 37s on bikes that are 30 years old,” he said. “I was crunching my plums in that last race trying to keep up, and it was mega enjoyable.” 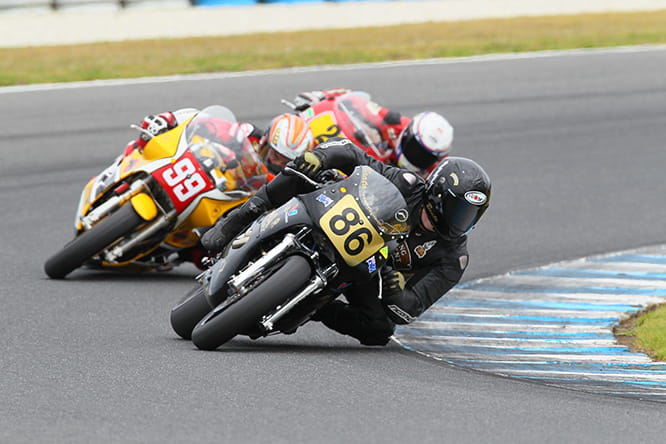 A standout in the fast Phillip Island corners was Aussie Beau Beaton. Clearly down on top speed, Beau rode the wheels off his Irving Vincent special to win both races on Sat until bike gremlins struck on Sundays race 3.

“Both Jeremy and Jed are giving it to me that’s for sure. It’s no walk in the park,” explained Beaton. “I’m 20km/h down on Jeremy, so we really have to push hard off the turns and work our strong points.”

The International Challenge bikes are classed as P5 Forgotten Era (1973-1982), however these aren’t the old bangers you would expect to see fanging around, in fact they are super trick and beautifully prepared circa 180hp machines.

However, the rules for the P5 International challenge bikes have always been a tad contentious, the organisers trying to adapt to the rules from various countries, which has resulted in 180+hp fire breathing bikes with reliability but a dream.

Classic teams bringing 6 spare engines to a race meeting is not really in the spirit of things.

Mix that sort of power with original crankcases and you have a recipe for frequent engine grenading.

2016 didn’t disappoint the engine gods with Ryan Farquhar’s making the biggest sacrifice causing a lengthy oil slick and subsequent clean-up delay when a conrod sliced through his crankcase virtually cutting his engine in two.

It’s certainly an exciting spectacle to watch chassis twisting and tryes squirming, that’s proper racing, but the subsequent downer is the class tuning into chequebook racing. Leadership is required to prevent costs getting even more ridiculous in the future. 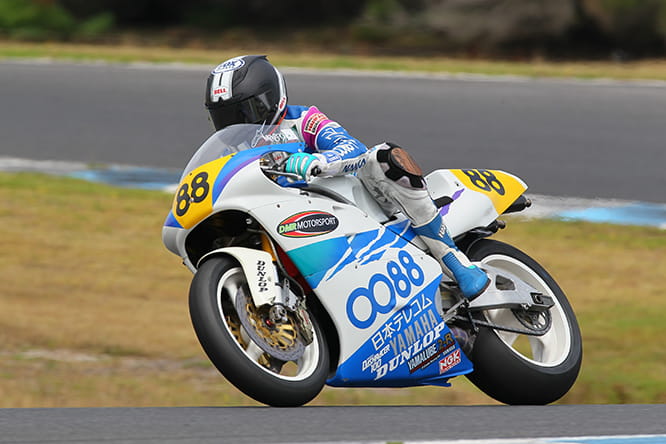 This authentic machine from Magoo’s Japanese championship days has been fully restored to its former 500 2-stroke glory and it sounded fantastic as the former 500gp winner let rip around the Island.

The bikes owner, Tom Dermody from DMR motorsport had perhaps the coolest garage with over $1m worth of beautifully restored machinery. Check out the garage walk through video:

However it would seem the organisers had a major fail when Magoo only got one flying lap on this machine, leaving an very excited crowd wanting more, a real shame. 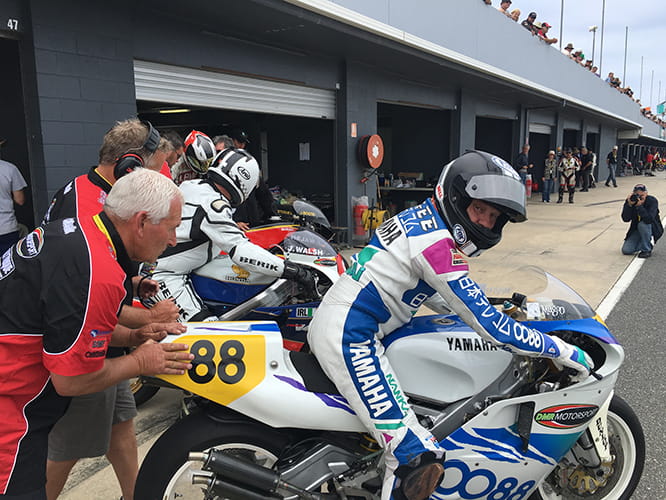 Well, ask any rider, from Rossi down to the clubby, and you will hear its their favourite track – its that simple - the place is majestic, located off Australia’s southern coast, near Melbourne with old school fast and flowing corners rewarding the brave.

This was my second Island Classic, the first in 2014 racing for the Kiwi team after a 20 year sabbatical and the last time I raced. This is typical with many of the riders, coming out of the woodwork for their annual Island pilgrimage. 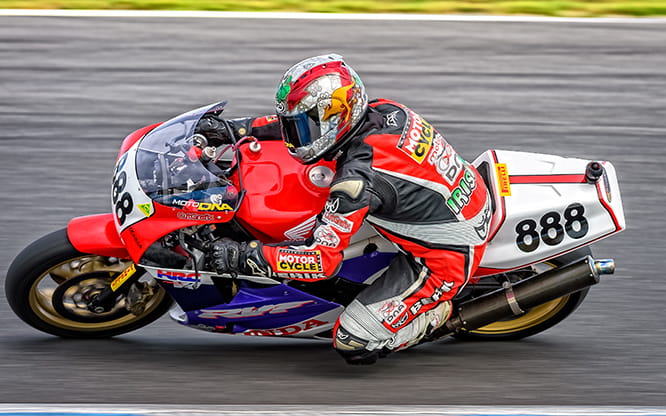 This author grew up watching Joey Dunlop racing his Honda V4’s around Ireland and the Isle of Man, and then raced against RC30’s on a trusty TZ250 in Irelands unlimited class so it was a dream come true when DMR motorsport boss Tom Dermody offered me an RC30 to race at the Island Classic.

As a former International Motorcycle Road Racer, MotoGP Engineer and Moto Journalist, I have ridden a few bikes in my time and they say you should never meet you hero’s, but in this case I was not disappointed.

The RC30 turned out to be one of the most beautifully balanced bikes I have ever ridden. Progressive two wheel drifts around the off camber turn two on the latest Pirelli slicks proved testament to its heritage.

The bike handled really well out of the workshop, only minor adjustments needed to cope with the high-speed turns that are Phillip Island.

We had a few challenges in practise with the fuelling, the bike spluttering and surging from initial throttle opening at the apex.

However with a little work on the needles, my Kiwi spanner men Terry Reed and Tane Symons had the bike pulling cleanly through the revs.

If you have ever heard an RC30 you will know how fantastic it sounds. All I can say is you know you are alive when you are riding this beautiful machine around the Phillip Island circuit.

Check out the 360 video to see for yourself: 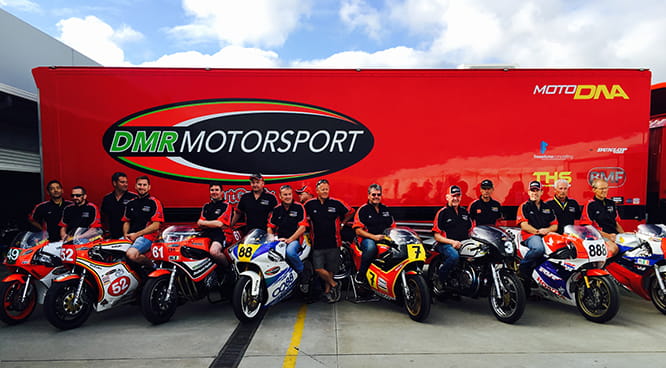 There is no doubt the Island Classic is an epic and unique event growing in popularity each year.

If you asked the 350+ riders why they race at the Island classic, most would say it’s the camaraderie as well as fanging around the magnificent high speed Island circuit.

The Island Classic reminds me of how much fun racing was back in the day, around the paddocks of Ireland, UK and Europe - clean hard racing, riders sharing parts and great fun bench racing in the pub afterwards.

Open garage access for the punters to chat with the riders and mechanics and to drool over exotic race weaponry plus the fickle Phillip Island weather coming good when it counts, all creates a great atmosphere for competitors and spectators alike.

However the event showed glimpses of becoming a victim of its own popularity this year.

Oversubscribed fields leave little room in the schedule for the inevitable engine blow and clean ups and the organisers struggled with some already short races cut to a ridiculous 3 laps.

But this is Phillip Island and riders will put up with a lot just to ride this majestic circuit.

This years Island Classic was best summed up by local journo Chris Dobie “The win at all costs mentality never leaves a racer, and that’s why the Island Classic makes for incredible racing because you have all these retired, frustrated racers with a heap of talent, all desperate to have a big go, anytime they get near a race track.”

Mark McVeigh showed glimpses of speed during the 90’s racing in the competitive Irish, British and European 250GP classes competing against McWilliams, Crafer, Jacque, et al before retiring prematurely due to injury.

A MotoGP career then beckoned, first as a Mechanic and then Engineer. Now based in Australia, ‘Irish’ is busy running the motoDNA Riders Academy plus scribing in Tech Moto Journalism.