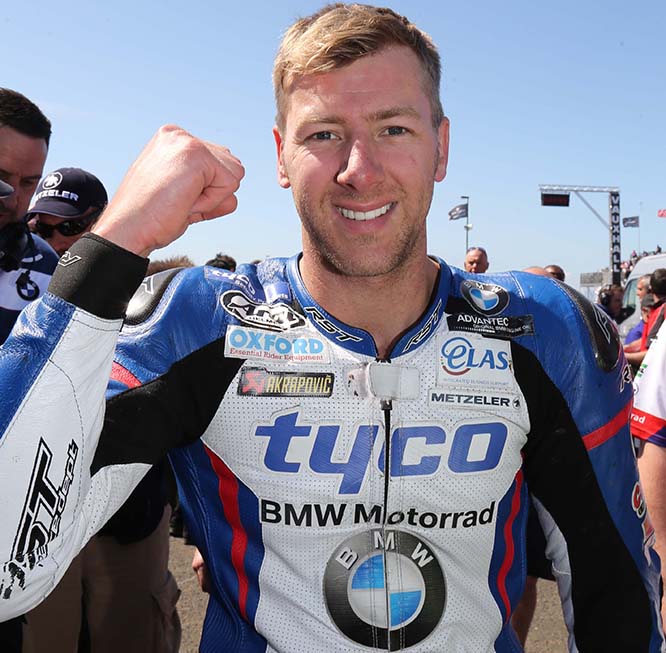 Ian Hutchinson’s remarkable return to the winners’ circle was one of the biggest stories of last year’s Isle of Man TT. The Bingley Bullet took victory in both Supersport outings and the Superstock class while also pushing Bruce Anstey all the way to the end in the Superbike race.

A small mechanical glitch saw him unable to mount a strong enough challenge to stop John McGuinness in the blue riband Senior TT, but he was still able to finish second with his fifth podium of the week.

Switching from Paul Bird’s Kawasaki team to BMW power for the 2016 season, Hutchinson is one of the odds-on favourites for victory this year.

With a strong presence in the British Superbike championship, his Tyco BMW enjoy one of the most extensive pre-season testing regimes of any road racing outfit, taking Hutchinson along with BSB stars Christian Iddon and Michael Laverty, plus superstock champion Josh Elliott, to Spain for two weeks of action earlier this year.

Keen to get going and familiarise himself with the S1000RR, Hutchinson set off to Spain a week earlier than the rest of the Moneymore team to wrack up a few laps on a superstock spec bike. He’s also kept himself race sharp by competing in the National Superstock 1000 series, where he’s finished on the podium in all three rounds to lie second in the championship.

“It wasn’t that I was worried about getting on with it, but I didn’t want to bring anything I’ve picked up from other manufacturers before and try to turn my new bike into something it isn’t,” he said speaking exclusively to Bike Social.

“We got out to Spain and did a lot of laps on the superstock bike so I could understand exactly what the BMW was like to ride and then when the superbike came out I could just work on a BMW rather than trying to change it into something else. As it happened, I got on with the bike from day one so it’s just been about having fun on it right from the start. I’ve not really changed anything, I’ve just been riding around and enjoying it, getting bike fit and miles under my belt.”

A key advantage for the BMW over some of its older rivals is straight line speed, but Hutchinson says he hasn’t noticed that the bike is particularly fast as it’s so smooth to ride.

“Everyone talks about the speed of the BMW and to be honest it doesn’t feel that fast to me but it must be as it’s visibly quicker than other bikes,” he said. “It’s just so rideable, you can’t really feel the speed as it’s not like an aggressive bike that exaggerates it, it’s nice and smooth. 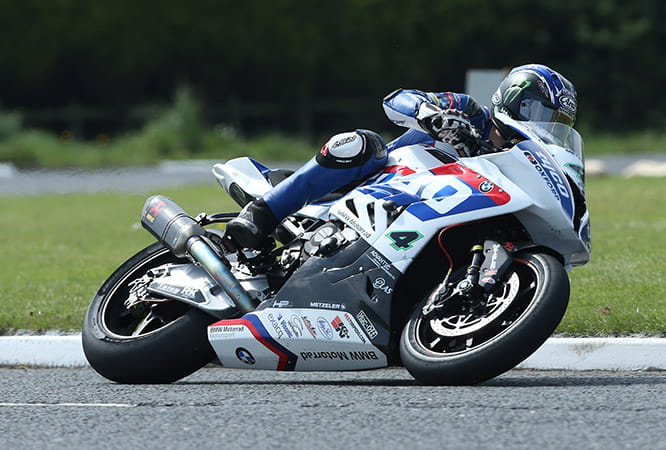 “A strong point for me is how balanced the bike is, you can do lap after lap without getting tired on it! It’s relatively easy to make it do what you want and you don’t have to throw it about and that’s great for the TT course.”

After a difficult few years, Hutchinson started last year’s races from number nine, something he believes hindered his chances as he’d encounter more bikes on track. This year, he’s back at his famous number four – the number with which he went on to win five TT races in a week in 2010.

“I’m glad to be back at number four,” he continued. “I’ve never really had a thing for numbers and it’s no superstition about winning the five races on number four, I just like starting from there.

“It was hard work last year from nine as I had to pass an awful lot of bikes in the race and then had bikes following me and was towing people along. Superbikes don’t handle too well with a bike in the slipstream and they are hard enough to ride without, and then on the 600 it takes all the speed out when you’re towing someone so it’s definitely better for me to be further up the front.”

Despite being listed as a clear favourite alongside the likes of John McGuinness, Hutchison is keeping a level head and acknowledges it is never so clear cut when it comes to the TT.

“Anything can happen,” he says. “Just because people are tipping you as a favourite doesn’t mean it’s going to come out that way. I’m not going to start thinking it’s going to be easy, because it won’t be. I have to keep working, the same as I’ve always done and keep focused on the job I’ve got to do.”

Hutchinson’s five victories in a week during the 2010 TT is something that will go down in history, but the 11-time TT winner is convinced it is a feat that is possible to repeat.

“Of course five is possible again, but everything has to be right,” he says. When you ride for a manufacturer, if their three bikes aren’t the best bikes out there it’s a bit of the unknown but now I’ve got the best of both worlds with BMW Superbike and Superstock and then the Yamaha R6 in the 600s.

“I know all three of my bikes are capable of winning the races so from there on it’s down to the team to make the bikes good, and they are doing a good job of that at the moment having dominated the first round of BSB, and then finally it’s down to me to get it to the end.”