How to launch a Superbike 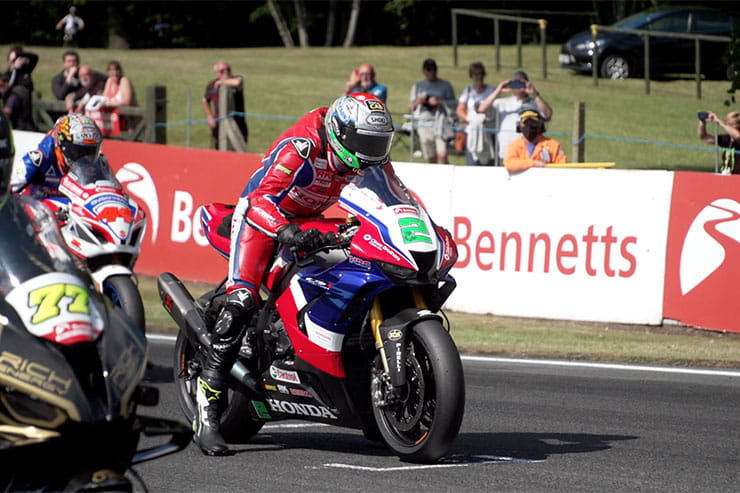 Above: one frame before the lights go out. Revs high, first gear engaged, clutch at biting point

When 29 Superbikes roll slowly into position to line-up on the grid after their Formation Lap ahead of the next Bennetts British Superbike race that you watch, pay close attention to the actions of each rider. There are a matter of seconds before 29 x 240bhp aim for the same apex into turn one. We’re looking at professionals at the top of their game in terms of a national racing championship – these racers know they need to make the best possible start to give themselves a fighting chance later in the race.

The handful of seconds between the lights turning red and getting out of the first corner unscathed and in the ideal position can be decisive.

And while we’ve become familiar with MotoGP bikes and their Transformer-esque squatting on the grid with the new-fangled ‘holeshot devices’ – demonstrated with most success by those riding a Ducati - that technology doesn’t exist in BSB because it doesn’t comply with the regulations. There’s no launch control either, leaving the rider with all the responsibility of harnessing an awesome amount of power compared to how light the bikes are.

But just how does a rider approach the start of a race, from 15 minutes earlier when they arrive on the grid? What processes do they run through, which buttons do they need to press, how do they warm their tyres and brakes enough but not too much, what songs do they play in their headphones, what’s in that drinks bottle, which superstitions do they have?

Some remove a tear-off, some fist-pump their chief engineer, some place two feet on the ground as the race begins.

Honda Racing’s Glenn Irwin is into his second season on the Fireblade having shown some serious Championship credentials last year. He’s a seasoned professional and nowadays goes through the motions as if they were second nature so when quizzed about breaking down that process from lining up on the grid 15 minutes ahead of the lights going out, all while perched on his race bike placed in the pole position slot ahead of the Oulton Park round recently, he got a little stumped.

Here’s how he dissects those few minutes:

“You’re always aware of the spectators. I like the moment on the grid, everyone is different but I’m quite relaxed. I’m quite chirpy if Whit and the boys come and interview me (for Eurosport or Quest’s TV coverage) I don’t get too stressed.”

“I’ll often get off the bike and have a little stretch and have a little bit of a pep talk with the crew. Sometimes you just need that eye contact, you know. Then you’re waiting for the grid to clear then it’s the green flag.”

The left glove usually goes on first. I’ll drink some energy drink then finish with a drink of water, sometimes the nerves give you a dry mouth.”

“The mechanics will leave in an order and the boys will give you either a fist-pump or a handshake which is nice. It’s the last ‘come on, let’s get stuck in’ which is cool when you really think about it because there’s a load of adrenaline, nerves, excitement, pressure, emotion.”

“I tell myself to breath, just breath then a little bit of a head shake. Some of the riders are going bananas, some are keeping calm. If there are nerves, usually on the out lap (formation lap) they all go away. It’s so strange.

[On the formation lap} “I usually go off slow if I’m on the front row. Some people do a practice start and go steaming in trying to guess their braking marker but 3 minutes later it’s completely different. We know how to do it by vision or feel. I couldn’t look for a braking marker into turn one if there’s two of three people alongside me. If I brake there and they brake later it’s no good. There’s a lot of hustle and bustle but yeah, those nerves go away.”

“I go off quite slow and then I try to race a bit of the lap to get to the front, then I drop back in and tend to do a lot of stoppies coming up to the grid, whether it puts any heat in the tyre, probably not, I think even weaving is a load of nonsense at the speed we do it at but it’s for your own head! I like to stoppie to get my brake lever feeling nice and get the pressure built up.”

“Then it’s sit on the bike, legs down, wait for the green flag when everyone is in their position.”

“Lights come on and I hook it into gear. Sometimes last year, we worked with lights that give an optimum rpm but I’m old school, with motocross I can feel, I like to do a real sudden blip. Then it’s about getting it off the line, and thankfully the Honda Fireblade is a dream at this. I don’t have to use the thumb brake to stop the wheelie off the line, but the most important thing is how smooth you are with the clutch.”

“Once the clutch is out then it’s about thumb brake and throttle. It’s also quite key to get up the gears early. You want the bike to not wheelie so you short shift to second but you always have to have some power so you can’t shift too soon. I’ve never been asked this question and it’s second nature to us so sometimes when you break it down… there’s so things you’re doing in a split second for one objective.” 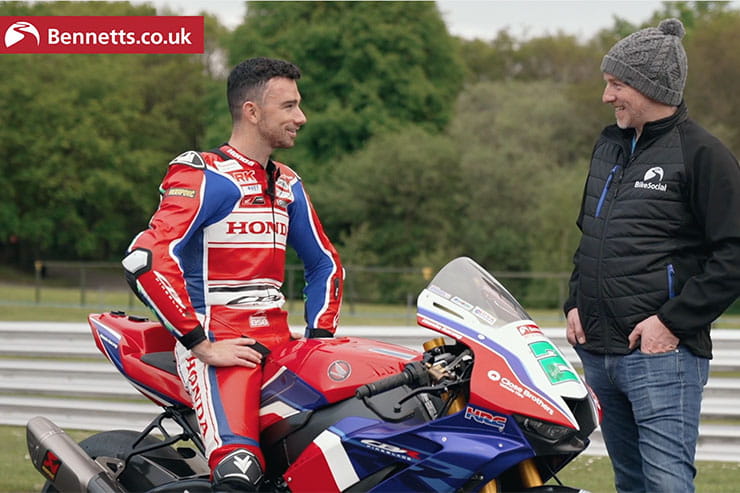 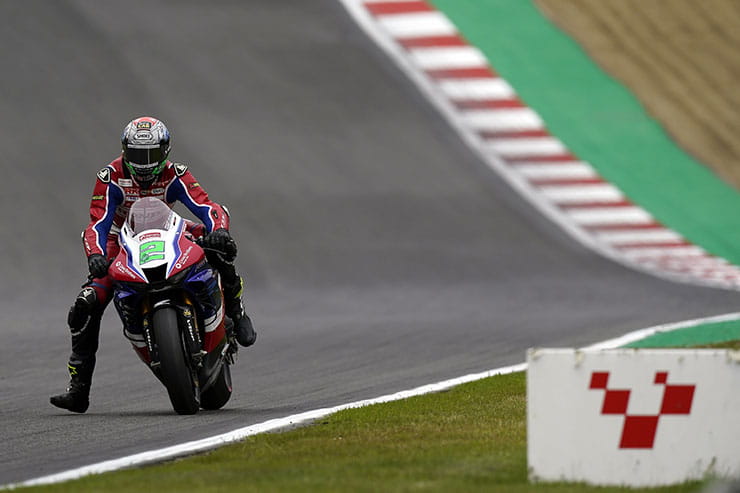 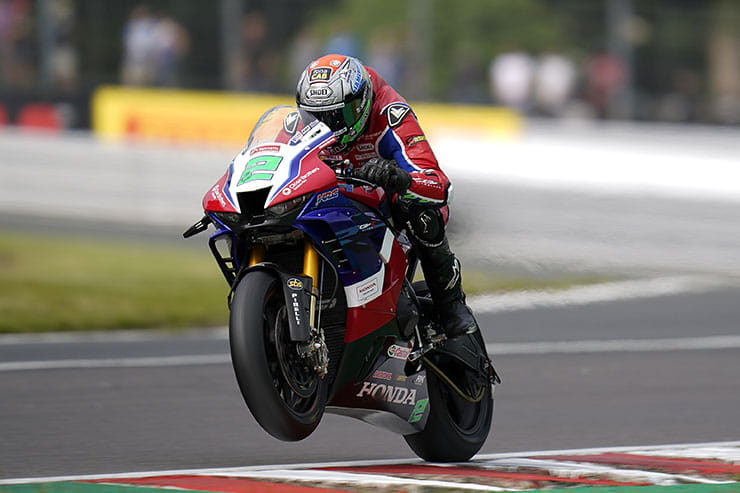 Above: Glenn breaks down his start line procedure then demonstrates his prowess at Brands Hatch and Oulton Park

Start Function, Launch Control, Holeshot Device, or even Wheelie Control; pick a name but every team is at in MotoGP by allowing their rider(s) to hit a button when they line-up on the grid which electronically lowers both the front and rear of the bike. This drops the centre of gravity and, when the clutch is dropped/throttle applied, dials out as much wheelie as possible as the rider struggles to get the power down at the beginning of the race and give themselves the optimum position heading into Turn 1.

“One of these holeshot devices would help for sure but a MotoGP bike has close to 300bhp, about 60/70 horsepower more than ours and they need them [the holeshot device]. These [the BSB bikes] are so fast but you can get away without launch control,” says Irwin.

Irwin also believes that by allowing the rider to control their own launch makes it more entertaining for the spectators as “we can all make a mistake sometimes” as well as demonstrating more rider skill.

And he has faith in that ability plus the functionality of his bike, “My job is to see that red light go out before it goes out and I feel strong in that area. So when I’m sitting on the Honda if I have a lowly grid position I don’t feel that’s where we’re going to be into turn one.”

That start line procedure has to be nailed perfectly too because, “it’s hustle and bustle when you get to that first corner, it’s ignorant, we’re nasty to each other… within respect. You don’t give anyone and inch and if someone’s on the outside of you and you’re close to the kerb on the outside of the first corner, chances are you’ll use all the kerb and make them roll the throttle. It’s not dangerous, it’s a tactic. We might move across after we go off the line as well to make other people shut the throttle a bit, within reason. I might have been a little too close at Donington last year to Josh, I can understand that looking back. Every rider is doing something different, it’s fun!”

The riders are well versed in the process too, they’re experienced athletes whose reaction times translated into throttle/clutch balance (and in some cases, thumb brake application) can be the difference between winning and not.

Irwin wraps it up underlining its importance, “When Annabel waves the green flag, you are so focussed on those red lights. I’d be confident sitting here [P1 for our interview] on the Honda Fireblade that we would arrive in the first corner first. In BSB it’s so important, the start is so crucial. The qualifying is so critical. It can make your race. If you’re down in 12th at the first corner with the level of depth [in this field], everyone is fast, you’re making your own bed. This (the Fireblade) gives you an opportunity to get out of jail if you’ve not qualified so good.”

BikeSocial Members are entitled to many exclusive Bennetts British Superbike experiences, click here to see them all.