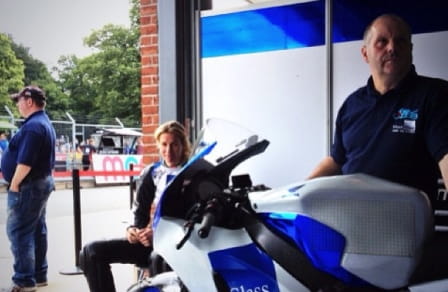 There is no shortage of women riding motorcycles on the public roads but all too few are taking up the sport of racing – currently there is just a handful of the fairer sex taking on the male dominated sport, but now there are a couple of initiatives aimed at introducing more women to the thrills and excitement of participating in racing.

Any ladies looking for role models to follow, then, look no further than Jenny Tinmouth who is riding well and fast in the country’s premier series, British Superbikes, in which the Ellesmere Port rider aboard her own Two Wheels Racing Honda has the distinction of being the only woman to score a point in that championship.

Jenny, by the way is an all-rounder, winning the UK Electric Bike Championship three years ago and also being the fastest woman around the 37.73 mile Mountain Course,  lapping at an average speed 119.945mph.

And there are others running within the BSB paddock, among them Sam Burman, Stephanie Waddelowe, sometimes Sandra Stamova, and when she return to fitness from injury Catherine Green who last year hit the headlines as the first woman to win a British Championship 125GP race at Cadwell Park.

Not forgetting Maria Costello MBE who is concentrating mainly on road racing at the moment, having lapped the TT course at 114.73mph, taken a podium finish in the Manx Grand Prix and recently riding for an all female BMW Classic team in the Barry Sheene Trophy at the Goodwood Festival.

Maria, by the way, is central to one of the schemes to get more women riding on track.  She will be instructing and advising participants in a women only group in a trackday at Silverstone on Thursday 3 October.  The sessions are aimed at riders of all abilities and will give participants the opportunity to experience the thrills and excitement of riding a circuit, and maybe wanting to do more in the future and look to taking up the sport.

That is also the driving ambition of the recently formed  British Womens Motorcycle Racing Club who say they are trying to answer the question "why are women still few and far between in motorcycle racing sport?”

The BWMRC is set to run its own team in the Triumph Triple Challenge and has also set itself the target of getting  females to change the way they think about being involved and then themselves becoming role models to a younger audience.

They are making a positive start. Currently they have two female riders signed up for their team. Emily Coglan, co-founder of the BWMRC and national grass track and speedway sidecar passenger and Nadieh Schoots, pro super sport rider. The team will primarily be run by females, making  it different from every other team and thus  getting it  noticed.

They are both important first steps to increase participation in the sport.