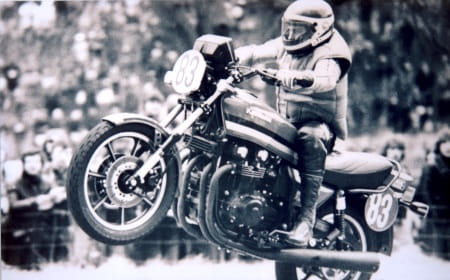 Some three decades ago a young “would-be champ” Aussie arrived in the UK determined to build his career as a professional rider en route to taking the sport’s elite 500cc World Championship.  Wayne Gardner achieved that dream, and this month he will be making a nostalgic return to one of the race circuits that helped him on the way to fame and fortune.

He was the racer who arrived in 1981 with the spread handlebars Moriwaki Kawasaki, prompting a more unusual “sit-up” riding style, but he proved that effective and had the regulars taking note of this talented newcomer with some stunning performances that put him in contention for the title first time around.

But it was the switch to Honda for 1982 that made the telling difference for Gardner and it was with that marque that he makes a return to ride Mallory Park on Sunday 14 July as he headlines the “Past Masters” feature at the annual VMCC Festival of 1000 Bikes.

The man who won the Streetbike Championship in 1982, ran third in the Superbike series that season and the following year took the TTF1 crown and figured prominently in the British 500cc series and the Masters, will be showing his speed and style at the Leicestershire circuit aboard an ex-works Honda RS500, a bike that took him to the British title in 1984.

“It's been a long time since I was on a motorcycle at Mallory Park and I'm sure it's going to be a nostalgic weekend for me,” reflected Gardner who will be providing instant and moving nostalgia.  “I'll be riding a Honda RS500, which is the same bike I used to race in the early 80s in the British Championship, and I can't wait to get back into the seat.  Britain was my launch pad to Grand Prix, and so it'll be nice to come back and thank all the fans for supporting me in the early days and enjoy the weekend with them."

Gardner, the winner of no less than seven titles in his short, meteoric British race career, prior to his graduation into Grand Prix and with it the World title in 1987, will be sharing the track-time with a number of his former rivals and other big name riders, among them four times World Superbike Champion Carl Fogarty.

Phil Read, Mick Grant and Jim Redman will be at the event as will Christian Sarron, John Cooper, Sammy Miller, Jamie Whitham, Rob McElnea, Tepi Lansivouri, Stan Woods and Tony Rutter. Bringing the event right up to the moment, 20 times Isle of Man TT winner and outright lap record holder  John McGuinness, with his Honda TT Legends team-mate Michael Rutter and team-boss Neil Tuxworth, will bring what the organisers describe as some very special machinery to the event. And, the ex-works Norton Rotaries will be out, with former British Champion Steve Spray joining ex-team mate Trevor Nation and Terry Rymer.

The festival, held over 12-14 July, is about bikes of all ages and types, the people who rode and still ride them, owners clubs,  an auto-jumble, trade areas, and in the evening bands, bars and chat-shows.  It is a relaxed atmosphere, time to savour and meet, and for the 1200 members of the public who have pre-booked to do so, the chance to lap the “friendly circuit” on their own bikes.