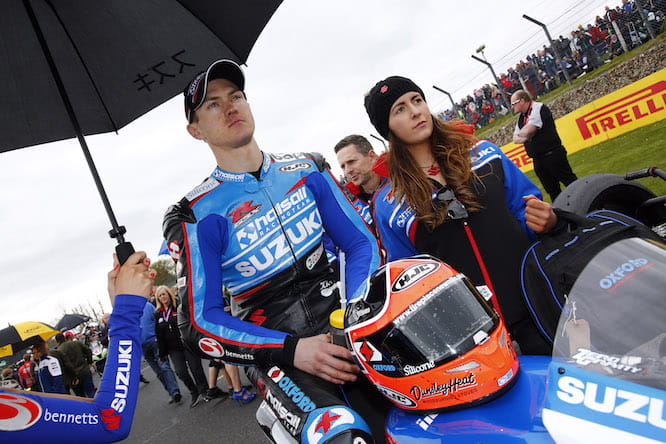 Bennetts Suzuki rider, Christian Iddon dramatically crashed out of Sunday’s first British Superbike race on the opening lap. As he exited Graham Hill Bend, a notorious spot for crashing at Brands Hatch, and sat his GSX-R1000 up, the rear of the bike came round on him and he was launched into the sky. He landed in the middle of the live circuit and was hit in the leg by another rider.

The first news back from the medical centre was that he ‘might’ have broken his leg. That news was followed by a text to his mechanics saying ‘get the bike ready lads, I’m not out yet’. This was before he’d even had an X-ray to determine whether or not the leg was broken. It was.

He’d broken his fibula; the smaller bone in the leg but even so, it’s still a broken leg.  Despite this, he still wanted to ride. The team worked hard to rebuild his bike in the two and a half hours before the second race. They succeeded and after spending fifteen minutes trying to get his boot on, Iddon rolled out onto the Brands Hatch circuit.

During the sighting lap, which isn’t very long at a circuit of just 1.2 miles in length, he says the pain was so unbearable he didn’t think he’d be able to race. However, he didn’t pull in. He asked the team to lower his footrest and off he went. He said it felt better on the warm-up lap, but he still had a broken leg. I asked him why he still started the race with the pain as unbearable as it was. “I guess you’ve just got to not give up and see what you can do”, he said. 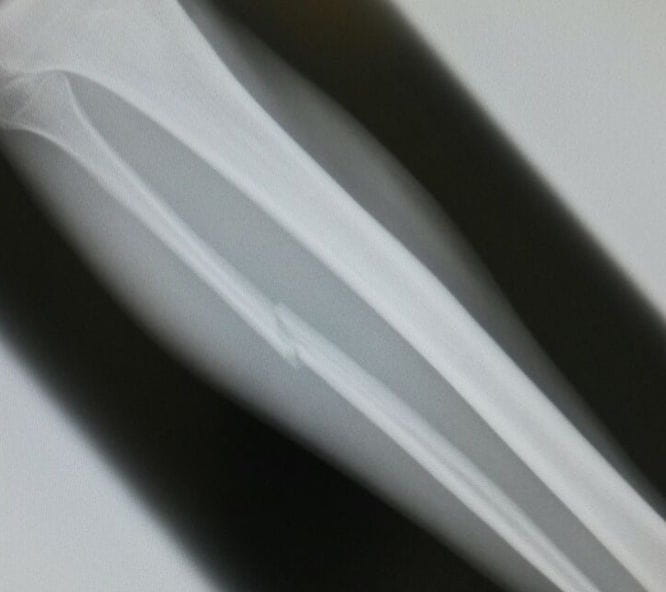 He explained that he thought he might be able to ride through the pain but would only do so if he wasn’t going to be a danger to other riders. If his injury had hampered his control, or made him too slow that he was putting others at risk, he said he’d have pulled in immediately.

However, he wasn’t a danger and he most certainly wasn’t slow. I remember looking at the timing screens and saying ‘Iddon mustn’t have gone out’. Someone responded, ‘No, he has, he’s in 12th’! I hadn’t even looked that far up, I’d assumed he’d be at the back! 12th out of 30-odd riders! It wasn’t just a decent start either, he maintained it for the first half of the race too. Understandably, he dropped a few places as the race went on and sat what we considered an impressive 15th with a few laps to go. Low and behold, the chequered flag came out and he’d made up the two positions he’d lost to finish 12th place. 12th place with a broken leg.

While Christian’s performance was utterly brilliant, it was nothing uncommon in this sport. Across the board, motorcycle racers have ridden with injuries from broken ankles, wrists, legs the lot and taken respectable results. In 2008, MotoGP rider Jorge Lorenzo had broken both of his ankles and couldn’t walk without crutches. He was lifted both on and off his bike yet finished second place in a race against some of the most talented racers on the planet. He couldn’t even stand on the podium without support.

Some people, those with little knowledge of the sport or motorcycling in general, dismiss these feats as riders ‘don’t need their legs as much as they’re sat down on a bike’. The reality is, no they aren’t. When pushing a 200bhp motorcycle to its absolute limit, you’re more standing on the footpegs than sitting on the seat. This enables much greater manoeuvrability on the bike. Try doing that with a broken leg!

You and I will mark these achievements as incredible. Christian says he was just doing his job. In fact, he's dismissed people calling him ‘hard’ by telling them he was crying like a baby in parc ferme after the race. I’ve never broken my leg, but I know if I had I’d have been crying like a baby for quite some time, and that’d be without moving anywhere let alone competing in a 25-lap British Superbike race.