A look at the closest finishes in motorcycle racing 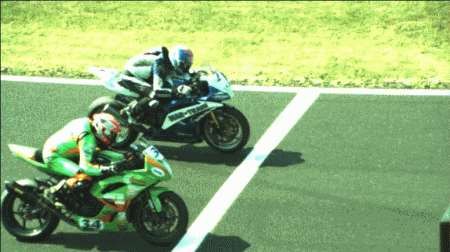 The dramatic climax to the recent sixth round of the Motorpoint British Supersport Championship race in which Alastair Seeley out-dragged Stuart Easton to the finishing line to take a victory which to the naked eye was virtually too close to call provided some interesting discussion at Brands Hatch as to whether there had ever been a dead-heat finish in the sport.

We’ve dug back through the record books and while this result was close, decided with the aid of modern technology, quite correctly given in favour of Seeley, though by only 0.004seconds, a real photo-finish, with the winning margin inches, there have been a number of close encounters of the racing kind.

Among them, the 2011 BSB title clincher.  Remember the thrills and excitement as Tommy Hill snatched the result he needed, second in the final race of the season, and with it the country’s premier crown from under the nose of John Hopkins.  They had slugged it out over an intriguing last lap changing positions five times with the American looking to have the edge but Hill stunned him and the time-keepers backed him confirming his win by 0.006secs.

In between times on the Isle of Man TT, races but effectively time trials as the rider take on the clock, Kiwi Bruce Anstey recorded on of the smallest ever winning margins there, taking the verdict after four laps and 150 miles of hard riding by 0.77secs from Cameron Donald.

But, it has been much closer than that, in fact too close to call, with the first and only, so far, dead heat finish being awarded.  That came back in June 1995 when the late, legendary Steve Hislop was battling for the race win, and the British Superbike crown with James Whitham at Snetterton.  Hislop was keen to hit back, levelling the score after Whitham had won the first of the two races at the Norfolk circuit.  It was fast and frantic as they levelled on the final lap, swooping through the twists and turns and onto the start-finish straight.

They crossed the line together, and despite the sophisticated timing systems, circuit television feed and the broadcast cameras, they could not be separated and in that moment made history as both Whitham and Hislop took the top step of the podium and shared the spoils of victory. It was history making in the UK, but it had already happened in the States when in 1948 at the Lakewood Speedway in Atlanta Bobby Hill and Billy Huber record the only dead heat finish in the AMA motorcycle history.

It seemed that history was to repeat itself in 2011 at Knoxville in the AMA Pro-Racing Flat Track Championship when the timing screens linked to transponders fitted to the bike displayed a 0.000 dead heat, but, the joys of the official timing software brought up an additional decimal point with Jared Mees taking the verdict by 0.004secs from Jake Johnson

But in the Australian FX- Superbike class races at Eastern Creek two years ago two races saw Rick Olson and Pat Medcalf in photo finishes that timing could not separate and dead heats were given. The first time they shared the points for second, the next it was a dead heat for the win.

Amazing action, all part of the special buzz and attraction of motorcycle racing.