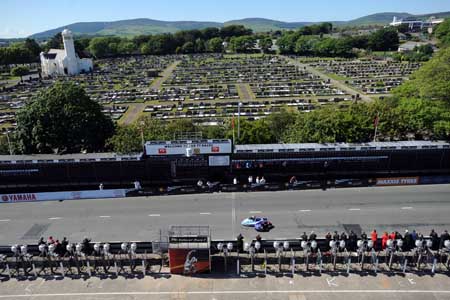 He is the only Flying Scot to have won the World Sidecar Championship. Jock Taylor had a short career but highly successful career taking the title in 1980 but two years later was tragically killed in an accident at Imatra.

Fittingly, his memory is perpetuated by the sidecar racing clan, and also the circuit, East Fortune, where he made his racing debut some 40 years ago, by an annual Jock Taylor Memorial Trophy race. This year’s race, held earlier in the month, pre-empted by a parade lap led by the immaculately restored Yamaha outfit that took Taylor and his Swedish passenger Benga Johansson to the crown was fittingly won by the Edinburgh based Scott Lawrie and James Neave.

Taylor, born in the Pentcaitland, East Lothian, was tempted into sidecar racing as a 19-year-old, at first as a passenger, but in his second season he was driving and soon setting the standard at the sharp-end of the pack. In 1977 Taylor took the Scottish crown and then twice in the next three years the British title.

The Isle of Man TT was a big attraction to Taylor and he made a stunning debut on the notorious Mountain Course in 1978, when with Kenny Arthur in the chair he finished second in his debut race, and followed that up with a third place later in that year’s festival.  Hopes of building on that in the second year were dashed by problems, but in 1980, with Johansson riding “shot-gun” Taylor ran second, and then achieved the dream of winning a TT race.  And for good measure, he broke the lap record.

That victory came amid a golden year for the Scottish-Swedish pairing as they enjoyed podium finishes in all seven rounds of the World Championship, winning four times, at Assen, Zolder, Imatra and then in the last round at the Nurburgring to take the title in style ahead of Rolf Biland

Biland avenged that the following year by taking the crown from the determined Scot who took some consolation by powering in lap and race record speeds as they won the opening TT race, and the going on to complete the double.  Taylor and Johansson were back for more in 1982, hitting back after a problematic first race to take their fourth and final victory on the Island and upping the lap record to 108.29 mph in the process.

Around the TT, the quest to regain the world title continued, with two third places, prior to that fateful race at Imola on Sunday 15 August 1982 when Taylor’s outfit left the rain-drenched public road course and hit a telegraph post. John Robert Taylor, Jock throughout the racing world, succumbed to his injuries that evening in a local hospital, but his memory, and his riding feats live on, particularly at the East Fortune circuit which is just a couple of miles from what was his home village.