Carl Fogarty – one of Britain’s best? 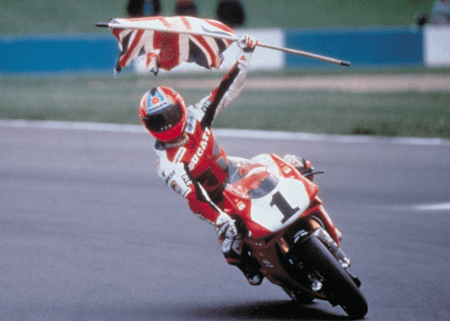 It was a glorious hot summer weekend but the BBC radio reporter covering the European round of World Superbikes at Brands Hatch contradicted the weather forecasters by insisting that whatever they thought, the Sunday raceday would be a “Foggy Day.”  Who was right?  The man at the Kent circuit who had watched the early practice and realised that the “Blackburn bullet” meant business in what was proving to be a season of Carl Fogarty and Ducati domination.

Hard to realise but that weekend fell some 18 years ago, 6 August 1995 to be precise, with Fogarty, the defending champion eager to break his Brands Hatch duck, as far as being a winning rider in the World  series there.  Fogarty was the sporting hero of the day, capturing the headlines not only with his brilliant, aggressive riding but also his often outspoken comments and humour, the latter including naming his kids pet pigs after his rivals.

Fogarty at Brands Hatch that weekend was at his best. Pole start, two race wins amid an environment and atmosphere buzzing with the same gripping enthusiasm that the late great Barry Sheen used to command.  And they saw another Brit, John Reynolds power in a pair of fourths, the second of which was later upgraded to third when Japanese rider Yasutomo Nagai was penalised for a flag infringement.  That came too late for Reynolds to join Fogarty on the podium and share the adulation of a record crowd.

It was vintage Fogarty and typical of a rider who had battled his way to the top, putting his money where his mouth was then the chance of a factory rider passed him by in 1992, so, he went out a bought a Ducati, ran it as a privateer and beat the factory riders at their own game in the British round at Donington Park. He led the first race till be he tumbled but then bounced back to win the second of the two races at the Leicestershire circuit. 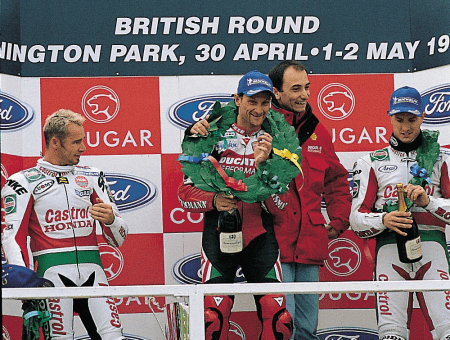 Fogarty had made his point and it was the rider whom he beat into second place that day, Raymond Roche, who took him into the factory Ducati team for the following season.  The die was cast. Fogarty was on the title trail, quickly establishing himself, and taking the fight to the eventual champion Scott Russell and only just missing out on the crown.

The rest, as they say is history.  Fogarty and Ducati conquered the world in 1994 and 1995.  A year with Honda, and second place overall, but then back to riding for the Italian marquee and a further two titles in 1998 and 1999, along the way chalking up a record 59 race wins.   Hopes a of retaining the crown for a further term were ended by a crash and injuries in the Australian second round of the 2000 season.

The fast cornering, hard charging and determined racing style of Fogarty would be seen no more, but the memories of his epic rides remain.