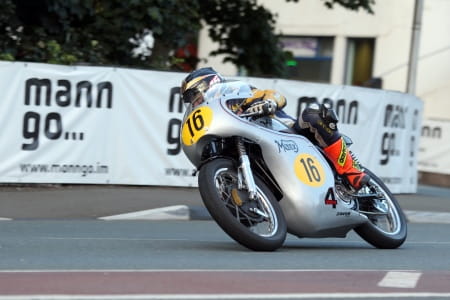 The comment from many observers of modern day race action is that the bikes all look and sound the same – harsh, given the quality of the racings and the high skill levels of the guys at the sharp end, but hard to disagree with.  And that plays a big part in the revival of the historic and classic scene which is currently becoming big business.

Glance back at the recent Festival of 1000 Bikes at Mallory Park where not only the bikes of yesteryear were wheeled out and to give a moving display of instant nostalgia but also the personalites from that era were present, giving the chance to see the former 500cc World Champ Wayne Gardner, meet up with the legendary Carl Fogarty and many more.

And that theme continued across the Donington Classic Festival where the treats included seeing Sammy Miller aboard the 1956 Moto Guzzi V8, a handful of MV Agusta 500s, and the more modern Ducati MotoGOP Desmosedic in the hands of Loris Capirossi. And there were Benellis, Gileras and a 1939 supercharged Velocetter Roarer.  The Classic Motorcycle Club who organised the event counted on some 550 bikes and they are experiencing growth in all of their events, possibly down in many cases to born again bikers who are now able to afford the bikes, such as the Manx Nortons they dreamt of in their youth.

Now the scene moves on with the creation of the Isle of Man Classic TT racing festival, to be held over the Bank Holiday weekend, and decided on the notorious Mountain Course, ahead of the running of the traditional Manx Grand Prix later in the week, an event that attracts mass entries, giving the amateur riders the opportunities to ride the public roads course graced by many of the sporting great from Giacomo Agostini, Mike Hailwood, the legendary Joey Dunlop through to the heroes of today like John McGuinness.

The opener the Classic TT, the 500cc race, on Saturday brings McGuinness, the 20 times TT winner, aboard a twin cylinder Paton that has winning pedigree on the Island,  against Michael Dunlop aboard a Norton.  Other TT favourites at the heart of the action include Cameron Donald riding Matchless and Bruce Anstey on a Norton while Guy Martin has a Molnar Manx.

It is a heady mix of past and present and one that will delight the growing numbers of fans wanting to taste the classic atmosphere but with a modern day twist and there is more of the same for them with the Monday races for 350/250cc machines and the Formula Classic race with F1 and F2 bikes. Around the racing there will be plenty going on, with a paddock carnival at the Grandstand featuring the bikes and the riders and lots of displays, and on Sunday there is the annual Festival of Jurby with parade laps, displays and family entertainment.

Then, after that, it is back to racing with the Manx Grand Prix, and if the Classic bug has not caught up with you, then savour the best of British at Cadwell Park over the Bank Holiday weekend with the latest round of the buoyant British Superbike Championship.