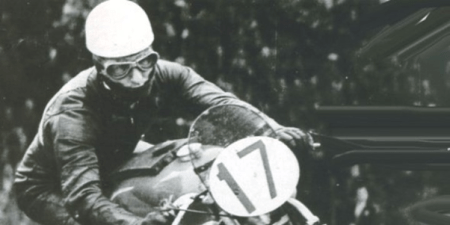 Marc Marquez hit the headlines as the youngest ever rider to win the World MotoGP crown – he took the title at the age of 20 years and 266 days, a figure in stark contrast to the winner of the first of the then elite title of the sport, the 500cc World Championship.  Robert Leslie “Les” Graham had that distinction at the age of 38.

Like so many of his era, and indeed the other three Brits who won World titles in that opening season of the Championship in 1949, Graham was back in racing, his career split in two by the intervention of the Second World War.

Graham, from Wallasey, had raced extensively in the 1930s and 1940s, before serving as a pilot in the RAF, flying Lancaster bombers with 166 Squadron – the Flight Lieutenant was awarded the Distinguished Flying Cross for bravery in December 1944. He served until 1946, when demobbed he was able to resume his sport.

Riding the twin-cylinder AJS, nicknamed the Porcupine as it had pointed fins on the cylinder heads, Graham beat off the challenges of Gilera riding Nello Pagani taking the top title by a single point though the Italian took some consolation by winning the 125cc title on a Mondial.

Frederick Lee “Freddie” Frith was a man of many parts, working as stone mason then a motor trader, amid a strong racing career which saw him win Isle of Man TT races before and after the war. Riding Norton he won the 1936 Junior and followed that with the Senior the following year, along the way also winning the 350cc European Championship.

After military service with the Army during the years of conflict as he worked at the Infantry Driving and Maintenance School at Keswick Frith returned to racing to twice win the Junior TT, the second of those victories coming in 1949 when with a clean sweep of five victories he took the inaugural World 350cc Championship.

And on three wheels, Britain had the champions.  Eric Staines Oliver, like Graham was 38 years of age, as he won, in 1949, the first of his four World Sidecar titles, with in that first year Denis Sargent “Jenks”Jenkinson, a mere youth at 29, in the chair of the Norton powered outfit.

Oliver was the innovator, developing the sidecar, and introducing what was known as the “dustbin” fairing in a form of streamlining while he himself was the first to adopt the kneeling position while driving.  And, apart from racing three wheels, he also raced a 350cc Grand Prix bike.

Jenkinson, an engineering student served in a civilian capacity at the Royal Aircraft Establishment in Farnborough during the war years, before returning to a love of racing or two, three and four wheels, in the latter acting as navigator as Stirling Moss drove to victory in the Mille Miglia. Jenks was also the authoritative Formula 1 writer for Motor Sport Magazize.

The achievements of those four British competitors, given the hardships they and their countrymen had suffered during the War years speaks volumes for their dedication in blazing the trail in that first year of World Championship action that has grown from a six race schedule to the global all-embracing schedule of the present.