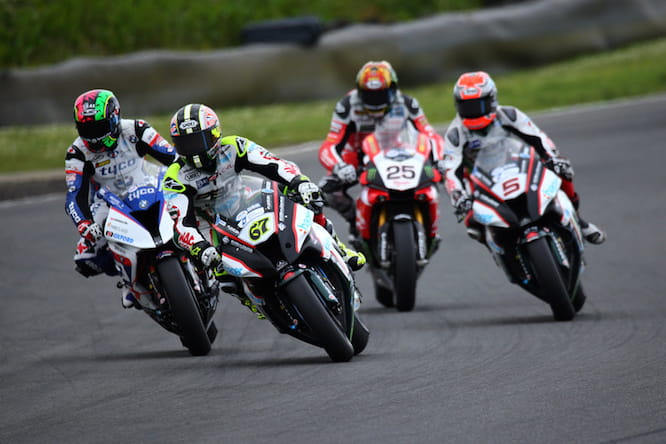 It's yet another weekend jam-packed with racing! The British Superbike Championship is at Brands Hatch for the sixth round of the 2015 series while the World Superbike boys are the other side of the pond in sunny California.

British Superbikes will be one to watch this weekend as the 'King of Brands' trophy spices things up by offering front row starters in race two the opportunity to start from the back of the grid. Should they choose to do so, they will recieve an instance financial award and any points scored in the race will be doubled. Further, to this, should they go through and win the race they will win a Monster £50,000 prize pot.

Shane 'Shakey' Byrne will be looking for his third double victory in a row at his home circuit but a rejuvenated Michael Laverty will be out to stop him after being denied a podium last time out at Knockhill. Will anyone be tempted by that £50,000?

Worth noting that on Sunday, British Superbikes will be broadcast on Eurosport's sister channel Quest rather than Eurosport 2 due to scheduling clashes. Quest can be found on Sky channel 144, Freeview channel 17 and Virgin Media channel 172.

In World Superbikes, Jonathan Rea will look to continue his domination of the 2015 series. The Kawasaki Racing man leads teammate Tom Sykes in the standings by a whopping 133 points. Another strong result would put him in a good position to clinch the title next time out in Sepang with three rounds to go.