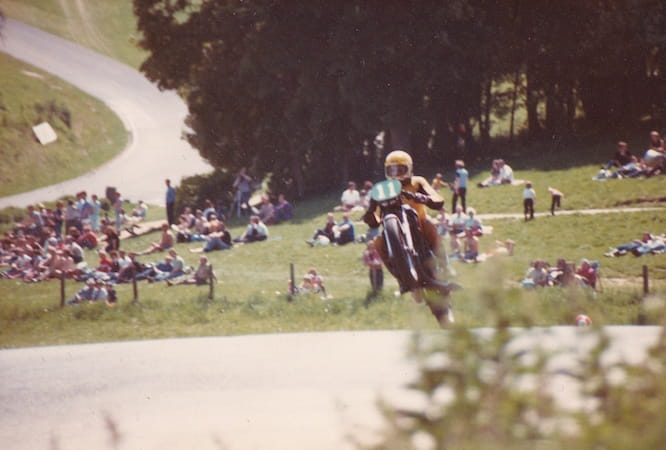 While Mick Crick raced in the original Yamaha Pro-Am series, he can't remember too much about it. 'Too many blows on the head' he says. 'Possibly due to

Pro-Am! I cant remember if my first Pro-Am race was in 1982 or '83 and I've no idea where I actually finished in the championship standings. But I do know my best race results were a 5th and 6th – although I'm probably better known for being filmed or photographed in at least three crashes/pile ups!

When he did manage to stay on his bike, Crick was fast, as various race and championship wins at club level testify. In 1982 alone he won over 18 races, as well as the prestigious Marlboro Clubmans 250 Production Championship. He would later win the odd national 250cc race and was a regular top-five finisher against the likes of Niall Mackenzie, Donnie McLeod, Alan Carter and Carl Fogarty.

Crick retired from full-time racing in 1987 following the deaths of his friends, Neil Robinson and Phil Rawson but has since taken part in various forms of racing from Sidecars to Classics and Motocross to Karts.

Based in Holmfirth, West Yorkshire, Crick now runs his own business (Race Gadgets) which makes quickshifters, airshifters, and downshift blippers for race bikes and cars. He still rides a Yamaha 600 Diversion on the road but had to think twice when asked if he'd race in the Pro-Am revival event. 'I said “No way” initially then had a think about it and realised I really wanted to do it. So I  rang back the next morning a changed man. I've no delusions of getting on the podium though. I'm 54 now so I don’t mind being last these days! If there's 24 riders on the grid then I'm just hoping its not a 23-rider breakaway with me on me own! I'm chuffed and honoured just to be on the same grid as riders I've admired for so long - this is the equivalent of desert island discs to me!