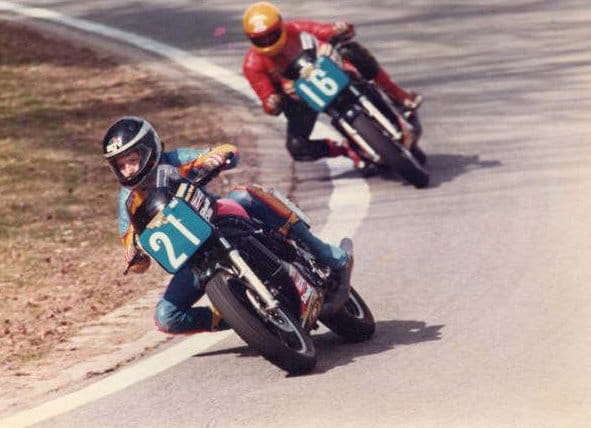 Martin Rice was the overall Marlboro Clubmans Champion of Champions in 1983 and had a few outings in the Yamaha Pro-Am series the following year but found it difficult to switch between production machinery and thoroughbred racing bikes. 'I was never much of a proddie boy to be honest' he says. 'I think I got some top ten finishes in Pro-Am but I much preferred the way race bikes handled and it was hard switching between the two.'

Rice raced from late 1979 until 1984 but a lack of funding forced him to retire from the sport the following year – an all-too-familiar story for racers in the '80s.

A carpenter by trade, Rice has also worked as a bike courier and a bike salesman and spent two years running a Triumph dealership in California. 'I also took up micro-lighting after I retired to try and replace the buzz of racing' he says. 'Once you've raced, you have to keep the adrenalin running somehow!'

Now semi-retired, Rice spends his summers in the UK and winters in Spain every year. 'I still ride road bikes but I don't have anything particularly exciting at the moment he says – just a 1981 Yamaha RD125 that fits nicely on the back of my motorhome! I'm going to sell that and get a Triumph Speed Triple later this year though.

'I was absolutely amazed when I was invited to do the Pro-Am race. There's so many people from back in the day that I really want to see again but had no idea how to get in touch with them all. You wouldn't believe how excited I am about it. It'll be the first time I've raced since 1984 and I've not done any track days either so I'm not going to make any predictions - we'll have to just see how it goes on the day.'