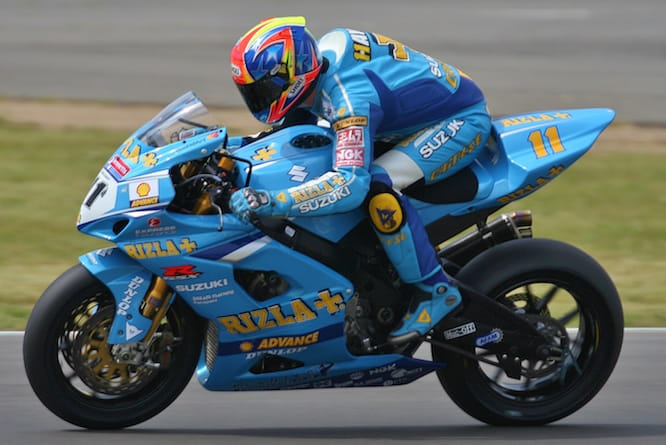 Now more familiar to TV viewers as a presenter on Eurosport's British and World Superbikes coverage, James Haydon was a top flight racer himself in the 1990s and 2000s. He was a race winner and championship contender in BSB - although he never quite managed to secure the title - and also had stints in 500cc Grands Prix and World Superbikes. Hayden retired in 2008 when a sponsorship deal let him down and he's concentrated on TV work since then.

He might be too young to have raced in the original Pro-Am Series (he was only eight when it started!), but Haydon actually owns a Yamaha RD350LC and RD500LC. 'I love my two-strokes so when I heard about this race I thought it sounded like great craic. I mean, racing a 250? Around the full circuit at Silverstone? As part of the British Grand Prix? What a laugh! I couldn't say no to that.

'I race a classic bike at Goodwood every year but when I came out of racing I had to put it at arm's length for a while and let some water pass under the bridge. But I now feel like I can do a bit again, just for fun. I love riding motorbikes, so why not?

'We're all going to be trying our best in the Pro-Am race, I don't care what anyone else tells you! As racers, you always try. I've never ridden an RD250 though so I'm guessing it's going to feel slow compared to my 350 and 500 and it'll have no brakes and skinny tyres but, at the end of the day, it's going to be great craic. And I love the idea of just picking keys out of a hat to get your bike allocated. That means no-one's going to have an unfair advantage. If we're all on the exact same bikes it's going to be all about how you ride them on the day so there's no excuses!'