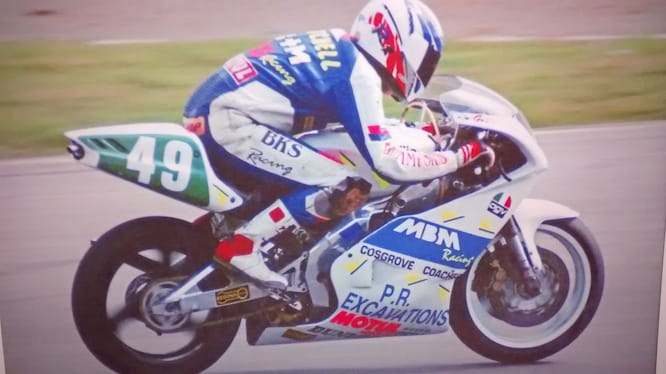 While Graeme Mitchell never actually raced in the original Yamaha Pro-Am series, he did race an ex-Pro-Am RD350LC with considerable success in club and national championships including the prestigious Marlboro Clubmans series.

He won practically every race he started in 1988, taking both 350cc and 500cc club championships home with him and the following year saw him finish second in the national 250cc championship. He also won the now defunct Indian Grand Prix - which was regularly held on an old airfield circuit in the 1980s – in the same year.

Mitchell was forced out of racing in 1992 after suffering a horrendous crash at Oulton Park that saw him break his coccyx, two vertebrae and both arms as well as suffering head and groin injuries. Two years later, he was back and finishing on the podium regularly in the British Supersport 400 championship but retired for good the following year after being let down by sponsors.

Mitchell is now workshop manager and overseas buying agent for the family business - Fastline Superbikes in Preston. 'I get to ride on the road all the time as there's always bikes around' Mitchell says 'but I've not done a track day for about four years now. We've got a Yamaha RD350LC in the shop at the moment so I'll need to take that out for a spin to get a bit of practice! I do a bit of motocross riding too so I keep my hand in. It was a real surprise when I was approached about riding in the Pro-Am race - it'll be a great bit of fun for everybody so we'll get stuck in and see what we can do. I'm up for it so I'm sure I'll go alright.'