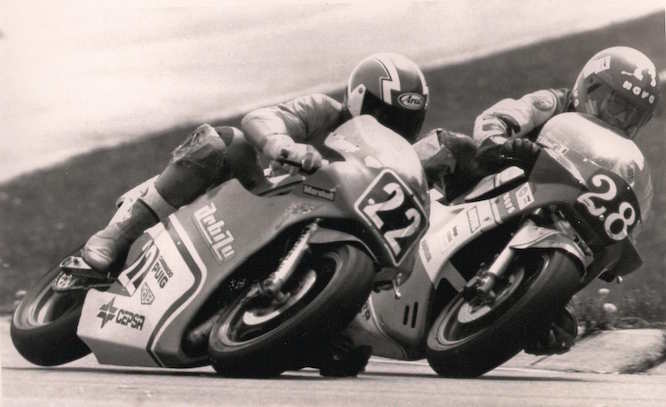 Geoff Fowler raced in the 1983 Yamaha Pro-Am Challenge with a best result of sixth place. By that time he was already a double Auto 66 Club 250cc champion and in 1984 he finished second in the British 250cc Championship. He raced at Daytona and rode for the British team in the 1987 Transatlantic Challenge races as well as enjoying stints in the European Championship and even in 250cc Grands Prix where he had a best finish of 15th at Mugello.

Fowler even got the chance to test a Suzuki RG500 at Snetterton alongside factory Suzuki GP star Kevin Schwantz and was only a few tenths off the American's best time but after crashing the bike out of the lead at the Neil Robinson Memorial meeting in Northern Ireland, the bike's owner decided against racing it again.

Fowler retired from racing in 1988 due to a lack of cash and the fact that his close friend, Kenny Irons, was killed in a tragic accident at Cadwell Park. After selling off his washing machine business in 2005, Fowler moved to America for several years but now splits his time between the UK and Spain. He's rarely ridden since 1988 but is pumped about the chance to race in Pro-Am again. 'I've not really ridden any race bikes over the last 25 years' Fowler says. 'I did a track day at Oulton Park on a Suzuki GSX-R600 and really enjoyed it but I was very rusty!  I cant wait to see all the guys form our old days of racing again. It's really going to be interesting to see how the lads go in the Pro-Am. Of course I'd love to win but I have to be realistic and understand that most of the guys on the grid have carried on riding bikes. I'm still going to go for it though!'