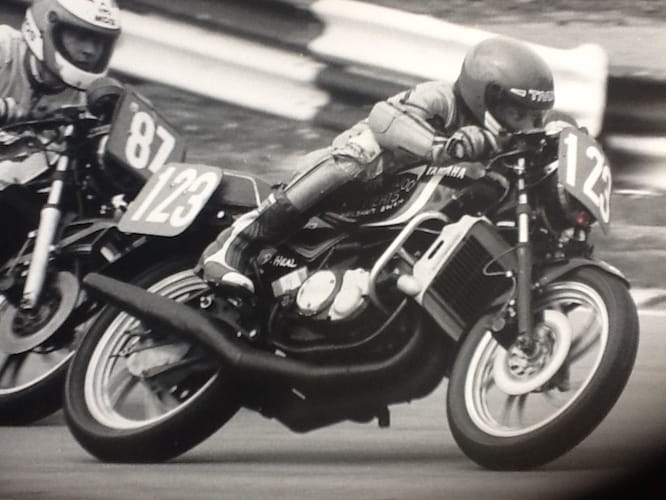 It was watching a Yamaha Pro-Am race that inspired Dave Heal to take up racing and it led to a hugely successful career that's still ongoing. Heal raced professionally for 20 years and was British Supersport champion in 1996 but he can't quite pack it in and still races in the odd classic event, Ducati Tri-Options cup race, and various other meetings.

‘I never raced in the original Pro-Am series but I did race in the RD350 Cup in 1985 and had a bad crash at Brands Hatch, breaking my tibia, fibula and pelvis. I've still got 20-odd pins and plates in me to this day. I was in hospital for six months but later enjoyed a lot of success on Yamaha RD350LCs, winning about six club racing championships on them.

'I later rode for Suzuki, Honda, Kawasaki and Yamaha in various championships, including British Superbikes, but I stopped racing professionally in 2001. I got bored within six months though so I started Supermoto racing and won 26 championships. I also ran my own team with 12 riders at one time so it was easily the biggest Supermoto team in the country. I started Christian Iddon off in the sport too. Then I went back to road racing in the KTM 660 Cup and ended up winning that from a young Gino Rea.

Heal used to own three bike dealerships but has since sold them and now owns various properties including two shops, a restaurant, and a nail bar. He's says it's a huge honour to have been invited onto the Pro-Am revival grid. ' I couldn't believe it when Niall Mackenzie told me about the race. It's an honour to be asked. I mean, Pro-Am is legendary amongst those of us who can remember that far back. It was the first televised race I ever saw and I just thought “Wow! This is crazy – I've got to have a go at this racing lark. And here I am, 30-odd years later, still doing it!'