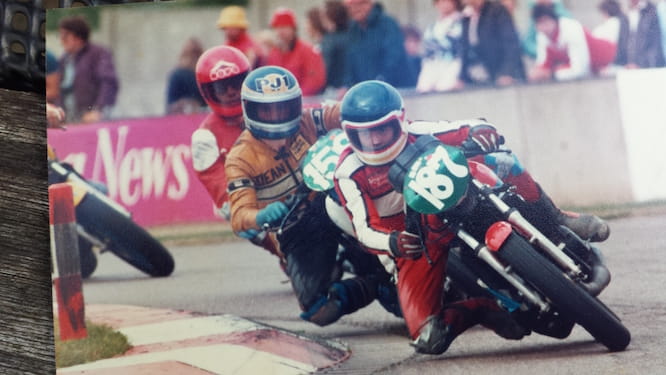 In 1986 Butler concentrated on the Open racing classes at national level on his TZ250 and enjoyed considerable success. In 1987 he won back-to-back races at the traditional Mallory Park Post-TT meeting and the following year he won the National 500 race at the Bill Ivy meeting at Cadwell Park.

'I have many great memories from that era' Butler says. 'But there were also many stays in hospital across the country to put screws and metal plates in various parts of my body!”

Butler retired in 1988 after struggling to secure competitive machinery but he still has a pretty exciting job – he crashes very expensive cars at MIRA (Motor Industry Research Association) for a living. 'It's quite stressful because with such expensive cars you have to get it right first time' he says. 'And the dummies that we use are full of instrumentation so they're worth half a million quid each!'

Although he doesn't ride on the road, Butler has fairly recent track experience having worked with the European Superbike School and Mick Boddice's track training school. 'I got to ride round Snetterton with Mick Doohan when he was a guest at the Superbike school so that's my claim to fame' Butler says.

Despite crashing cars for a living, Butler is very keen to avoid the same outcome in the Pro-Am race. 'None of us want to end up in A&E' he laughs. 'We've all been there too man times already. But as soon as the lights turn to green I'm sure it'll be all-out war, just like the old days.'