Life never slows down for the 23-time TT winner. He’s racing royalty, a living legend whose achievements put him right up there with the likes of Joey, Ago, Rossi and Hailwood. Yet for all his successes, John remains the most down-to-earth bloke you could ever meet.

Perhaps it’s John’s bloke-down-the-pub nature that makes him so appealing. He’s a man in demand from sponsors, with his Shoei helmet looking like a who’s who of the motorcycle industry. Where Hutchy is private and introverted and Guy retains an air of mystery, you get the feeling that there’s nothing left on the table with McGuinness. At 44-years-old he says what he thinks and doesn’t hold back. It’s clear that he remains as passionate about motorcycles today as he was when he bunked off school and sneaked on the Steam Packet ferry to go watch the TT back in the 1980s.

As we sit down for a chat during set-up for this year’s TT, during the lunch break at a pre-TT test at Castle Combe, there are no PRs sitting in to monitor the conversation, timeslots to be obeyed or party lines to be followed. As we hunker down in a quiet corner to chat TT 16, John’s got his phone out to share pics and videos from his recent trip to Japan. Here is a man whose passion for bikes remains unabated despite having spent 20 years on the circuit.

But he’s busy, very busy. He’s worked pretty much solidly for the past six months. This is one of a handful of day trips to the Wiltshire circuit, used by his tyre sponsor Dunlop to simulate the high speeds that are unique to the TT, and in between he’s made several trips to Japan with Mugen, had a few weeks repping for Dunlop in France and spent most of his weekends as a man in demand at various bike shows. Being John McGuinness is a full-time job.

But unlike other sports superstars, there are no cute PAs, limos or private jets. It’s John, his trusty Vauxhall Vivaro van and an Africa Twin that’s already earned its stripes on the M6. Occasionally he has to call on a mate to help out, but John’s a DIY kinda guy

“I haven’t stopped,” he says, sticking his phone on charge and grabbing a cuppa. “It’s good and keeps stimulating the head. I should show you my diary. I imagine that MotoGP riders are busy, but I do it all on my own. I need a hand at times and I get myself worked up. There are times when I’m double booked and double stressed! I don’t mind it but I half wish someone would do it for me!

“I was at the MCN show at Skegness one Saturday and Sunday. I rode there on Africa Twin on M62. It was freezing but we had good craic. I then rode to Heathrow, flew to Japan, tested and come home. Rode up the M6 on Friday night in the pissing rain. It was chaos, with cars everywhere. You need eyes in the back of your head for that. In the end, I had to stop at Hilton Park services ‘cos my feet were like blocks of ice. I had my fully vented road race boots on and I wear them really tight. Didn’t think about that…!

“From there we had that Seagrave award but I was testing at Le Mans before, so had to drive the van straight from there to London, then back over to France for the Dunlop RoadSmart III launch. Even this week (immediately prior to TT practice week) I’m here at Castle Combe today (Monday), I’m then driving home to Morecambe, picking up the motorhome and going over to the island on the overnight ferry. Spending Tuesday doing some bits and pieces on the island, flying back to Gloucester for another test here on Wednesday, then back home and another overnight ferry to bring the van and 11 bikes we’re displaying here at the TT. It’s crazy!” 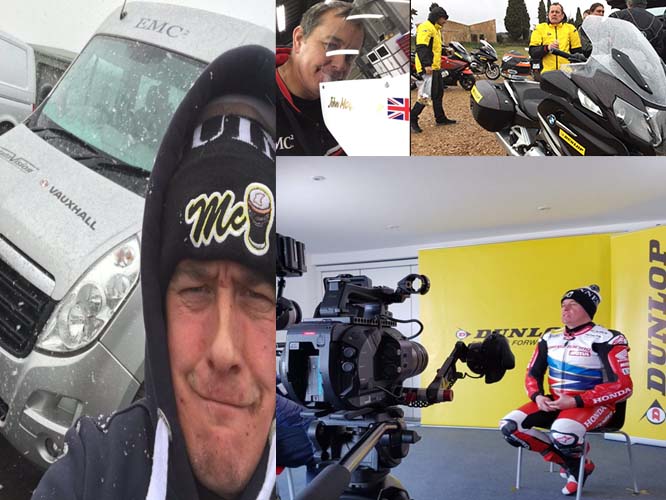 “When I put my helmet on I am totally dialled into what I am doing,” he adds. "This week I’ve been running around everywhere but the minute I flip the helmet on I am back into it. That’s where I feel happiest at, on the bike. There are a lot of things going on but the priority is always the TT and when push comes to shove the priority will always be that. Just now my head’s full of 'picking him up or doing that around the house', but when I head down Bray Hill there’s nothing else in my head. It’s 100% focussed on that.

“I feel as sharp and as fit and strong as I did last year. I can’t fix what’s not broken. It’s mega interesting this year. Hicky’s looking good and Hutchy has moved to BMW. Bruce riding the RCV is interesting too. It’s all poised with lots of great stories and I’m just the boring guy on the Honda who’s been there for 10 years!

“I’m scratching my head to think how we can make things better. We have little things like engine modifications. I’m still with Julian, my mechanic, who I trust with my life and it works really well between us. It’s a lot about consistency and just being happy. There are a lot of psychological things about the TT. While I’m busy going from this bike show to that bike show, Julian is working away on the bike in the background. He’s like an extension of my head really. He knows what I want and I don’t have to be on the phone chasing him. It just happens.”

McGuinness was the last man to stand atop the famous TT podium, his 23rd win coming in spectacular fashion in last year’s Senior. It was a victory that came after a week where he had been written off by many, and John says that provided, in part at least, the motivation needed to put in one of his most magical displays.

“I do need motivating at times,” he adds. “Sometimes I need a kick up the arse. Last year I finished seventh or eighth on the 600 but it wasn’t a bad seventh or eighth. I did 126 mph but the depth of field these days is amazing. If you did that a few years ago you would be spraying champagne.

“You can’t get downbeat. I finished fourth in the Superbike and had the worst (fuel) filler. I was stopped for over a minute and lost about 30 seconds. I wasn’t riding bad I just ended up having a bit of bad luck.

“You’ve got to have everything line up at the TT. If one thing is off then you just won’t win. We sorted that (the fuel filler) out and I chose a different tyre for the Senior. I had a rest on the Thursday, read a bit of crap on social media and that, heard a few whispers that I was finished – which I love – and that ignited me again. When I started winning TTs there was no social media, you did it ‘cos you wanted to do it. (Back then) there were other ways of going faster. There isn’t a bad bike out there these days, so you’ve got to find different ways to win and, in that case, it came from the heart. It came from a bit more brute determination and pushing harder." 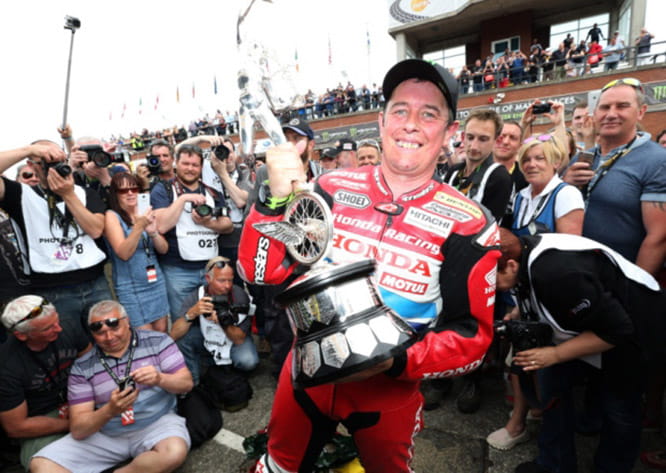 McGuinness says that he plans to ride for at least one more TT after this, when he will have Honda’s eagerly anticipated new Fireblade at his disposal.

“There is no real long term plan,” he adds. “There’s no plan as to when I am going to stop racing. I was out in Japan with Bruce (Anstey). He’s 47 years old and still as fast as anything, so there’s still a few years left in me. I still believe that this bike can win but I am excited about a new bike and that would keep me for another year. After that, we’ll see.”

And what about the record of 26 TT wins held by the great Joey Dunlop, the man John idolised as he sat in the hedgerows as a kid? “We are getting close,” John adds.  “When you are at 19 or 20 (wins) you think that it is out of reach but now we are only three away. That said, three TTs is still a big challenge. Even to win three TTs is fantastic for any racing career. That in itself is a big achievement.”

Realistically, John’s best shot at success comes in the two superbike races, as well as the TT Zero event he has bossed for the past two seasons. Despite this, he remains committed to supersport, where he competes for Jackson Racing, and running his own team for superstock, where he is contractually obliged to run the unfancied (in stock spec) Honda Fireblade.

“I just like being on the track, I like being on my bike. I’ve got 90-odd silver replicas and last year, in superstock, I won another silver replica. I finished eighth and I gave an honest race. I won a bit of prize money and a lot of people, a lot of my sponsors, were all happy to see their name on the bike.”

John’s superstock effort also typifies the DIY approach he takes to racing, and life in general.

“I was dipping my toe into running my own team and I really respect, even more so, the team managers and mechanics who order the parts and keep things organised because I am useless! You think that it’s only a superstock bike but you still need things like a spare chain. Mark Hanna runs the bike for me at the TT but the family and me did all of the organising. I even painted the bike myself. I’m proud of the superstock team and am looking forward to racing it again this year. I’ll be trying hard and will look to get another honest result. With a bit of luck we might be able to get into the top five.”

And with that, John has to go. He’s got an afternoon of testing to get through and the rain is closing in. After that he’s rushing back home to personally load up and drive over 11 bikes he’s taking over to display at the Isle of Man this week.