How do racers recover from injury? 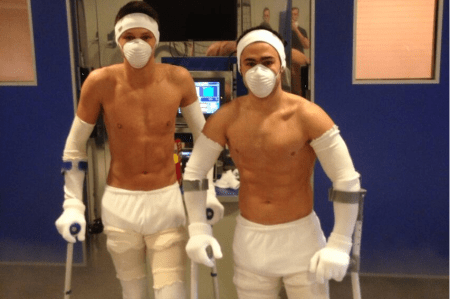 The nature of sport means that injuries are all too common, from athletics to football to motorcycle racing, injuries have a massive impact on the professional sportsman as they can impact that all important level of performance. During the last ten years or so a number of new treatments have emerged with the aim of speeding up the recovery process. As anybody who follows motorcycle sport closely will know, motorcycle racers will do quite possibly anything to be able to return to the circuit sooner rather than later.

A common treatment among injured racers is use of a hyperbaric chamber. This involves sitting in a pressurised chamber containing 100% oxygen. Air we breathe normally is made up of around 21% oxygen. Breathing in pure oxygen combined with the high pressures in the chamber increases the amount of oxygen that dissolves into the bloodstream. This allows tissue cells inside muscles and bones to reproduce much more efficiently, consequently speeding up the healing process.

Dan Linfoot broke his pelvis at the first round of this year’s British Superbike Championship back in April. This weekend, just over three months after the injury, Linfoot returned to BSB at Knockhill and achieved a top ten finish. After spending ten days in hospital following the crash, the former World Supersport rider started training immediately upon returning home to ensure a speedy return to racing.

“I used the hyperbaric chamber on the Isle of Man” explained Linfoot. “The time there was important. It’s obviously difficult to tell how much it speeds up recovery because you would never know how much you’d recover in that period of time anyway, but the gains in movement and pain threshold were vast over the seven days I spent there. It’s no miracle cure but it does speed up the process”.

Honda World Superbike rider, Leon Haslam has also been spending time in the hyperbaric chamber after breaking his leg at Assen in April. Leon had hoped he would be fit to ride at Donington Park just a month later and although he was declared fit to ride by circuit medical staff, he pulled out after qualifying due to the pain. Two weeks later at Portimao, Haslam retired from the first race and opted not to start the second.

“I knew I wasn’t likely to be competitive because I couldn’t bend my knee so I was having to use my arms more which wasn’t eas,y but I was keen to reach the target I’d set myself” said Haslam. “Throughout the session the pain was getting worse, the break itself was flexing and the bolts holding it all together were chafing, this meant I was about a second from where I would normally like to be.”

Haslam used a number of treatments to attempt to speed up his recovery, “Once the swelling had reduced enough I was able to begin treatment to try and speed up the healing” explained the Derbyshire rider. “This included hyperbaric treatment three times a week along with cyrotherapy and magnetic therapy three times a week. This along with gym work everyday and a trip to the FA’s new training centre, St Georges Park, for hydrotherapy treatment in pools of 8 to 10 degrees.”

Linfoot’s point about the hyperbaric chamber not being a miracle cure is an important one, as Haslam demonstrates; some injuries need a long period of time to recover even with use of the chamber and can’t be fast-tracked within your preferred time span. Double World Superbike champion James Toseland tried hyperbaric treatment for the wrist injury he suffered following a fall while testing in March 2011. Toseland spent the next few months doing everything he could to return to racing; in August he was passed fit for the Silverstone round but struggled to finish both races. At the next round in Germany, Toseland crashed out and subsequently returned to his consultant who confirmed the wrist would never fully recover.

“I don’t have enough range of movement in my wrist to race professionally and no amount of physiotherapy is going to improve that. This all led to the verdict was that it’s no longer safe for me to continue a career in motorcycle racing” Toseland wrote in a letter to his fans announcing his retirement in 2011.

“I’ve tried everything possible for the last few months but the sad truth is that none of it has worked and my wrist will never fully heal enough for me to operate the throttle properly and navigate right hand turns”.

Developments in technology have meant that racing is possibly safer than it has ever been, although when you’re racing motorcycles at speeds of 200mph, danger is inevitable. Injuries happen and it is fortunate that a lot of the time there’s treatment available to ensure the rider can return as soon as possible. Although when they do return, it’s often the case that they are still injured and are perhaps even playing their injury down as they are determined to get back out on track. This makes it hard to judge how effective treatments such as the hyperbaric chamber are, but as long as riders are saying it has helped speed up their recovery, more riders will try it. Sometimes, like in the case of James Toseland, no amount of treatment will enable you to recover to the level of fitness you need to be able to race successfully; fortunately these situations are quite rare.