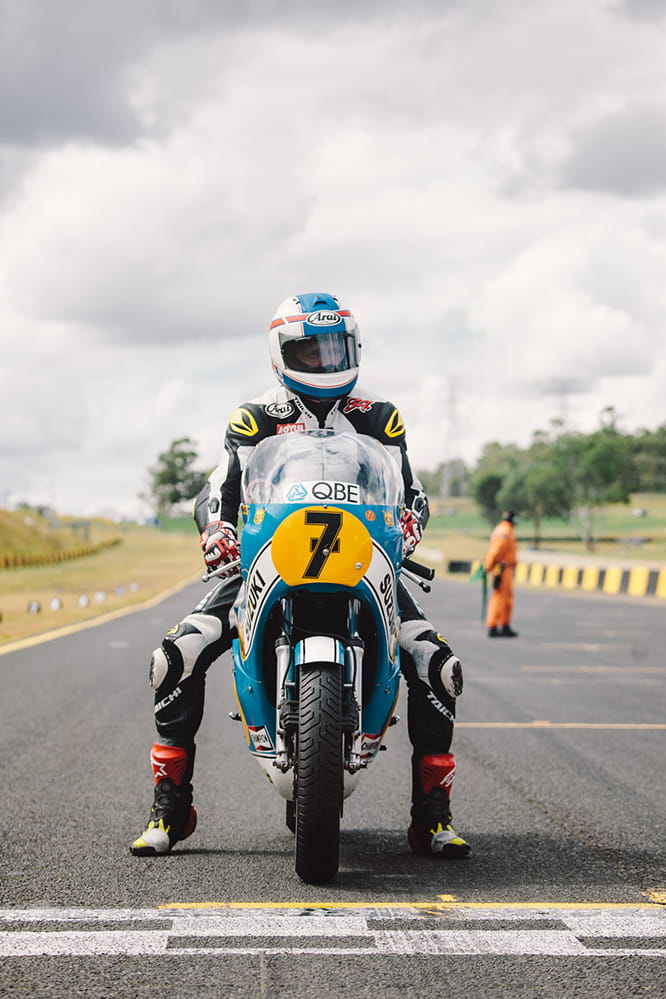 It’s been 13 years since Barry Sheene passed away and this was certainly the biggest and best BSFOS to date with nearly 300 riders on 500+ machines racing in the popular Cockneys memory.

This years meeting was a bit special and so much more than legend riders riding legend bikes.

There was more depth than ever; the organizers creating a fusion of classic motorcycle ingredients that made bike fans salivate while celebrating the 40th anniversary of Barry's first GP title.

A certain intimacy was obvious from flowing access to the garages, pits and bikes combined with approachable GP & TT Legends who happily gave their time for the punters, racers and journos. 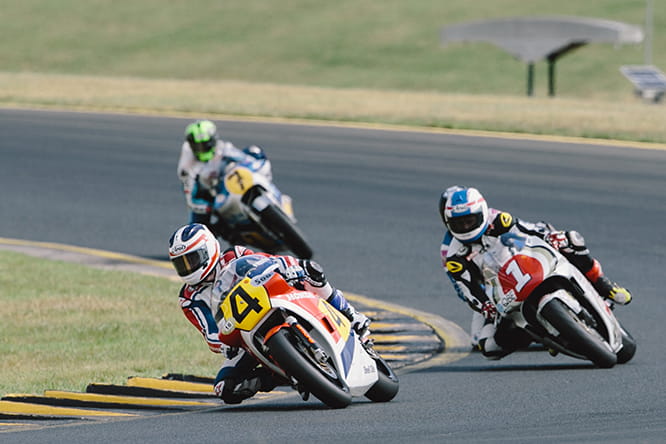 As well as the GP & TT Legends there was a lot of good international and national riders plus the plethora of club racers that make up most of the entries.

The diversity and quality of racing bikes in the pits was spectacular and likely received more attention than the actual racing.

The show and shine was very popular too as was the well-subscribed spectator’s parade laps.

The crowd was up significantly from an estimated 2500 last year to over 7000 for the weekend helping create the great atmosphere.

Noticeably, the punters where not just grey beards, but a refreshing mix of generations, all sharing a common love of motorcycles.

Weather is always a factor with 2 wheels and the rain mostly stayed away helping everyone. 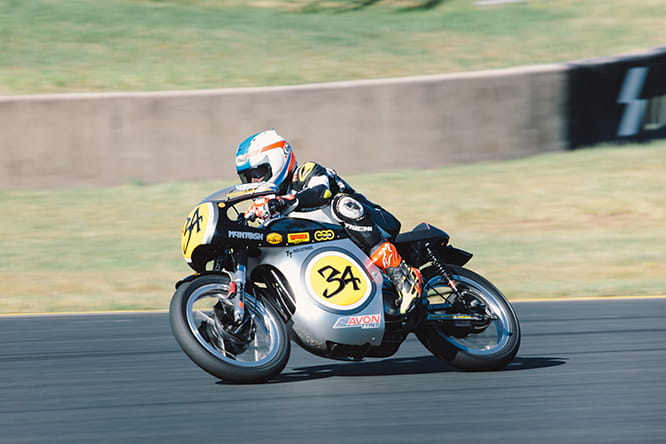 A big difference from previous years was the 2016 BSFOS pre-event build up.

The organizing PCRA club, a bunch of hard working and enthusiastic racers, did a very smart thing and hired the crew from the Distinguished Gentleman’s Ride (DGR) to market the event and what a difference that made.

The DGR guy’s extra curricular activities of a film-night, race-bike displays and GP & TT Legends ride through the streets of Sydney all added to a great build up.

Plus there was Q&A with GP & TT Legends on Friday night in the circuit’s garage cafe and GP & TT Legends dinner on Saturday evening with Stavros spinning some great tales and another Q&A.

The BSFOS has always been the Island Classic’s wee brother, but not in 2016. 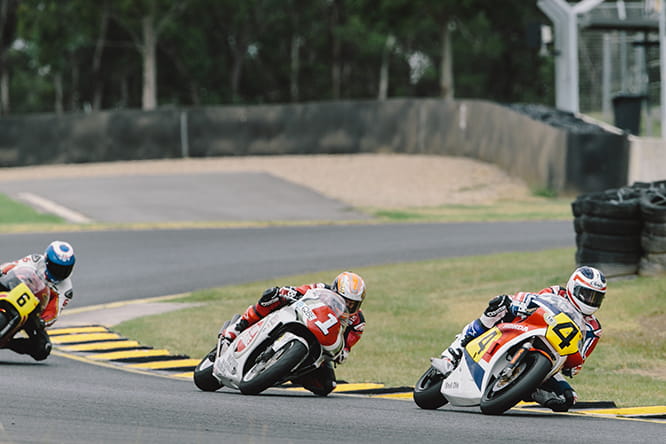 The organizers pulled together an amazing group of riders including: 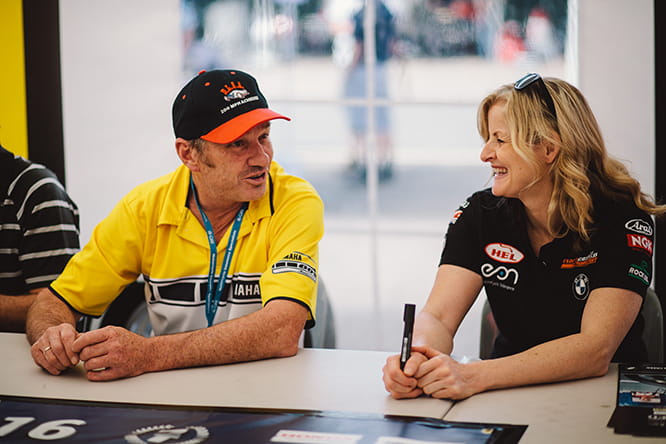 Thanks to the generosity of race bike collectors like Steve Wheatman, Paul Galles Gary Middleton and Tom Dermody, the 2016 BSFOS enjoyed an impressive collection of rare and beautifully maintained classic racing machinery used as intended as they where ridden with spirit on the race track.

Honda RS500R - Freddie Spencer rode this beautiful machine brought by all the way from Europe. 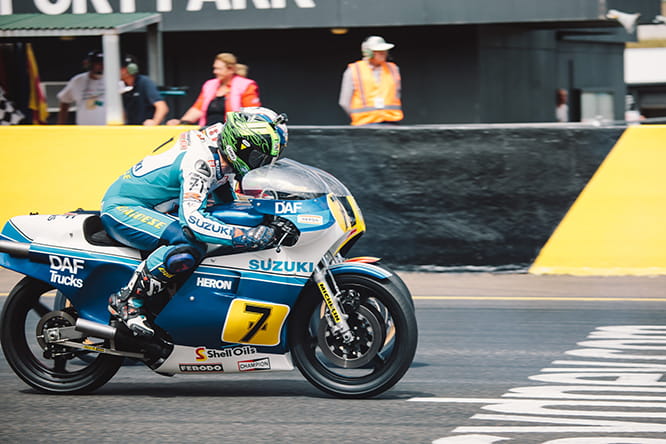 The GP & TT Legends didn’t disappoint, showing great self-control to balance the necessary mechanical sympathy on these beautiful but fragile machines versus putting on a great show with the GP machines on full song.

Schwantz was a stand out not only taking part in the GP & TT Legends clash but in plenty of other classes against local racers and ending up with a Barry Sheene memorial trophy as his reward.

It was also very cool to see Barry’s son Freddie riding with the GP & TT Legends.

360 degree video on board with Kevin Schwantz:

It’s easy to forget that legend riders are not just the aliens of their time but also actual human beings and this was very evident as plenty of emotion surfaced over the weekend, not only for Barry Sheene but for other riders gone too early.

Kevin Schwantz spoke about how easy it was to get emotional with Wayne’s and Barry’s bikes here.

Stavros felt deja vu looking around to see the number 7 bike behind him on track with Barrys protege Chris Vermeulen on board.

Freddie Spencer talked about his special bond with Barry that grew after a hug from the famous number 7 when the 18 year old American won the Trans Atlantic match races back in 1980. 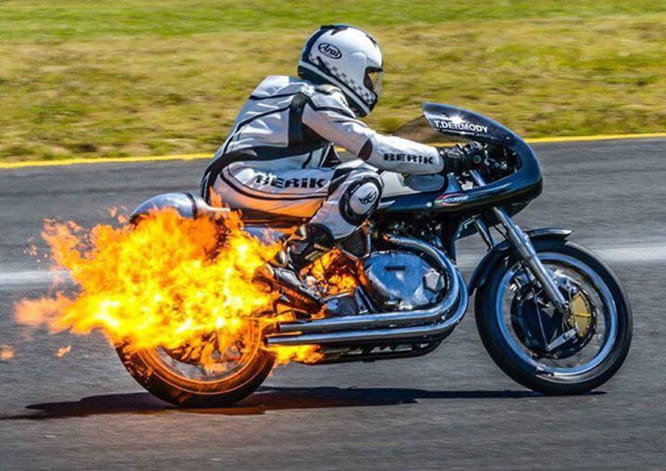 As you would expect when you put old blokes and old bikes together on a race track, there was the inevitable crashes, oil leaks, blow ups, fires, start line clashes, hairy tail ender overtakes and a few bugs, but the organizers really did a great job to keep everything moving along well.

Check out all the results at http://racing.natsoft.com.au/results/#2 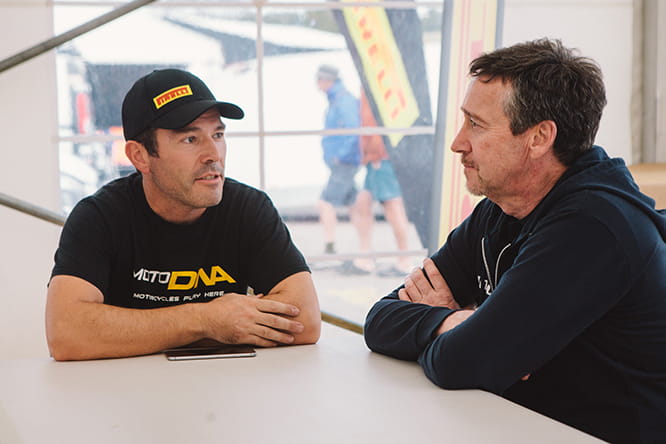 They say you should never meet your hero’s, however I had no dramas with 3 times World Champ Freddie Spencer. Not only can he ride a bike, but he is also a very funny and humble guy.

Living in London these days, Freddie is still extremely passionate about motorcycles and gave us some great insights in this interview.

What does the Barry Sheen festival of Speed mean to you?

“These events are very important for many reasons. Passion for motorcycling is very local and it’s important to support it at the local grass roots level.

An event like this really represents the heritage of the sport. Its not just about the older generation, you feel all the different generations.

You look around and there are families and people that are so appreciative. For me, when people walk up to me and say; thanks for coming, I say it’s my privilege.

I’ve been riding for 50 years (Freddie is 54 years old) and experienced motorcycles from every level possible.

It is a passion and I’ve gone full circle in many ways.

I rode 4 hours a day, 5 days a week and my Brother and my Dad who both raced local stuff.

They put me out on an intermission when I was 4 years old and that how I got started.

Certainly your environment influences you but over time my appreciation for the fans has grown and I have felt this way since I was a kid.

To wrap it up, for me its the look on peoples faces from the appreciation of the time I spend.” 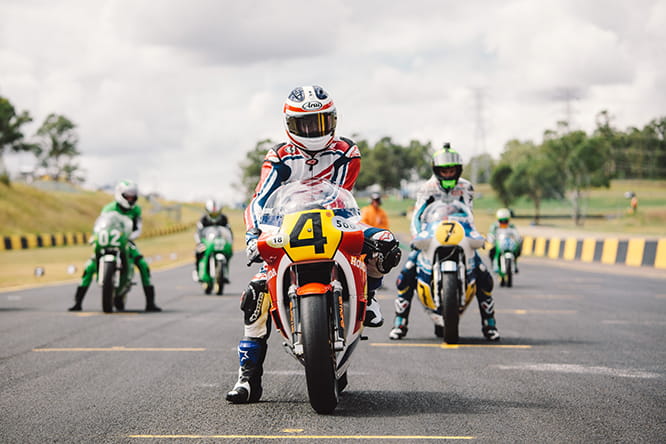 “My very first event outside the US was the Trans Atlantic match races in Easter 1980.

I was 18 years old and showed up at Brands Hatch on Good Friday. We had a 20-minute practice session on Thursday afternoon and then 2 races on the first day.

I won that first race, Barry was 2nd and Kenny Roberts was 3rd .

On the podium there was silence and afterwards Barry came up and put his arm around me and said really great job.

That was the type of person Barry really was, he was competitive and everything else but he truly was sincere, he was a kind human being.

That was the start of a great bond between us all the way to Imola in Sept 1983 when I crossed the finish line to win the world championship.”

Freddies Favorite Part of the BSFOS:

“There are two things Mark.

Riding the 500, that 83 bike that was the machine that Gustav Reiner raced in the 83 championships.  I’m so appreciative to Paul Gallas for bringing this bike over, and the fans, a lot of people never seen 500s run at speed.” 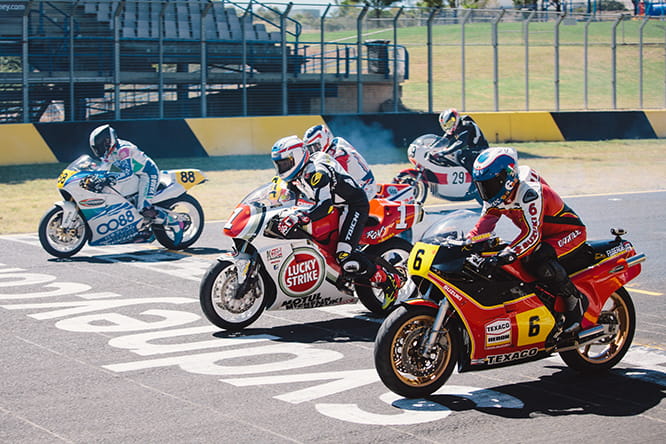 It’s well known Steve Parrish was Barry Sheene’s good mate and so it was especially significant to get the modest larrikins thoughts on the BSFOS.

I came with a completely open mind, never been to eastern creek, bit nervous really because I was coming to a track that I had never ridden. The first day I only did 2 laps before bike broke, then another 2 next day before something else happened.

Eventually though I got to love it, I really enjoyed the circuit.

Cleary I have a strong and close association with Barry and it just seemed very fitting to come out here and I was really pleased to get the invitation.

Then I hooked up with Stu Avant who I used to race with who got a bike and painted it in my colors with number 6 on it and he’s done exactly that, its been superb working with him.

Just so many faces I bumped into Jeff Sayle, Murray Sayle, Korky Ballington, Crosby is here, Freddie Spencer, Kevin Schwantz it just goes on and on.

I think the organizers have done a great job, great balance of people. The only disappointment I have is that I couldn’t get on the pit wall and listen as we went past. It’s been a real treat just hanging out with the guys and bombing around the circuit.”

What would Barry think if he saw this event in his name?

“Well he would have been involved in it and he would probably be going faster than me again, one of my best memories will be looking around and seeing the number 7 behind me with Chris Vermeulen on it, it was very Deja vu. Nothing in Europe comes close from a Barry Sheene perspective.

Its been wonderful, listening to these 2 strokes bombing around and always working on them like we used to have to do, cylinders coming off and pistons going in.  They have got a great atmosphere here looks like its very popular, all the other racers clearly enjoy riding and hanging with all the famous people.

Its been an absolute treat, my bike has run like clockwork in the end, in fact its run better than I have I think.

It will be great to finish off by going up to see Stephanie Sheene for 5 days on the Gold Coast.”

Check out the Barry Sheen Festival of Speed Facebook page for more videos and photos at www.facebook.com/bsfos 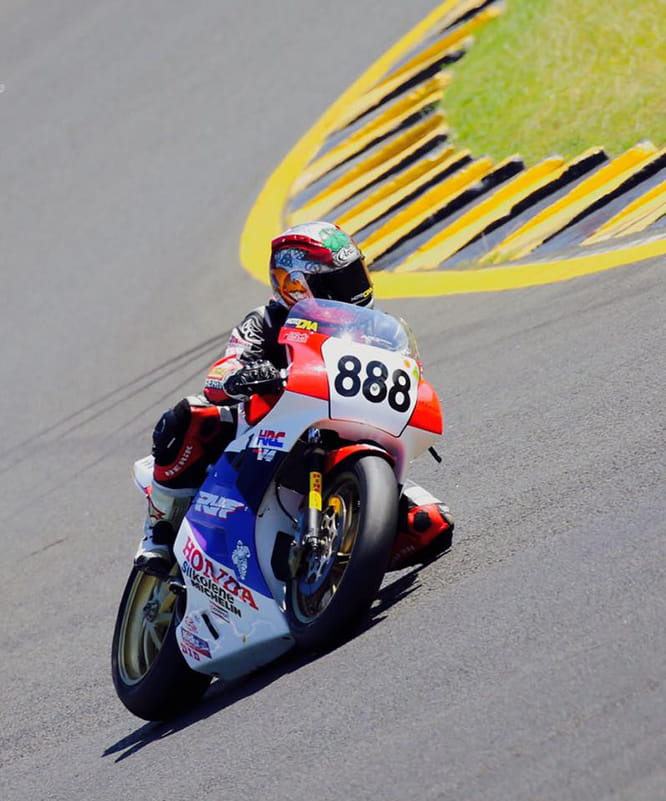