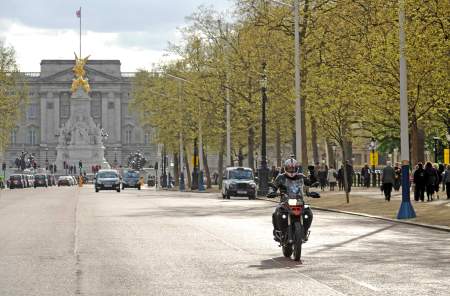 Ever noticed the motorbikes used during the London Marathon? Well, there are plenty circulating the course transporting rear-facing camera-men, timing boards, security chaps, escorting the leaders and avoiding tripping over the elite athletes. And it’s BMW who loan the bikes to the Virgin Money London Marathon organisers – 15 of them to be precise with six different models involved; GS1200 & Adventure, F800GT, F800GS Adventure, R1200RT and the 90th anniversary edition of the RT.

Each is modified according to its use. For example, the RT escort bikes are fitted with chequerboard graphics and pilot lights.

The race itself is set to be super-competitive with Double Olympic and World Champion runner, Mo Farah, making his debut.  He’s aiming to break the 29-year old British record for the London Marathon which currently stands at 2h 07m 13s. Meanwhile, whilst preparations were underway as the capital prepares to its 34th annual race, I arrived on the start-line five days early…not in lycra but on board an F800GS Adventure. 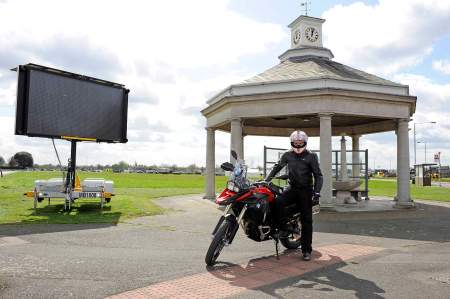 I’d borrowed the bike from BMW’s Guilford dealership, Vine’s, to see how it would compare to the time set by the elite guys and gals on the marathon route albeit with London traffic to contend with. There are parts of the course that I couldn’t replicate exactly because of the one-way streets and pedestrian areas such as Cutty Sark and Parliament Square.

Farah & co. will be using leg power alone around the 26.2 mile run in the capital on Sunday.  Meanwhile, I was on board the £10,535, 85bhp, 798cc, liquid-cooled, parallel twin Beemer. The average speed of a marathon runner is 12.43 mph whilst, according to the AA, a motorcycle’s average speed in London traffic is almost identical at just 12.5mph, so man v. machine should make for an interesting experiment.

I start in the heart of Greenwich Park at the Red start where 36,000 runners will line-up on Sunday, the course merges with the elite men, elite women and wheelchair course at around 2 ½ miles on the A205 South Circular. 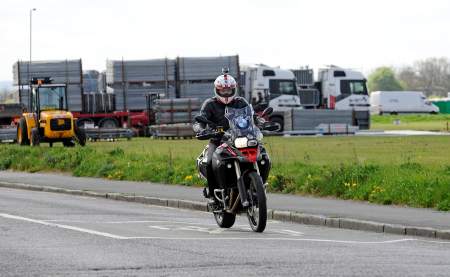 The F800GS Adventure is tall which is ideal for London traffic allowing you to see over cars with ease. Its height also allows you to be seen, yes ok from an intimidating other road-users perspective but also from a safety angle because the headlight (and fog lights if you really want to annoy taxi drivers) are at the ideal height to be detected by vehicles in front. The bike is punchy low-down so accelerating away from pesky delivery chaps on with their L-plated mopeds at every set of lights is easy although the short gears means you’ll be seeing 1-2-3 followed by 3-2-1 on the dash more times than you’ll care to remember during a city-based journey.  Thankfully the clutch is light and the gearbox is very easy, the lightest touch of the clutch lever allows you to nick the next gear and neutral is always easy even on the extremely low-miler I’m riding.

The first 6 miles or so are a simple anti-clockwise route around Charlton which sees you back past the University of Greenwich and looping around The Cutty Sark but, as I mentioned, I couldn’t use the pavement around the landmark. Mr Farah will be aiming to be here within 31 minutes with the 3h30m runners just under an hour. It’s taken me 25 minutes: I lead.

I got as close as possible to the clippers ship for our photographer to snap the obligatory pose before heading off parallel to the river towards Surrey Quays at mile 9, just over 1/3 race distance. Traffic is busy through Deptford but the BMW is narrow enough without any panniers to cope with filtering, especially when following a trusty CBF600-mounted courier, surely the quickest bike in London, right?! 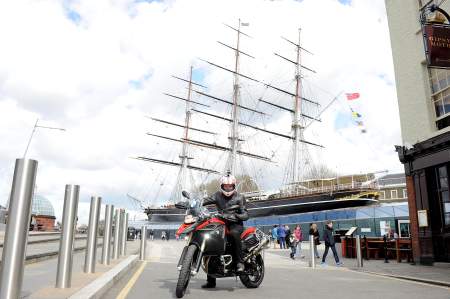 Tower Bridge is the next recognisable landmark and coincidentally Farah himself is on the quayside taking part in a photocall as I cross over. He’ll be back here in full race mode at approx. 11am, 1 hour in on Sunday if you want to see him, I’m now 10 minutes ahead at this point. The BMW marches on with ease, no need for the two-stage heated grips during the London sunshine today nor do I need to switch from Road mode to Enduro mode to optimise suspension response on loose surfaces, this isn’t available on the stock version of the F800GS by the way.  The enormous 24-litre fuel tank should see a range of 250 miles according to BMW – not in London – however, the digital fuel gauge is so under-used they only put the bottom half of it on the display! 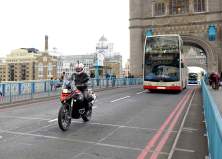 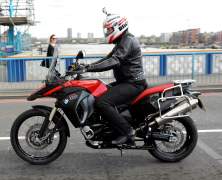 Mo & co. can nip right at the lights after the Bridge but I have to do a quick extra loop before re-joining the course heading along The Highway, past Limehouse and towards a lap of the picturesque Isle of Dogs from mile 15 to 18.

The BMW gets looks and nods of appreciation from the Canada Square workers, lunchers and tourists as I thread my way through the high-rise office buildings with just 7 miles remaining. This bike is much more manageable around the city streets and resulting traffic than its 1200cc older brother, the steering is light despite the 21inch front wheel and at this stage I’m really enjoying being able to flick the bike around the Canary Wharf streets which resemble a go-kart track in places. (Mo: 1h34m, Me: 1h24m). 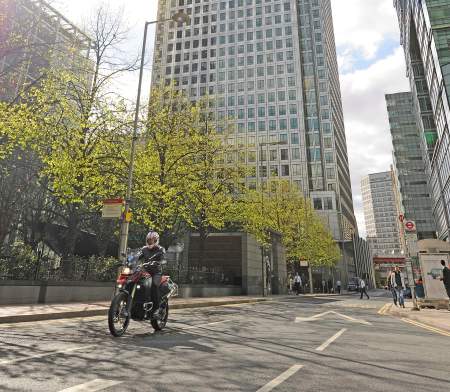 We’re on the homeward stretch now, following the river towards the more recognisable attractions of Tower of London (Enduro mode could have been used overt the cobbled streets if it were legal for me to ride down there), St. Paul’s Cathedral and the London Eye. Traffic’s heavier now, red lights are against me and Mo’s hypothetically breathing down my neck as we hang-a-right at Big Ben and into Parliament Square.  I have to take the long way around the Square before heading down Birdcage Walk. 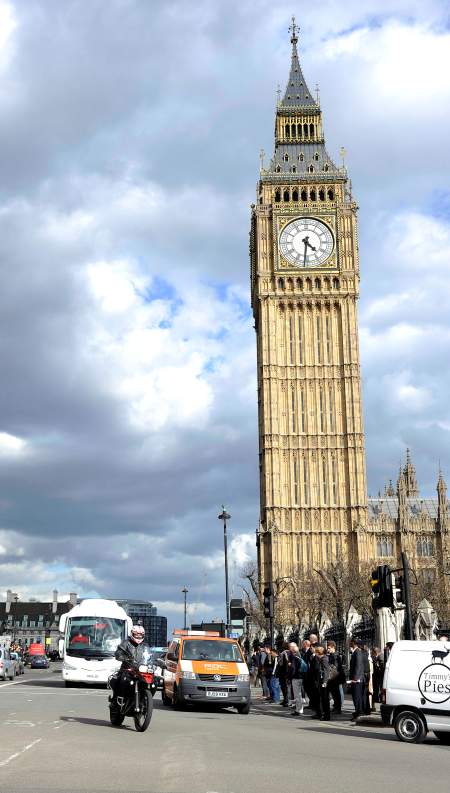 The final right turn is in front of Buckingham Palace and again the traffic is against me. I get to the front of the final set of the traffic lights and as they turn green I accelerate hard (up to the legal limit of course) and across the finish line…you’ll have to watch the video to find out how close the BMW and I were to the current British record.

For those travelling around to see family, friends or colleagues running/jogging/walking the marathon on Sunday you should seriously consider using a PTW as the optimum form of transport to see as many parts of the course as possible. And if you can get your hands on an F800GS Adventure, you won’t be disappointed. 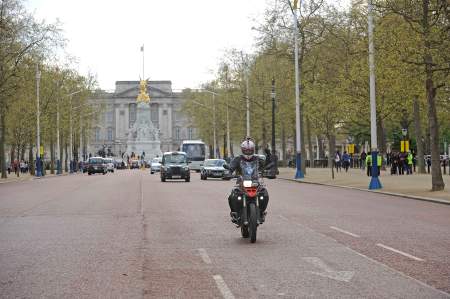 Here’s our top five places to watch the marathon from:

For an interactive map of the route, click here for the official Virgin Money London Marathon website.