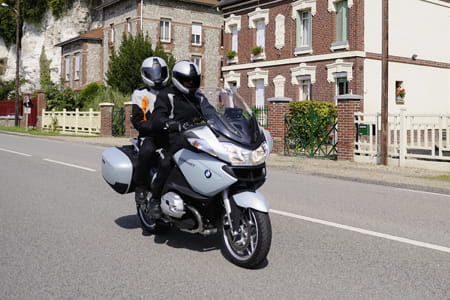 Given that the BMW R 1200 RT has one of the oldest engine designs and layouts in existence (it’s heritage can be traced back to 1923), the air/oil-cooled flat-twin engine is perfectly suited to the task of transporting bike, rider, pillion and luggage across continents.

Considering the overall weight of the R 1200 RT without baggage, the engine is adept at pulling top gear from 3000rpm and makes light work of mountain gradients. It really is a case of selecting one gear and sticking to it. This allows the rider to concentrate on the road ahead.

Light vibration at the top end of the rev scale adds character to the engine and also serves as a warning when to change gear and drop the revs into another dollop of engine torque – why rev-out when you can surge forward in a fuss-free way?

While the Telelever (central single front spring strut) front suspension is brilliant at taking out any unwanted dive on the brakes, it reduces the feel for what the front end is doing. It’s particularly worse on the RT because of the additional weight from the full touring dress it proudly wears. But if you’ve got faith in the tyres the RT can still cut a fine dash – have you seen what traffic officers can do with a kitted police version of the RT? Unbelievable…

Until the advent of the new six-cylinder K 1600 GT models, the R 1200 RT was the best touring machine on the road according to BMW aficionados. Ride one for a week and it’s a good chance you’ll agree – non-aficionados too.

It’s bloody comfortable in the saddle. Bar, footpegs and switchgear are in the perfect position to relax for the next 900 miles. Helping out on the comfort front is the electronically adjustable fairing screen that can be deftly adjusted by switch to give a bluster-free ride. 968 miles in one day is not a problem to the R 1200 RT – nor is it to the rider. Been there, done it and walked away without an ache.

Get BMW Motorcycle insurance at Bennetts