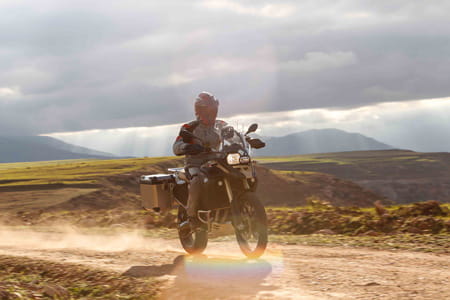 There is no denying Adventure bikes are the current hot trend in the motorcycle market.

Having created the class with its legendary GS back in 1980, BMW now has stiff competition from the likes of the Triumph Explorer, KTM Adventure, Yamaha Super Tenere etc, all of which claim to be able to transport you to the furthest far flung corner of the world. While this is all very well and good, the simple fact of the matter is that few riders feel the urge to venture off-road on these machines as their sheer weight is a serious barrier to over come.

First launched in 2008, the parallel twin F 800 GS is a great solution for those wanting a bike that is manageable in both an on and off-road situation. For 2013 BMW have increased the baby GS’s potential even further by creating an Adventure variant.

Like other BMW Adventure models the F 800 GS Adventure uses the F 800 GS as a base to build upon. The frame, engine and suspension (bar settings) are all identical however the 16-litre tank (located under the seat) is increased in capacity by 50% to 24-litres, engine bars and pannier racks are fitted as standard alongside a taller screen, wider seat and enduro footrests. As with all BMWs, ABS is factory fitment however should you also request the optional ASC (traction control) the Adventure comes with an ‘Enduro’ mode that the stock GS isn’t offered with. 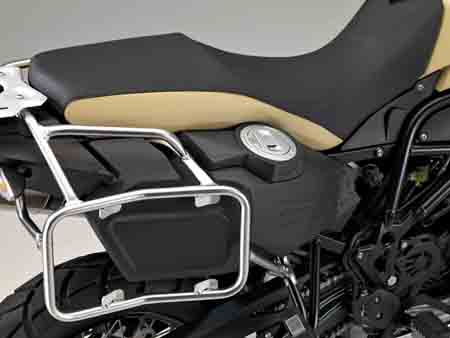 Despite the increase in weight on the rear due to the extra fuel, the GS’s handling doesn’t feel like it has been affected at all by the larger tank. On the road the BMW retains the maneuverability of the stock machine while its comfort levels are vastly improved thanks to the addition of the new seat and screen. BMW claim the 24-litre tank should be good to squeeze over 250 miles between fill-ups, something you should be able to test as the seat is deeply padded and the taller screen very effective at deflecting wind blast.

Venturing onto some off-road and selecting ‘Enduro’ mode the front ABS seemed to activate very quickly, which will be reassuring for off-road novices, however I would like to have seen the rear less responsive. You can’t skid the back wheel at all due to the ABS and maybe an option of ABS on the front only would have been better. You can turn it off all together, but as a nervous off-roader I like the safety net of ABS. In ‘Enduro’ mode the ASC is slightly less intrusive than ‘road’ mode, allowing the rear to slide slightly so you can hang it out with a degree of safety.

As a first taste of adventure bike riding, or simply for riders who think the R 1200 GS is a bit cumbersome for them, the F 800 GS Adventure is a brilliant option. A genuinely capable off-roader (with proper tyres fitted) the GS is also an excellent commuter and good looking and rugged motorcycle. While the bigger 1200 is certainly a better two-up long distance tourer, the 800 is easy going thanks to its smooth parallel twin engine and is far more likely to open off-road doors to less experienced adventurers than its bigger brother. 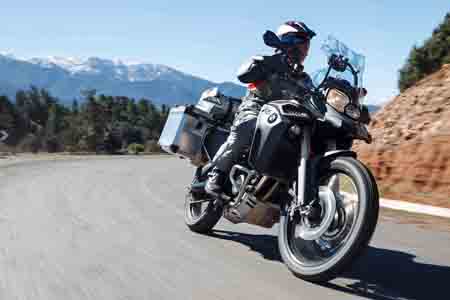 The GS comes in a variety of guises for the UK market. The base Adventure is £9,650 with an ‘Adventure Travel’ costing £10,535 and coming with ASC, heated grips, LED auxiliary lights, center stand and the BMW on-board computer. This represents a saving of £665 if you bought the items separately and spec-ed up the stock bike. A special ‘Launch pack’ is also being offered that costs an extra £1,637.63 and includes aluminium panniers, a top case and the new Adventure GPS. If you order this before 30 June 2013 you get an extra 20% off, reducing its price to £1,310.10.