Yamaha's Pro-Am 250LC race is back! Full inside story, plus, we ride one! 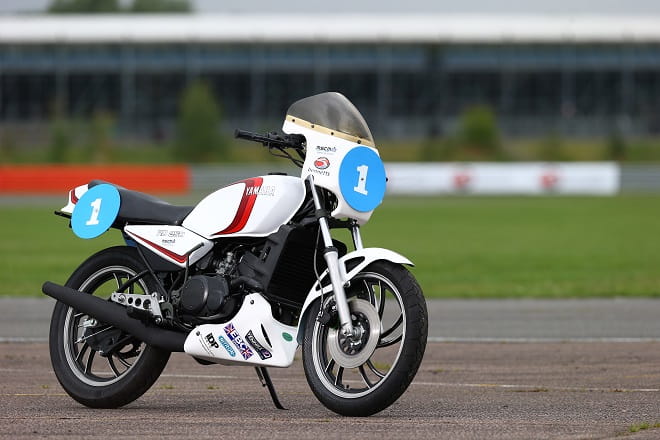 Yamaha’s historic Pro-Am race is back and running at the British MotoGP at Silverstone this year with 24 Yamaha RD250LCs and 24 old blokes with a score to settle from the eighties. We spoke to the guys who are recreating the project, and got a spin on one of the first restored Pro-Am LCs.

Restoring a rusty heap of Yamaha RD250LC dragged from the deepest depths of Europe and getting it running in just eight weeks is no mean feat.

Restoring 30 (yes, 30 Yamaha RD250LCs) in just eight weeks and getting them on the grid for the main support race at this year's British MotoGP is completely heroic. Or plain mad.

But that’s exactly what Daryl Young and his team at IDP Moto have tasked themselves with as they prepare the 30 bikes that will run in the Bennetts Yamaha RD250LC Pro-Am race at the British MotoGP in August.

Less than seven and half weeks away from now 24 restored LCs will be lined up on a race grid at Silverstone in front of the MotoGP crowd. The other six are being built as spares.

If you’re not familiar with Pro-Am, allow me to give you a brief history lesson. 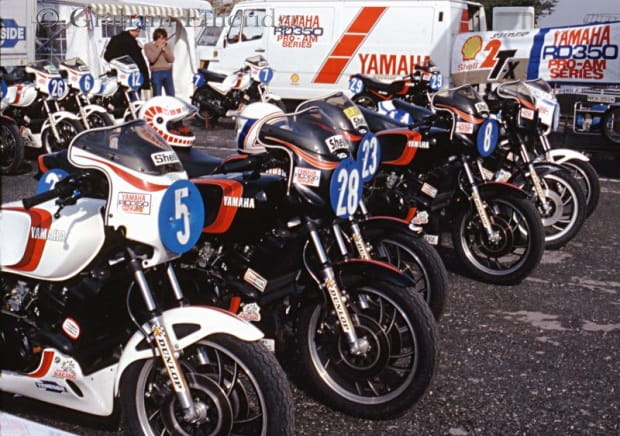 The race will be re-run with backing from Bennetts at the British MotoGP this year as the main support race. It will also be run at Sachsenring MotoGP and at Donington World Superbikes next year too if the plan comes off, and most of the 24 rider grid have already signed-up for the challenge.

From professional ex-racers like Niall Mackenzie who started with Pro-Am and went on to be a Grand Prix superstar to Alex Bedford who’s now a vicar in Scotland, every one of the original cast members were asked to be part of the new classic race. One man, Charlie Corner, is so serious about it that he has already bought a bike and has been out testing. These old guys don't mess about when iy comes to racing, that's for sure. Other names rumoured to be on the grid include former 250 British champ Nigel Bosworth, Marlboro Clubman star and former Lucky Strike Suzuki GP rider Terry Rymer, and GP winner Jeremy McWilliams as a special guest.

Like all the best ideas, the conversation to bring the Pro-Am series back happened over a pint between MotoGP rights holder and Circuit of Wales top brass (and British MotoGP organiser) Chris Herring, and IDP Moto’s Daryll Young.

Herring said: “We wanted something fun that would deliver a new experience for the fans and change the regular GP schedule. We’re also bringing the Silverstone Wing to life with a huge classic village, a massive display of historic bikes, the 250 Production race, and a Jazz band. It all brings a new element to the GP and everyone we have spoke to about riding again is well up for it.”

A web search across Europe took place and resulted in the team buying up as many RD250LCs as they could find in a matter of weeks.

The announcement of the series had to be kept quiet so that prices of the bikes were not artificially raised. Though LC forums were a buzz suggesting that a crazy millionaire was trying to buy every LC in Europe. They weren’t far wrong.

An LC fan called Mark Lowther who runs a deep sea drilling firm called MSCM is the main backer of the project. He's having a matching numbers 350LC restored for himself to keep too. 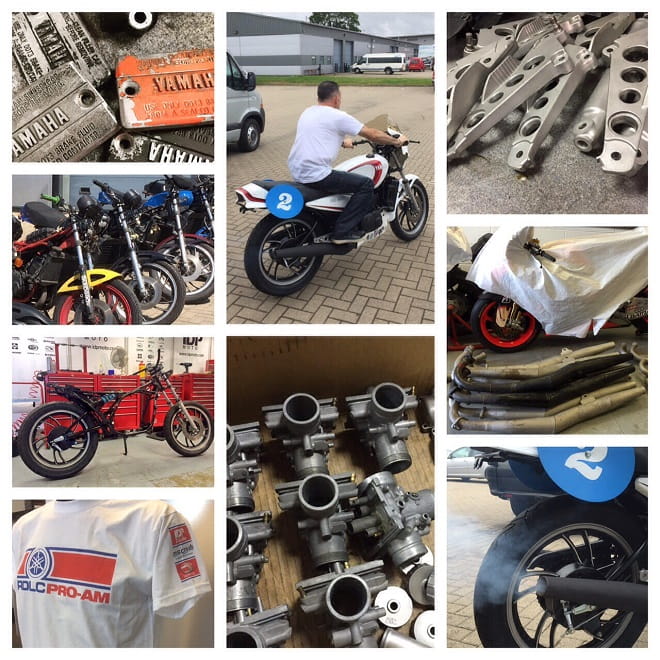 We visited IDP Moto last Thursday to see how things were going and the bikes were all in a million pieces. Frames had been powder-coated, and at least four bikes were in boxes, with cartons of LC parts all over the workshops.  Another 26 bikes were outside waiting for their turn in the workshop.

The deadline of this Tuesday morning, when race-backer Bennetts hosted a media day to launch the proejct to bike journalists, loomed heavy.

Against all odds, on Tuesday morning with the midnight oil well and truly burnt, and extinguished, the smell of Castrol R once again lit up the Silverstone air ready for the launch. The first bike was ready to ride.

In the metal the freshly restored LCs are exemplary in their preparation, They’ve been thoughtfully restored to replicate the original ProAm RD350LCs (these bikes are all 250s to keep costs down slightly).

They're correct even down to the drab olive green coatings on the radiator caps and bottom fork yoke. It’s testimony to the work of Daryll Young and his team at IDP Moto that the bikes are so faithful down to the number boards and race fairings. The right brake pads couldn't be found as EBC stopped production of the EBC green pads for the RD250LC, but they agreed to make a one-off batch just for the race bikes. 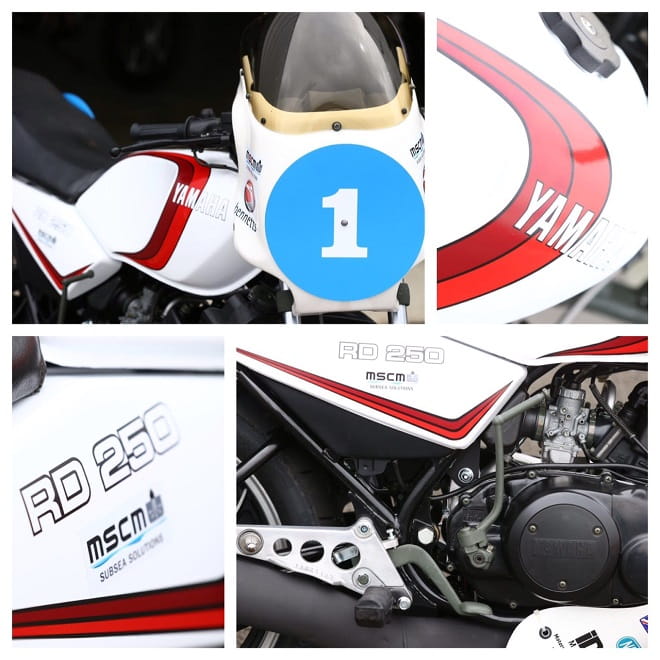 All the bikes are identical and in the same basic spec as the eighties race bikes, but each of the 2015-versions are fitted with modern Nitron rear shocks and revised fork internals. The fairings replicate the original Pro-Am bikes, and there are new Continental classic racing tyres. The spec of the engines, the frames and the brakes are pure period Yamaha RD250LC and all put back to standard.

The only real modification, except for stripping them down and removing rear grab rails to discourage grabbing hold of them in the race, is to the rear brake pedal to tuck it in and improve ground clearance.

Because most of the bikes were sourced from Switzerland and Germany they are also restricted with washers in the exhausts, all of which have to be chopped open and removed before being put back together and stripped and painted.

It’s a crazy, ambitious plan that has seen the team stretched beyond their own overactive imaginations.

But today it’s all come good. Niall Mackenzie, a GP legend who started his race career in the Pro-Am series is the first man to ride one, set the bike up and put some miles on the box fresh engine.

He said: “Riding it today brought back all the memories, all the rivalry. It was a fantastic series because it was brilliant, close racing. It launched my career, and above all was free! When we first thought about bringing it back I wasn’t sure it could be done as all the bikes would need to be bought and brought upto spec. It’s a massive job. But after a few meetings I was convinced it could be done, and here we are. I’m really proud to be involved.”

After Mackenzie has put some miles on the first bike and scrubbed the tyres in, we got to ride one.

When it comes to race day all the bikes will be the same, it’s keys in a hat, and that’s the bike you use for the race. One thirty minute qualifying session and then game on, gentlemen start your engines.

Just imagining Nigel Bosworth vs Jeremy McWilliams vs Niall Mackenzie and 20 other blokes with a 35-year-old score to settle gets me just as excited as watching Marquez and Rossi duke it out. Though we’re not sure what a lap time around the full Silverstone GP circuit will be, maybe measured in hours, not minutes? Place your bets please!

A lungful of two-stroke on a Tuesday morning is better than anything you can get in a cup to wake you up.

When the lungful is being delivered by a two-stroke RD250LC ridden by Niall Mackenzie that in seven weeks’ time will race in the British MotoGP, it’s even sweeter. 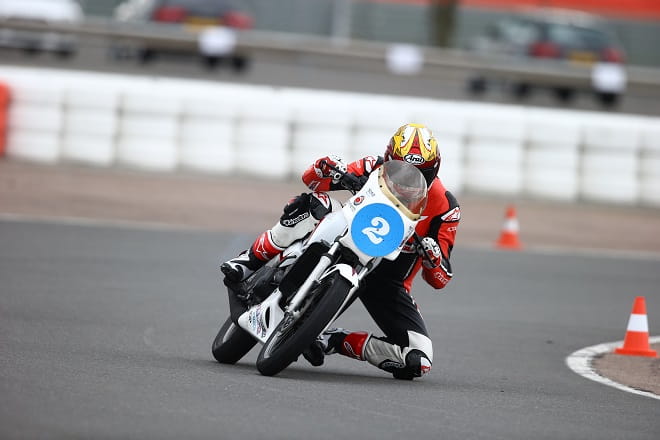 Bike journo Al Fagan of 44 Teeth gets a go before me and hands the bike over. Wide-eyed and full of adrenaline, he shouts: “That thing is f***ing awesome! I was knee down everywhere!” Then hands me the bike.

Way back in the midsts of time I raced an RD250LC at a club race at Mallory Park, and used to run around on an RD350LC when I first started working for Motorcycle News in the nineties.

But that was a long time ago, I weigh about five stone more than I did then, and the bikes are some 35 years old! But the feeling is still the same. That precious, grumbly rattly two-stroke noise, the fat petrol tank with the knee indents and the wide bars. It feels like home, sounds like part of my youth, and I’ve got five laps to not crash it.

The bikes were finished and rebuilt yesterday. No price has been settled on the race 250s, but Daryll says for him to get an RD350LC to this spec including sourcing the bike would cost between £7000-£8000. Even though this is a slightly less valuable 250, I’ve got to be careful. 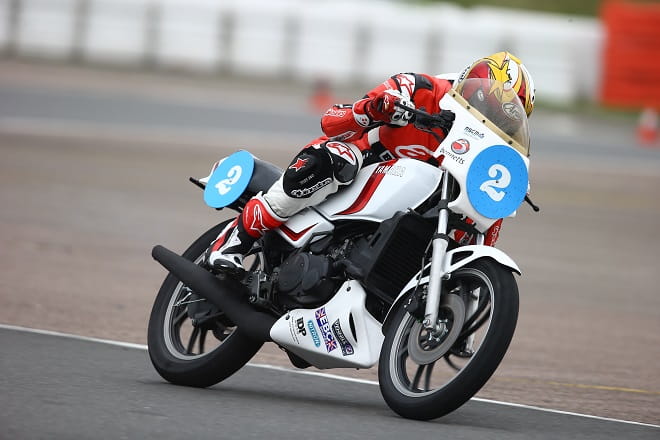 The LC is tiny, low and very flat to sit on top of compared to modern bikes. Earlier, I’d been riding some of the latest batch of 300cc entry-level sports bikes.

In all honesty, all of them would kill the LC in every way. But none of them are as cool, or make such a great sound when it gets on the pipe. And will any of them be around as long as this bike? I doubt it. The clocks aren’t connected up but this one has done 48,000km. One I saw pre-restoration earlier in the day had a recorded 92,000km on the clock!

It's slow, but hilarious. It handles, the shock is stiff and the front forks are soggy at best. The brakes are pretty much non-existent if you’re used to modern bikes. But none of it matters. You can get it heeled over (even in damp conditions when I rode it). The modern tyres work and the power never troubles them.

It’s an experience I’ll never forget, and I can’t’ wait to be sat on a bank at Silverstone on August 30 when a pack of them with riders older than the bikes fly past in a blue haze.

Special thanks to IDP Moto, Silverstone, and Circuit of Wales.