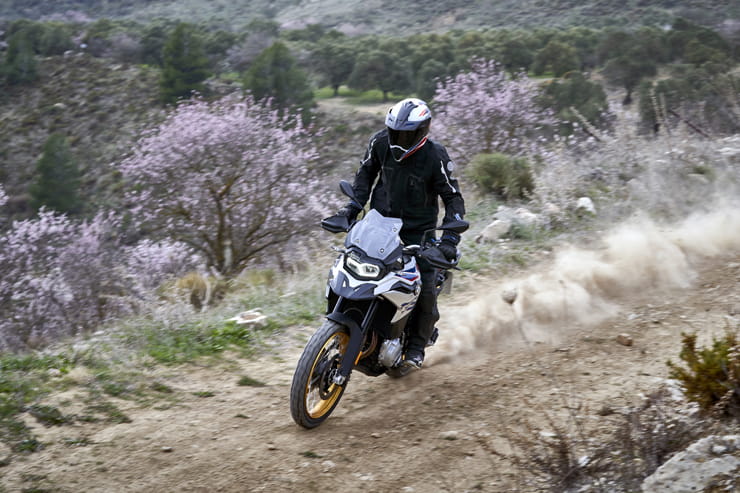 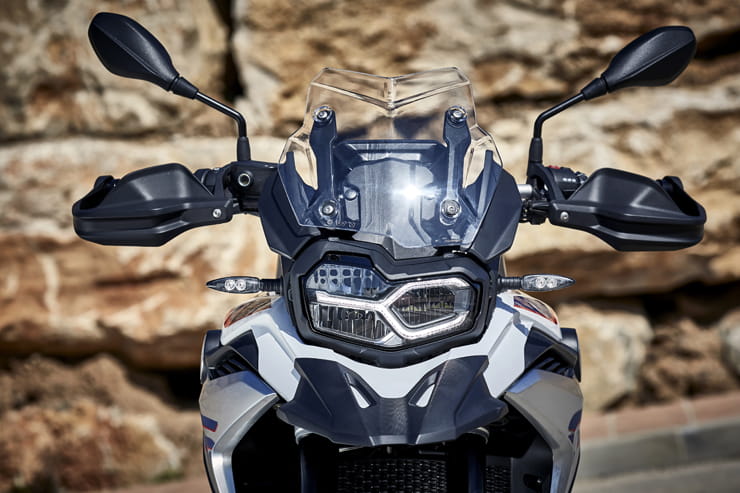 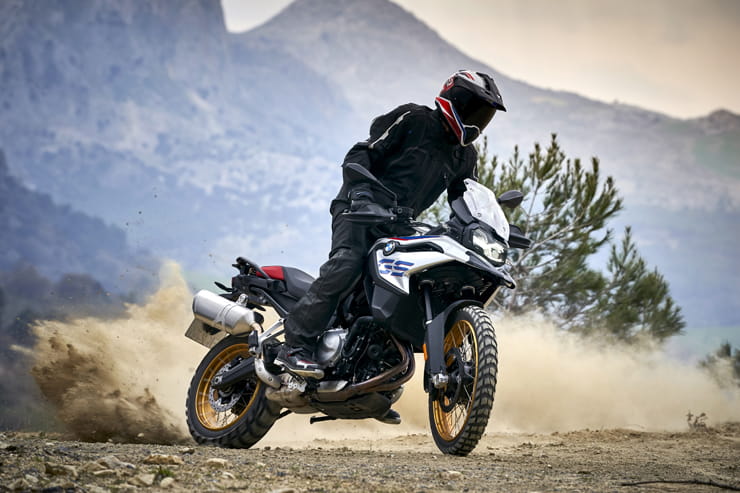 Who doesn’t love a BMW R1200GS? Well, to be honest, those who are a little shorter in the leg. Or those who are intimidated by the GS’s sheer physical size. Let’s not beat about the bush here, as wonderful as the R1200GS is, it is still a big old bike and for some riders it’s simply too much, especially if they are considering some off-road action. Not only is there the thought of tossing 244kg and £12,400-plus of Bavarian metal into a ditch, there is also the slight worry of those horizontal cylinders landing on your leg and leaving something of a lasting impression… Step in the new 2018 BMW F850GS.

Originally launched back in 2008, this is the bike’s first major update and for 2018 it has received a host of revisions that have turned it from a middleweight off-roader with some neat road-orientated features to what can now be described as a true mini-GS. And that is a very good thing indeed.

Starting at the motor, the parallel twin is a ground-up new engine for 2018 and features an impressive set of changes. The old model’s GS boxer-mimicking crank and firing order has been changed for a new 270/450 firing interval with a 90-degree offset and the single horizontal balancer shaft replaced for two opposed items. Why? According to BMW this design not only improves fuel economy and power, it also makes for a smoother ride. And while we are talking power, the F850GS kicks out 93.7bhp with 67.9ftlb of torque, which can be electronically restricted down to an A2-legal 46.6bhp with 46.5ftlb of torque if required. The first three gear ratios have also been lowered for better instant drive in town and off-road while the top three increased in length to provide a more economical and relaxed road ride when up to speed. An updated slip and assist clutch has also been added to make the clutch action even lighter. 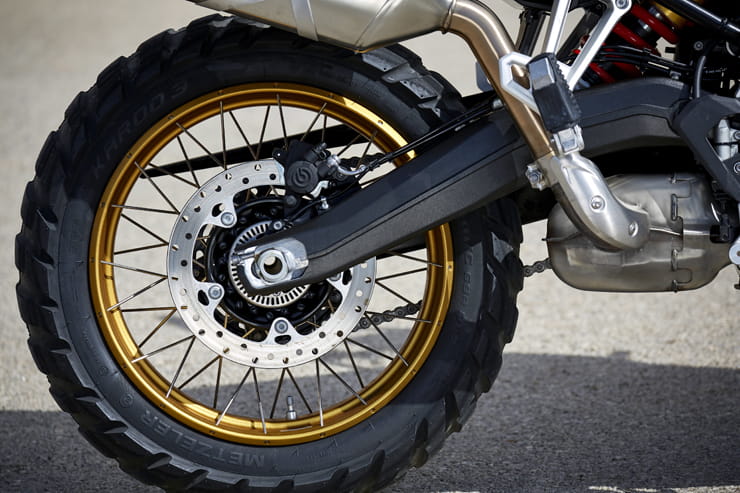 Externally, the chain drive (no shafts here) has been moved to the left hand side and the exhaust to the right, which BMW say is because when you need to get it out of the mud, riders generally push the bike from the left and on the old model that meant leaning against the hot pipe. The frame is also new, the fuel tank moved from under the seat to a more conventional position in front of the rider and the F850GS gets 43mm inverted forks with a 21-inch front wheel. But it is what is happening under the bike’s covers that are the biggest improvements…

While the GS gets ABS, TC and two riders mods as standard, tick a few boxes (or buy the Sport variant) and angle-sensitive ABS, dynamic traction control and extra power modes can be added along side Dynamic ESA, which is an optional extra even on the Sport. On a middleweight adventure bike, that’s an impressive spec list and alongside the optional TFT dash with its full connectivity, basically puts the F850GS on a par with the R1200GS in terms of technology. And that’s the key to the F850GS – don’t think of it as the poor man’s R1200GS, think of it as a lightweight GS. 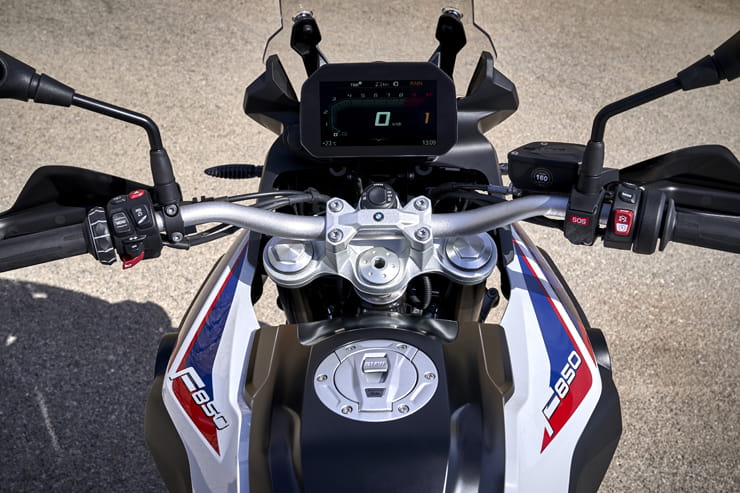 While the new F850 engine lacks a bit of the aural charm that the old boxer-mimicking F800 motor had, as a unit it is hard to fault. The power delivery is far more akin to a smooth V-twin and it feels refined when compared to the slightly raw older motor. There is more than enough power and aside from a gearbox that can get a little clunky at low revs if you use the Gear Shift Assistant, it’s all very impressive. And the electronics actually enhance it with the various power modes making a noticeable difference to both the power delivery and throttle response. Not to mention the bike’s actual dynamics.

All of the F850GS’s electronics are linked, so if you swap from ‘rain’ mode to ‘dynamic’ the ABS and traction control also alter their sensitivity accordingly. And if Dynamic ESA is fitted the bike’s ride quality is also enhanced, which is important to note. In ‘rain’ mode the F850GS does feel a little soft on its suspension, however swap to ‘dynamic’ power mode and also enter ‘dynamic’ on the ESA and it firms up, delivering a more assured ride that can be further enhanced by increasing the spring preload (while stationary) by telling the ESA you have a pillion on the back. Due to the fact it has long travel suspension to suit its off-road targeting, and a 21-inch front wheel, there is always a limit to just how far the softness can be dialled out, but the F850GS is far from a bad handling bike. If fact, it’s very good. But what’s it like when the tarmac gives way to gravel? 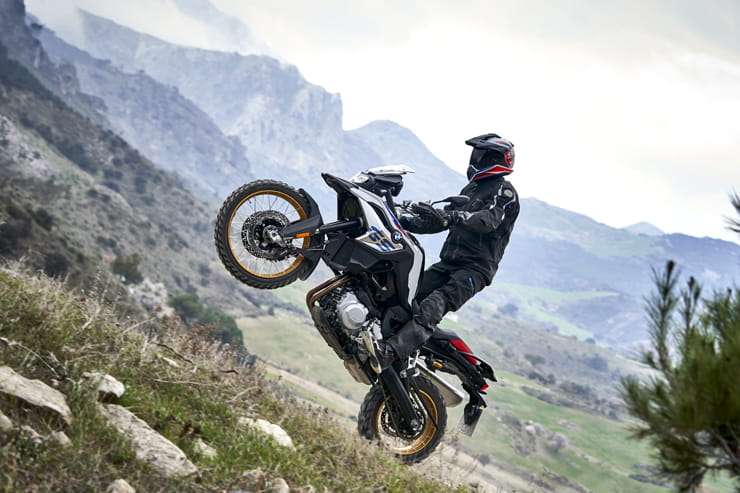 As something of an off-road novice, big adventure bikes can be pretty intimidating when you take to the dirt. But thanks to its 21-inch front wheel, and very competent Bridgestone A41 tyres, I found the F850GS impressively confidence inspiring. The new tank is narrower than the older model’s unit around where it meets the rider’s seat, allowing you to grip the tank better with your knees and get your weight further over that front wheel when stood up on the pegs. This stance give you an excellent feeing for what the front wheel is up to while the electronics look after the rear. With the Riding Modes Pro fitted, which adds Enduro and Enduro Pro power modes, selecting Enduro Pro disables ABS to the back brake but keeps it at the front while the traction control allows a reasonable amount of rear end slide, but not enough for it to go too wayward. This electronic safety net, combined with a confidence in the front end, really allowed me to enjoy the GS off-road and it felt anything but its 229kg weight. If you are into off-road, or fancy giving it a shot, the F850GS would be a really good learning tool. With a bit more crash protection fitted, naturally… 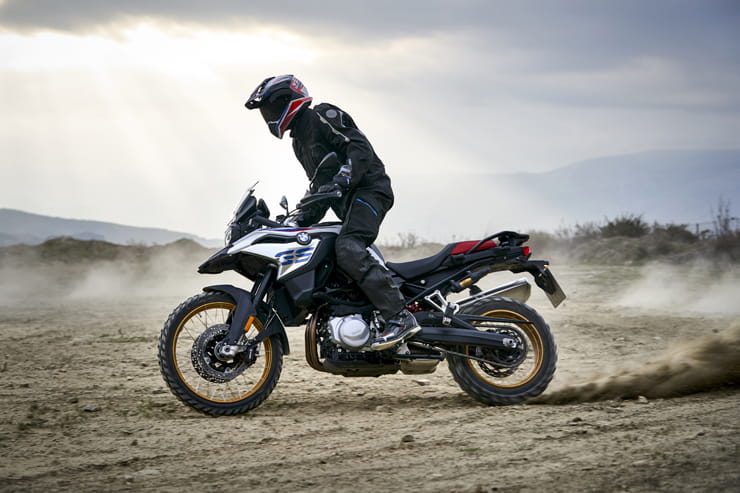 This stance give you an excellent feeing for what the front wheel is up to while the electronics look after the rear. With the Riding Modes Pro fitted, which adds Enduro and Enduro Pro power modes, selecting Enduro Pro disables ABS to the back brake but keeps it at the front while the traction control allows a reasonable amount of rear end slide, but not enough for it to go too wayward. This electronic safety net, combined with a confidence in the front end, really allowed me to enjoy the GS off-road and it felt anything but its 229kg weight. If you are into off-road, or fancy giving it a shot, the F850GS would be a really good learning tool. With a bit more crash protection fitted, naturally…

The older F800GS was a bike that tended to slip under the radar slightly as many viewed it as too off-road focused for day-to-day use. The new F850GS further enhances this off-road ability, which some will be pleased about, but more importantly it also dramatically improves its appeal as a road bike thanks to R1200GS-matching electronics. With a comfortable riding position and loads of luggage options, the F850GS feels more than ever a lightweight GS. It’s certainly not perfect, the screen is irritatingly low and has no adjustment, but if you like the idea of owning a GS but the sheer size of the R1200GS puts you off taking the plunge, the F850GS may well be the ideal adventure bike for you. 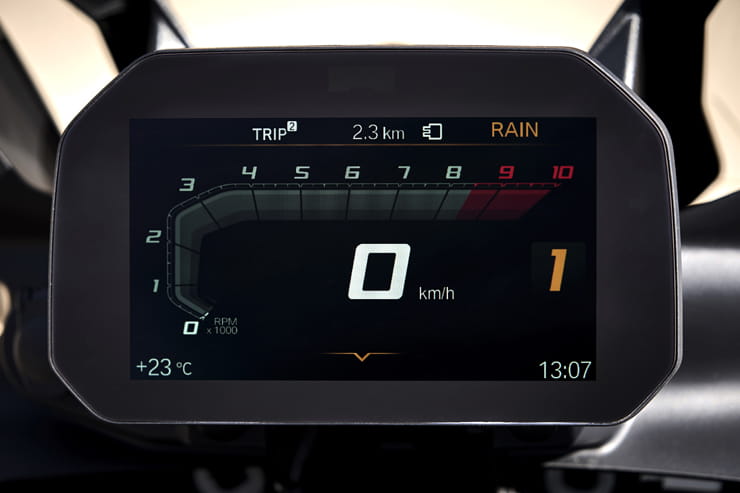 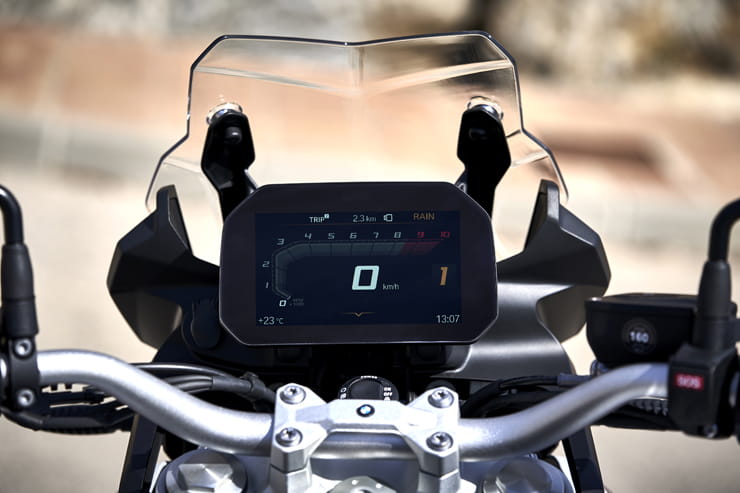 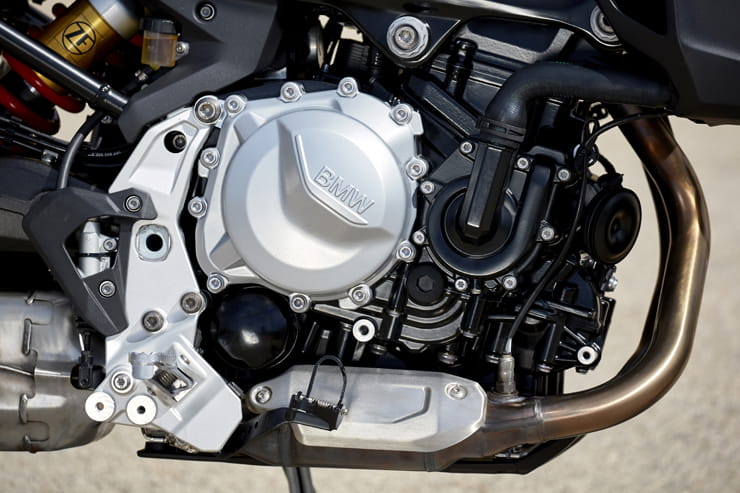 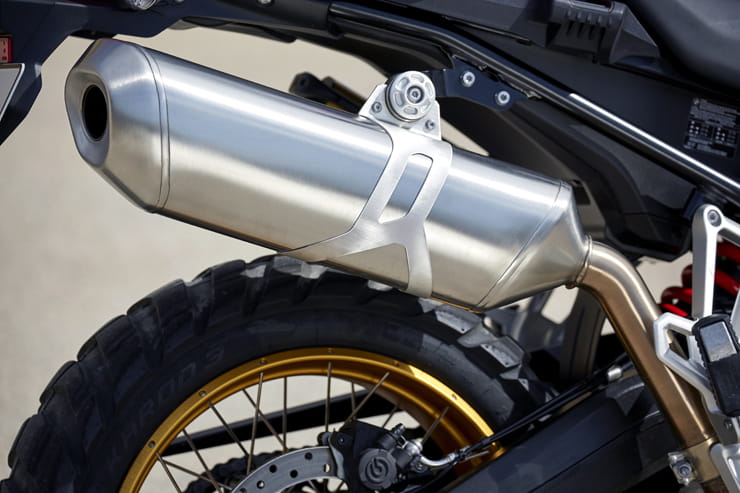 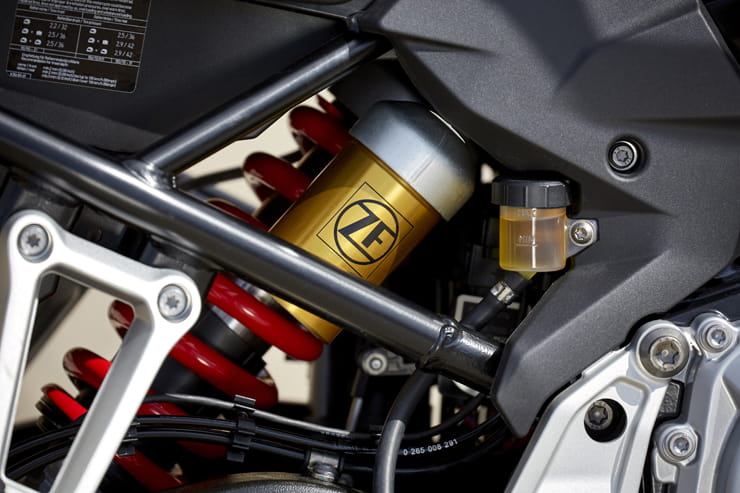 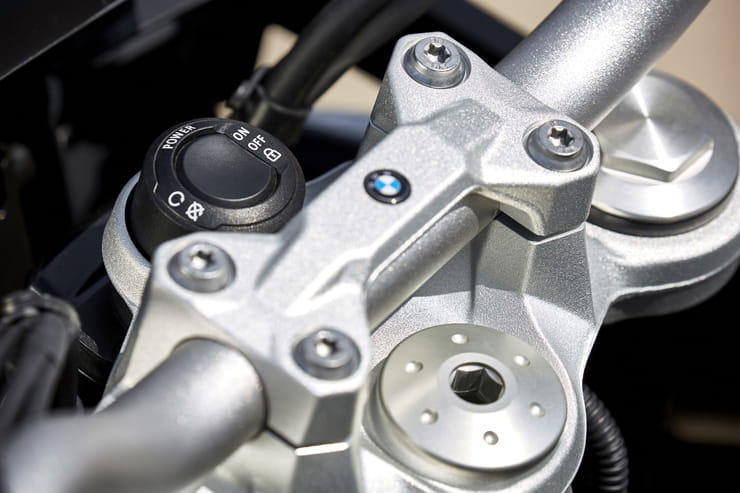 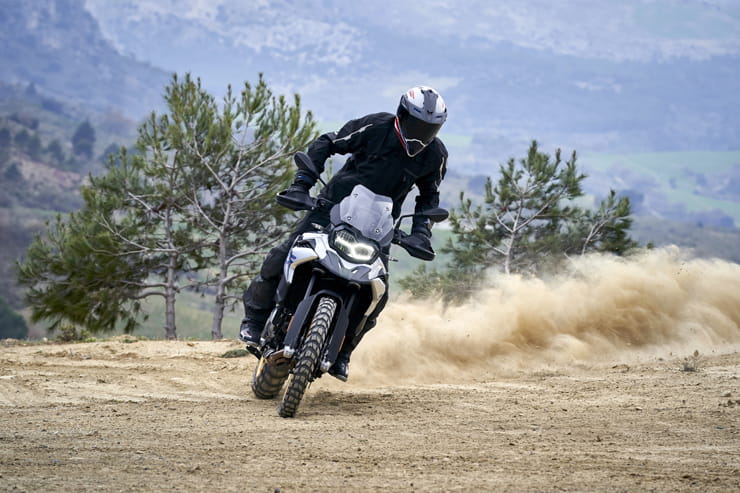