With fuel prices seemingly on the rise again slightly, partly due to the effect of Hurricane Harvey in the USA, fuel economy is once again on people’s minds. But how fuel-efficient are the latest and most popular bikes? Should it affect which bike you buy? And is there anything you can do to maximise the mpg of your bike?

To make things easier for you we’ve researched all the leading bikes in the 10 most popular biking categories. Here’s our pick of the bunch, in ascending engine capacity: 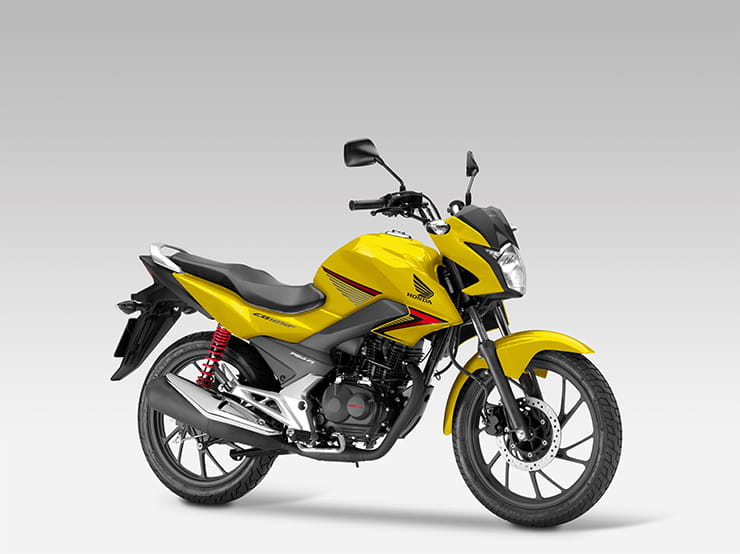 Although it can’t quite match the economy of its CBF125 predecessor or live up to Honda’s claims of 150mpg, Honda’s latest CB, as introduced in 2015 is still the class-leader in terms of fuel efficiency. What’s more, being simple and easy to ride and costing £2799, it makes a great commuter. Watch out on dual carriageways, though, as top speed is only around 65mph. 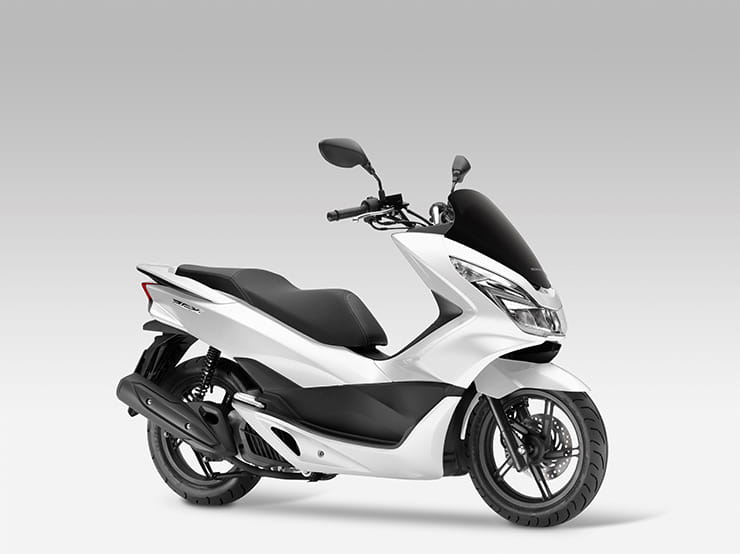 The PCX is Europe’s most popular 125 scoot and was updated to meet Euro4 last year. The ultra-efficient engine includes start/stop helping it towards its impressive 100mph average. Funnily enough, it costs exactly the same as the CB125, at £2799. 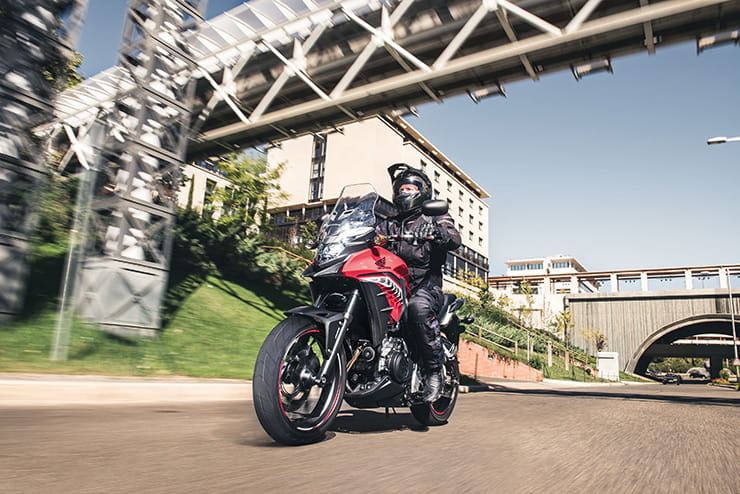 The X is the most popular, adventure-styled version of Honda’s A2 licence-targetted CB500 parallel twin family (which also includes the CMX500 Rebel custom, CB500F roadster and CBR500R sportster), which all just pip KTM’s Duke 390 single, which returns an average of 59mpg. It currently costs £5799. 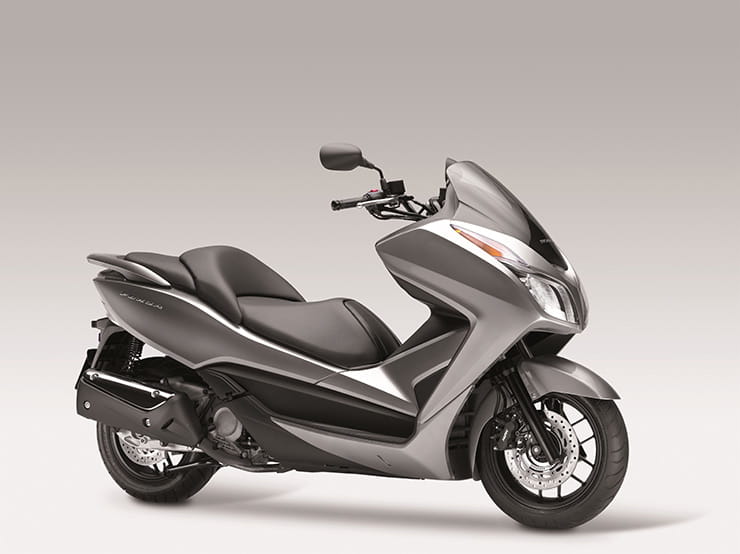 Yup, another Honda, but then the Japanese giant always has prided itself on its engines’ efficiency. The Forza is hugely popular on the Continent especially and, with its liquid-cooled engine producing 26bhp, is easily capable of carrying two in comfort over distance. It’s currently priced at £4699. Close behind with an average of 63mpg is the stylish and beautifully built Vespa GTS300 although that is more of a solo, city machine. 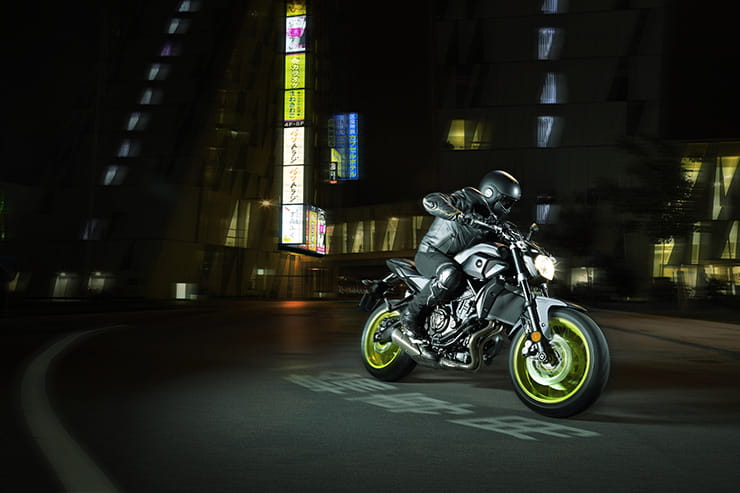 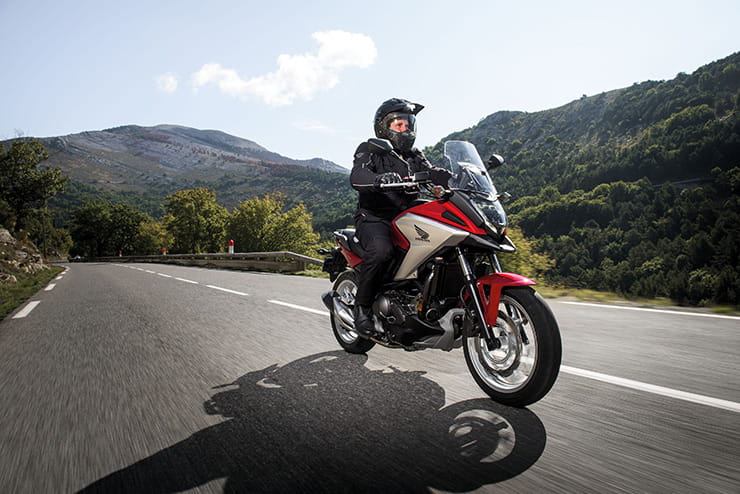 It’s no real surprise the NC leads this class for fuel economy. First introduced in 2012 as a 700 and most recently facelifted in 2015, it’s based around a low-revving, car-derived twin that’s intended to be frugal and completely unintimidating – which it is. From £6299, with a scooter-style luggage compartment in its false tank and a semi-automatic DCT version also available, it’s exactly that. If you want more excitement, Yamaha’s MT-07-based Tracer returns 55mpg, Suzuki’s SV650-derived V-Strom 650 51, the same as Kawasaki’s Versys 650. Triumph’s popular but three-cylinder Tiger 800 returned an average of 43mpg. 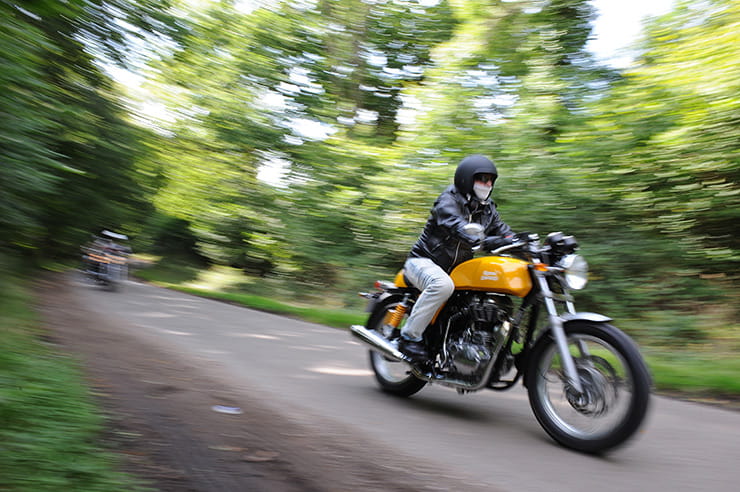 In recent years retro-styled machines have become hugely popular with Britain’s own Triumph leading the way with its popular Bonneville family of twins, which were completely updated in 2015 and 2016. Leading the way of these is the 1200cc Bonneville T120 that returns an average of 50mpg. Most of its rivals aren’t far behind though, with the Moto Guzzi V7 averaging 48mpg, Ducati’s recent Scrambler 45mpg and BMW’s R1200-based RnineT 42mpg. Best of all however, is Royal Enfield’s £5199 Continental GT, with the air-cooled, single-cylinder café racer returning 60mpg on average although it has to be said that, with just 29bhp, it the Indian-built machine certainly can’t match the performance of those rivals. 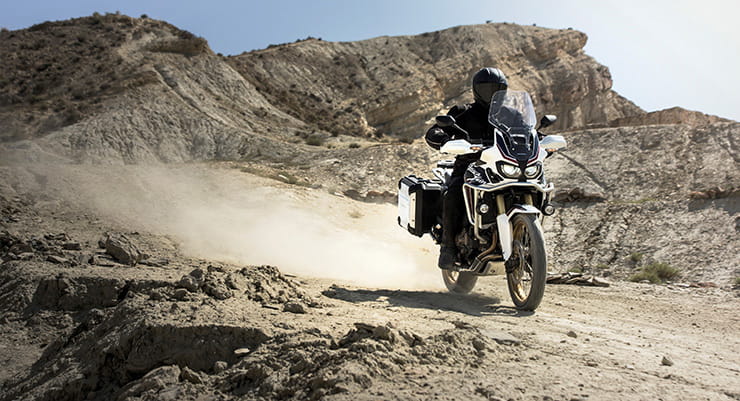 The most popular category of the past 20 years has also now evolved into one of the most competitive and sophisticated with the leading machines from KTM and BMW now 1200cc behemoths bristling with equipment and features – which isn’t the most conducive to fuel economy. For instance, Ducati’s latest 1200 Multistrada now returns an average of 37mpg, BMW’s R1200GS is little better at 39mpg and KTM’s biggest 1290 Super Adventure produces 40mpg. So it’s probably no surprise that the most fuel-efficient bike in the class is the all new, relatively lightweight and simple, CRF1000 Africa Twin as introduced in 2016 by, yes, Honda, which returns on average 46mpg. It costs from £11,210. 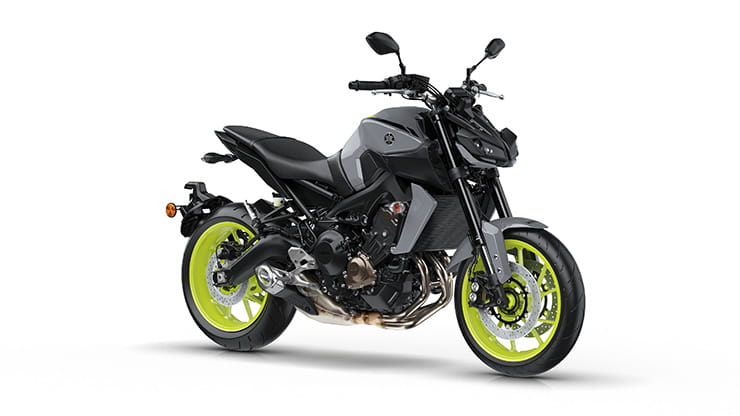 As has been the case in the middleweight category with the MT-07, Yamaha’s MT-09, its three-cylinder bigger brother, has proved a huge success in the larger naked bike class for its combination of performance and value. Here, too, the MT engine has proved impressively frugal, not just compared to four cylinder rivals (Kawasaki’s Z1000  returns 39mpg, as does Suzuki’s GSX-S1000), but even the established three-cylinder class king, Triumph’s Speed Triple, which averages 37mpg. Updated for 2017 to meet Euro4, the MT-09 produces a punchy 115bhp, is light and nimble and costs from £7699. 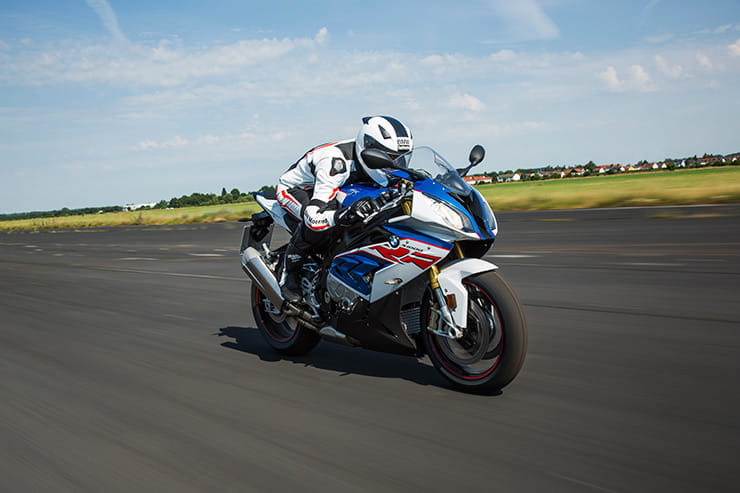 True, you wouldn’t expect 1000cc superbikes to deliver much in the way of economy and their focus, and that of their owners, is more on outright performance, but there are differences nevertheless. But while bikes like Ducati’s 1299 Panigale, Yamaha’s latest R1 and Aprilia’s RSV4 all return around 30-31mpg on average with Kawasaki’s ZX-10R a touch better at 33, BMW’s all-round brilliant S1000RR also produces the best economy on average, with 36mpg.

All the above figures were taken from http://www.fuelly.com/motorcycle which lists mpgs of almost all models and years using data collected from actual riders, worldwide.


Happy with your bike but want to improve your fuel economy? Here's some top tips on how to get the best out of bike from Ian Biederman, Chief Instructor at BMW Rider Training:

One of the simplest things to do yet something that is often overlooked. Ensure your tyre pressures are correct and in line with the manufacturer’s guidelines. Too soft tyres increase drag and adversely affect your machine’s fuel economy. Another positive consequence is that this also improves the bike’s handling and should make you feel happier and more comfortable on the bike.

Ensuring your bike is regularly serviced and well maintained can make quite a difference to the economic properties of the motorcycle. A poorly set up machine will certainly use more fuel as will things such as a poorly lubricated chain.

Smooth, careful use of the throttle, especially when moving away from stationary, improves economy dramatically. Try to avoid traffic light races, a motorcycle is considerably lighter than a car and can easily get up to road speed with minimal effort and strain. You will find that just a quarter turn on the throttle will happily keep acceleration of your bike ahead of other traffic. Avoid aggressive use of the throttle. It uses far more fuel.

4. Stay in the the mid range

Try to avoid labouring the engine at low revs and also avoid the top third of the rev range. Both extremes use far more fuel.

Look further ahead to anticipate what other traffic is doing.  This way you can reduce your use of the brakes and allow engine braking to reduce your speed.  With careful planning and timing you can often avoid coming to a stop altogether and just gently keep the bike rolling. However, be aware that this can confuse following traffic as they won’t see a brake light. To ensure they don’t run into the back of us a light caress of the rear brake pedal is a good idea to inform other road users that you are slowing down.

Unsurprisingly this will not only save fuel, but also keep your licence nice and clean.

Those lovely panniers may look great on the bike, but they increase both weight and drag and require more fuel to keep the bike travelling at speed. If you carry very little consider removing them and wearing a rucksack instead.

When travelling at higher speeds consider how you are sitting on the bike.  Motorcycles are tested in wind tunnels with riders on them to work out the best airflow.  If you are sitting up into this airflow or your arms and legs are sticking out you are creating drag, which results in higher fuel consumption.  By tucking in a little you reduce drag and often find that the wind noise is reduced thus saving your hearing and allowing you to arrive at your designation less drained.