With The Bike Shed Event III taking place this weekend in London, we asked Ross Sharp from The Bike Shed to give us his lowdown on what will be on display at ‘The Alternative Custom Motorcycle Exhibition’. He's also written up a handy beginner's guide.

So, if you know a Chopper from a Bobber and a Brat from a Rat please pass go, spend £10 and order your weekend ticket here (including daytime bike parking and secure cloakroom); enjoy the spectacle. The video is here of the last two events if you need your appetite whetting. 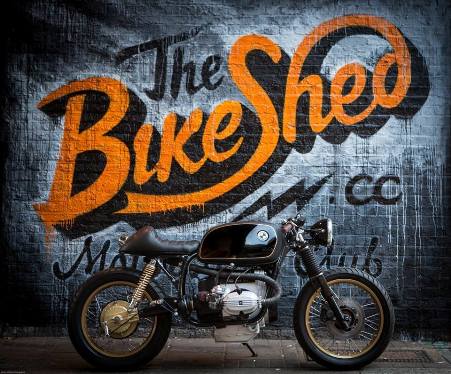 Triumph, Warrs Harley-Davidson, Moto Guzzi and Barbour will be exhibiting with over 120 bikes from Pro- builders Deus, Spirit of the Seventies, Untitled Motorcycles, Kevils Speed Shop, Down and Out Cafe Racers and many more.  And of course, the Shed-builds, normal guys and gals showing off their hard work and creativity.

If you’re wondering what all the fuss is about and why riding two grands worth of 1980’s 250cc Japanese commuter bike will bag you more kudos than pitching up on a Desmosedici, please read on. 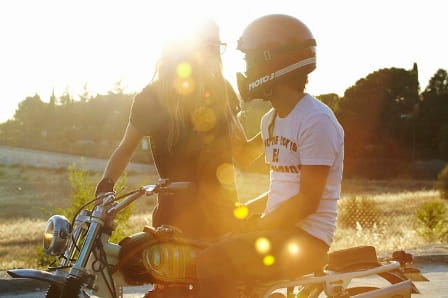 Individualising bikes is not a new phenomena, spanner-handed folk have been building, customising and repairing for over a hundred years but in the last decade a hubbub of activity has been brewing behind roller shutters, barn and shed doors to create a new wave custom scene, with one foot in the past but striding forward with one most definitely in the right now. Built, not bought is what gains the plaudits, not BHP or top speed.

Here’s a quick run-down on what’s what, with a caveat that the lines are blurred between each style, and confusion, argument and conjecture is a guarantee.  But let’s remember that motorcycles embody individuality and those that pour their blood, sweat and tears into a project and put it out there for the world to judge deserve a degree of humility, even if the outcome genuinely is utterly horrible, in your eyes.

There are no hard and fast rules, just interpretation of what has gone before.

After WW2, returning serviceman began stripping heavy and cumbersome parts from old battle steads, ditching the front mudguard altogether and bobtailing the rear to make it shorter for a tidier look.  Back in the day Harley-Davidsons and Triumphs were the donor of choice for a Bobber but now the basic principles can be applied to almost anything.  Low and sleek, sometimes with a rigid, hard tail frame and sprung saddle. Batteries, oil tanks and wiring looms are painstakingly hidden in a quest for vintage minimalism. 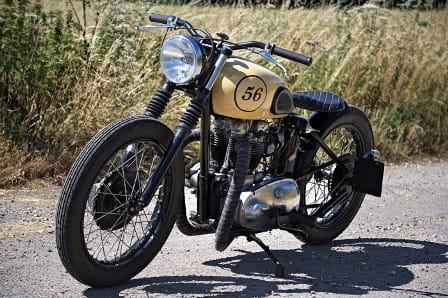 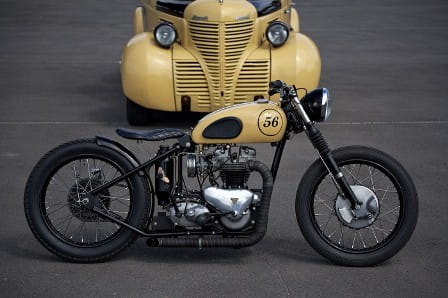 70s & 80s Honda CBs, Yamaha’s ever-adaptable XS and of course the BMW R series are popular donors and supply is plentiful but anything will do, large or small capacity.  The Brat style is possibly the simplest route for the first-time builder.

The Brat builder will usually start at the rear and hack off the back portion of the subframe, welding in a loop to tidy the frame tubes and provide a base for a super slim, flat seat. Front ends are often upgraded with modern forks and brakes, frequently mated to an oversized front tyre. Clutter is a no-no with many preferring to fabricate custom battery boxes, hiding the wiring and keeping the rear triangle completely clear leaving the engine and paintwork as the main event. 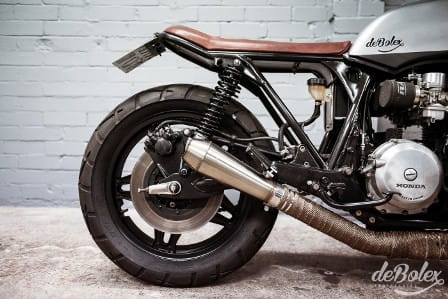 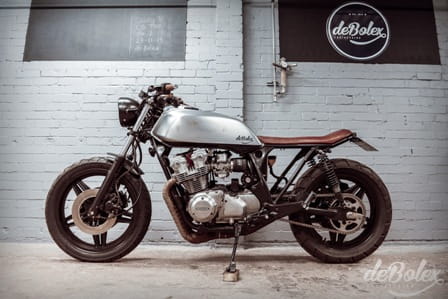 Steve McQueen gliding across the desert scrub, half-dressed on modified Triumph, Husqvarna and Honda scramblers is the stuff of legend and much imitated today.  High pipes stacked on one side, wide flat bars, longer forks and shocks, knobbly tyres and a bit more meat on the seat are the obvious visual clues that the builder’s intentions are to let rip across Baja, or simply get to the pub in style. 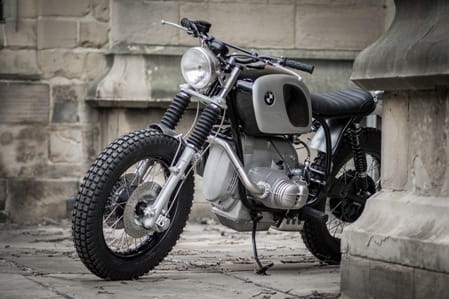 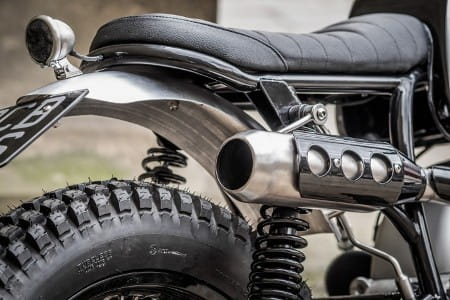 The Street Scrambler has been born out of the need to look the part when riding is predominantly city based. Triumph have been selling these, ready to ready-to-ride out of the showroom for sometime and Ducati are fettling their offering ready for next year. Kawasaki UK commissioned Spirit of the Seventies to build this W800, further proof that the manufacturers are on board with the shift in motorcycling culture. 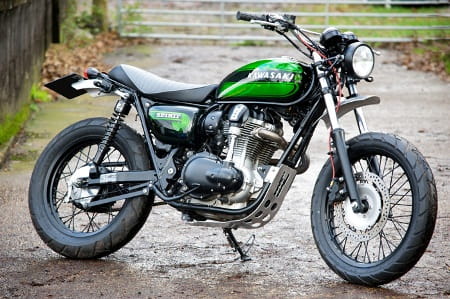 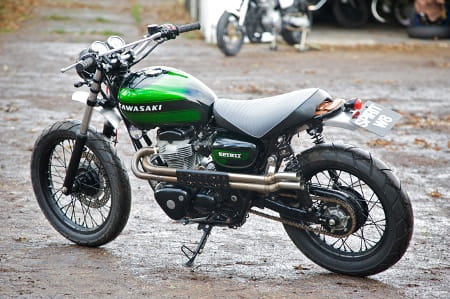 Still not sure? Try this

When Speedway racing hit the USA it received the usual American treatment, “make it bigger and bolder”  Mile-long dirt or sand oval tracks hosted gruelling, super-fast, turn left only races from the 1950s until today.  BSA and Triumph ruled the roost before Harley-Davidson really got into their stride and dominated for decades. Fat-ish front tyre, stubby forks, no front brake (on track only), pipes up high on one side, a thin and slim long seat and a peanut fuel tank are the race-derived aesthetic mods with mega-wide and laid-back handle bars necessary for sliding these beasts around. 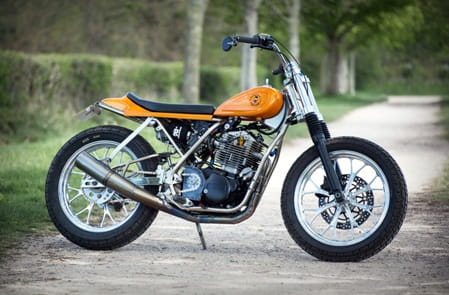 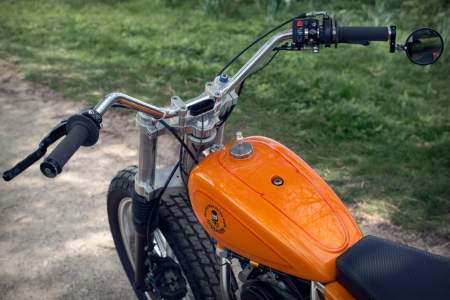 As with the scrambler, bikes without true dirt ambitions have been given the turn left, go sideways look whilst getting you to work using normal roads.  Perhaps the most extreme example is Roland Sands Designs’ Desmo Tracker, check the ridiculous video here. 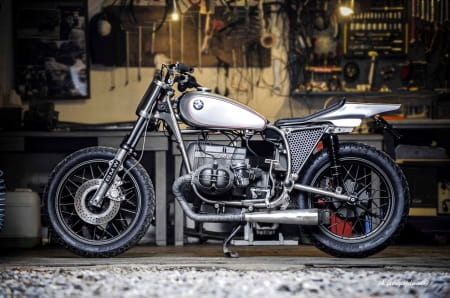 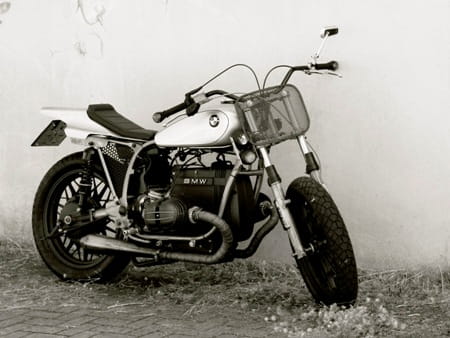 This style courts controversy as it’s an easy term to band about without acknowledging the classic bikes and people around which the scene formed.

Riding position will offer the most obvious clue with clip-on handlebars, foot pegs moved rearward, a rounded tail section, a long fuel tank and occasionally a front fairing all suggest a spirited bridge-to-bridge racing set up. In reality this category sees the greatest variation with knobbly tyres, upside-down fork and drum brake combos and exhaust pipes in odd places.  Cafe-Brat-Scrambler-Bob has yet to be used to name build but sometimes it would be fitting. 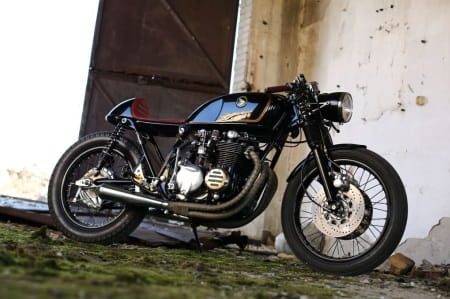 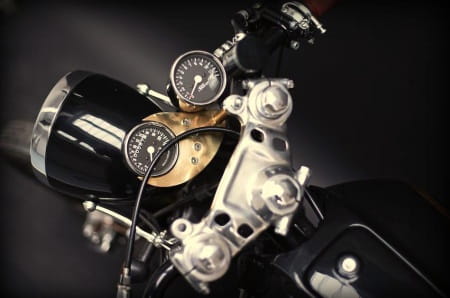 At four-times the size of the last two, Event III is proof that the custom scene is here to stay. Big name brands, manufacturer sponsorship and builders clambering for exhibition space has left the man behind it all, Anthony ‘Dutch’ van Someren, with no choice but to plan a permanent venue.  Details to be announced once the dust has settled in Tobacco Docks.

Dutch told us, "Our doors are open to all.  The unintimidating, friendly crowd from the last two events will be sure to return to make for a relaxed day out and with over 100 bikes on display from the world’s leading custom builders and upcoming shed-based talent, gear and clothing to buy and artwork too, you might want to make a weekend of it. We’re excited to have Triumph and Barbour sponsoring this year’s event and they'll be unveiling a brand new Scrambler, built exclusively for the show. The weather is supposed to be good so gather your mates and ride on over, we’ll have an ice cold beer waiting for you".

Huge thanks to Dutch, Ross and all at The Bike Shed for the insight. Hope the event is a mega success! 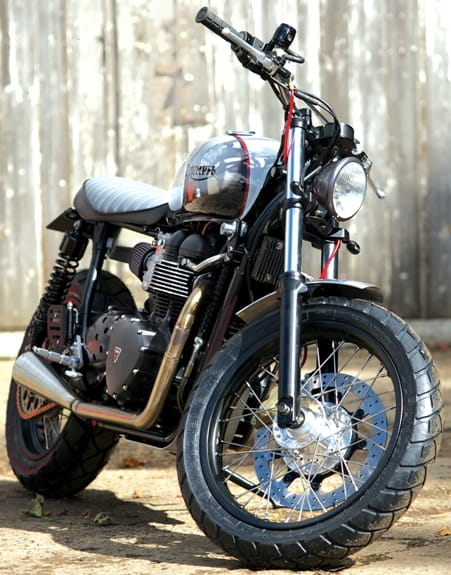