There's something addictive about the way a big twin hooks up and powers out of corners – once you get the taste for it, fours feel bland by comparison. They make a great noise too. We've rounded up a selection of sporty V-twins that'll keep you happy on the road and won't disgrace themselves in the fast group on a trackday. At around five grand, they won't break the bank either – although they might break your neighbour's windows when you rev them up on the drive... 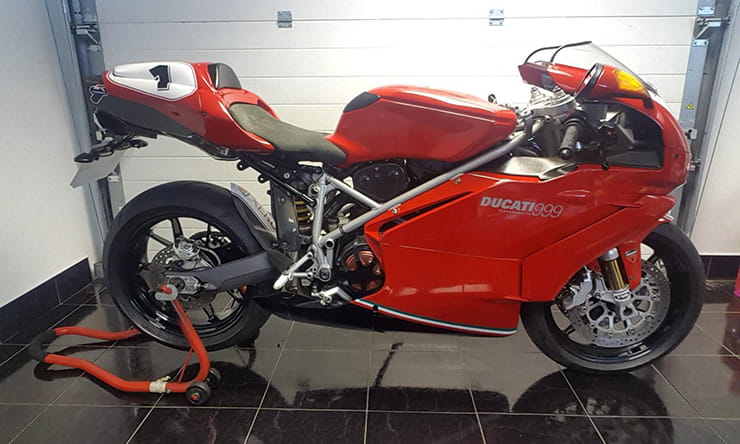 What, no 916? Not at this price point, sadly, although you can just about find a useable 748, and they're arguably even more fun. But since we're talking big twins, there's a lot to like about the overlooked 999. Pierre Terblanche's slabby design wasn't initially well-received as a replacement for Massimo Tamburini's curvy and sinuous 916/996 masterpiece, but it's aged pretty well. The power, handling and braking are up to anything most road riders can throw at it, and they're surprisingly reliable, so don't let the mileage (28k) put you off. It's got Termignoni cans, some carbon bling and adjustable levers, but is otherwise pretty standard. There's no mention of service history, so we'd budget for a new set of cambelts and a valve check at the very least (valves are due a check evry 6k miles anyway). Specific potential problems to check for include the fuel pump relay, which can corrode and fail, bad earthing in the wiring loom, and poor starting due to a faulty or out of adjustment throttle position sensor. Also check the main coolant hoses, which can rub on the airbox and fairing. There's also a known issue with the main instrument display, which can be affected by moisture and vibration, so check that evrything works as it should. 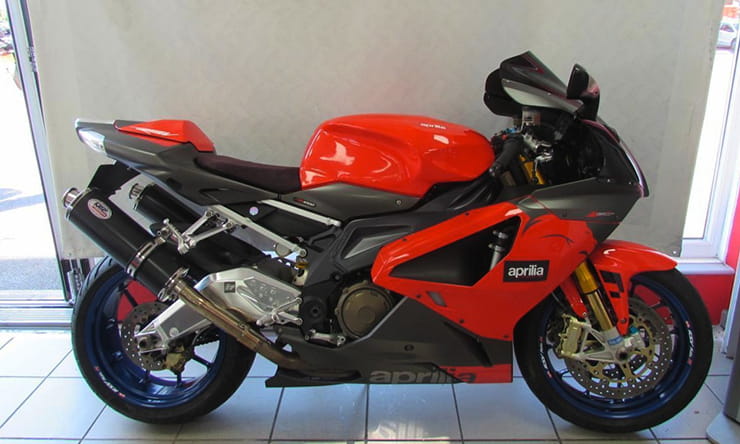 We love Aprilia's big twins - they're much revvier than Ducati's offerings tend to be, and as such easier to adapt to if you're coming from screaming fours. They're also well specced, especially if you go for a later model. By the time this one hit the streets, even the base model had Öhlins suspension, monobloc Brembo radial brakes, and lightweight wheels. This one also has MTC carbon cans, adjustable levers and a couple of other tweaks. It comes with full service history. For the price it looks very nice - clean and straight. Still a few things to check though. The Rotax engine is tough, but they are slightly prone to annoying water pump leaks, and the starter sprag clutch struggles with the load of turning over huge pistons against an elevated compression ratio. Worst case scenario is someone trying to start it with a weak battery - it can kick back and cause expensive mayhem. We'd budget for an upgraded 14 amp/hour battery to be on the safe side. If the clutch feels woolly, or slips on the your test ride, don't panic - it could be the wrong oil causing the problem. They don't like fully synthetic oil and a switch to semi-synth should cure it. Speaking of oil, this is a dry sump engine so checking levels is a bit of a faff. Don't overfill - it'll end up blown back into the air filter. Have a look at the swing arm - if the bike's been in any kind of impact it will have been damaged by the exhaust - a good indicator that you should be looking for repaired damage elsewhere. Front brakes are powerful but need regular cleaning to keep them on form. The rear brake is rubbish - they're all like that sir. 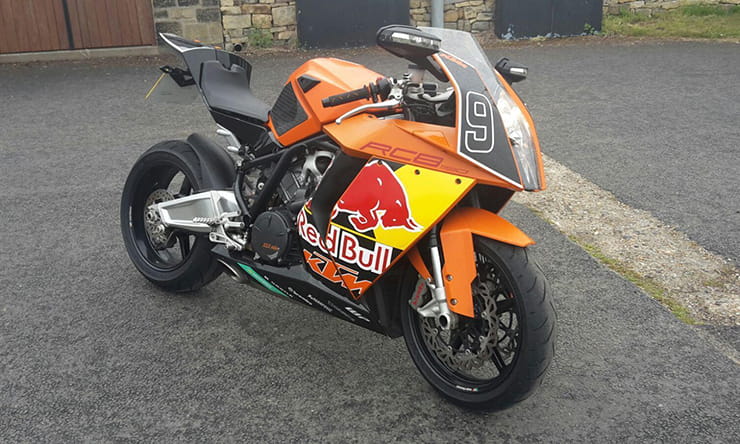 OK, I Know we said under five grand, but we couldn't resist this. Road-going RC8s usually go for a fair bit more than this (you can pick up trackday hacks a bit cheaper) but this is a private sale, so you'd expect to pay a bit less. The RC8 was KTM's first foray into big sportsbikes and despite its radical pointy looks it's actually a very capable and practical everyday bike. Reliable too - we've seen them with three or four times the 20k that this one's showing – so long as you keep an eye on the oil levels (if you don't, you could be waving goodbye to your big ends). Pretty much everything's adjustable, so it's easy to take it from road spec to trackday tool with a bit of twiddling, but there are no complicated electronics to deal with - no traction control, ABS, quickshifters, adjustable modes or whatever. The gearbox isn't great - clunky and the ratios are more suited to the engine's desert rally origins than a sportsbike, but there's enough grunt to get round that. If it's really notchy, or haard to shift, have a look at the clutch slave cylinder - it gets covered in chain oil and crud, and that kills the seals. The fluid needs changing at every service to keep it in top form. We'd want to find out if the fuelling's been re-mapped, since these early RC8s were known for seriously snatchy part-throttle power delivery, not helped by a throttle tube that has only about an eighth of a turn between tickover and full noise. Fitting a throttle tube from an R or later base model helps, but even better is a variable kit sold for Adventure 1190 models. That needs some modification to fit though. Otherwise, we'd suspect the aftermarket paint might hide previous crash damage, and we'd be asking what's happened to the seat pad and rear footrests and hangers. 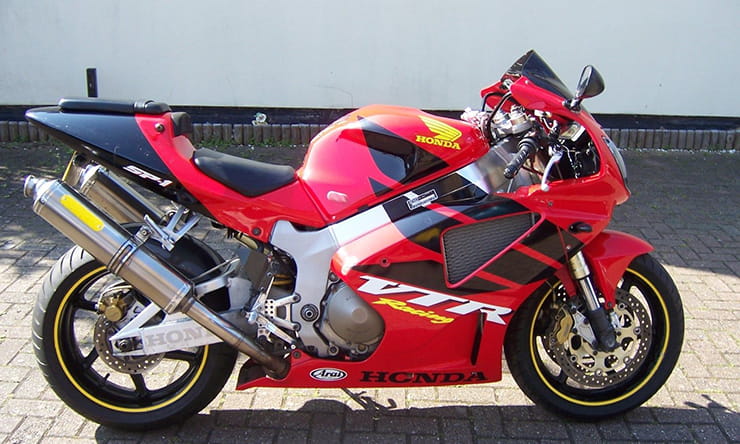 It's a mad – but in a good way - world where you can pick up a slice of World Superbike HRC homologation loveliness for the price of a commuter 125. You won't get a sniff of an RC30 or RC45 under 20 grand these days, but an SP-1 is built to the same standard, and it's a hot tip to appreciate in value over the next few years. They're not usually this cheap though, so why the low ticket? Well, this is an import, and it has relatively high mileage, with over 62,000 kilometres showing. Neither of those things would worry us overmuch, and at this price nor would the lack of service history. We'd be looking at general condition, as well as specifically looking for evidence of previous trackday use (lockwire, wheels chipped from constant tyre changes, heavily-used suspension adjusters etc.). It's fitted with a few extras including Arrow race cans, which even the seller admits are 'very loud' so you might have MoT issues down the line. We'd snap it up at this price, and then try and track down the parts to put it back to completely standard, and convert to UK spec (clocks mainly). The SP-1 was known for slightly iffy fuelling but it's not a deal-breaker. If the fuelling's really bad (jerky, misfiring etc) then it might not be inherent, but a fault with the fuel pressure regulator (or possibly a trapped fuel tank breather hose causing starvation). Electrics on any bike this age always warrant a good staring at - main chassis earth connections and loom connector blocks might need cleaning and protecting. Make sure the battery is good - do NOT try and persist in starting one of these with a weak battery, as starter clutch death is the likely outcome. 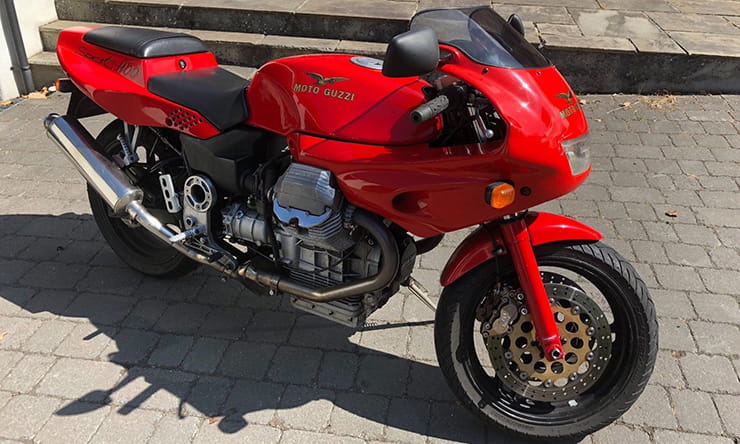 Fancy something a bit different? This should do the job, and you're pretty much guaranteed it'll draw an interested crowd wherever you go. The Sport is a bit of a mix of old-school Guzzi low-revving engine (redline's at 8k rpm)and long wheelbase, with sporty geometry and suspension (including a WP rear shock) - but get it set up right and it can really hustle in the bends. The white-faced Veglia tacho and speedo look lovely too. The biggest problem is that Guzzis are so at odds with normal riding experiences that you need a test ride to know if it's for you or not. That's fine, but a quick run up the road isn't enough - you really need to put in a couple of hundred mixed miles at least, to get into the groove. Tricky, but at this price you could buy this, change your mind and still get your money back later. It's a private sale, and the bike needs new tyres and a couple of odds and sods (although it has an MoT until next May), which helps explain the lower than expected asking price. Going by the km/h speedo, it's an import rather than a UK model, but in this case we don't think that really affects the value. It's also in Cornwall, which restricts the seller's effective advertising radius, so maybe he's priced it accordingly. We'd budget for a full service, new tyres and a brake strip (the Brembo calipers are prone to sticking if they get clogged with dust, and the bobbins on the semi-floating discs also stiffen up). We'd also fit a new battery as a matter of course, although the car-type starter on these engines isn't as prone to expensive malfunction as the sprag clutch versions on the other bikes here. Otherwise it's all the stuff you'd be looking at on any bike from the last century - ageing electrics, sagging suspension, worn-out bearings and general wear and tear.