This week he's gone all Italian to find three Ducatis which have lived in the shadows of their bigger siblings. These bikes, smaller engined versions of the Bologna company's flagship superbikes, have long been popular in the showrooms, but how have they fared over time? 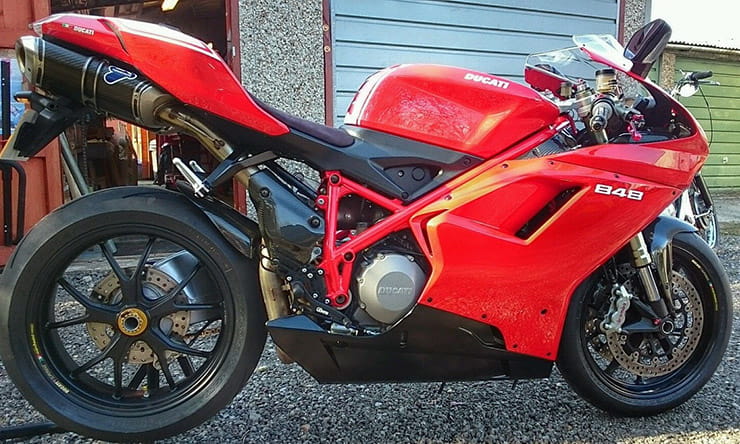 After years of Ducati cobbling up smaller versions of their flagship sports bikes, they finally designed a mini me bike in its own right. The 848 wasn’t just a sleeved down 1098, the engine was a fresh face. The Testastretta motor was good for a genuine 120 bhp, which is not bad at all, even six years on.

The 848 had lots of unique parts, the rear wheel was half an inch narrower than its bigger brother, allowing 180 section tyres to be standard fitment. Many agreed that this helped the 848 to feel more nimble than the 1098. All of the nips and tucks resulted in the 848 weighing 30kg lighter than the outgoing 749 model it replaced, the extra capacity also helped it to be much more pokey too. The 848 still feels modern, even though the earliest bikes are almost ten years old now. Finding a good standard bike is tricky, many owners can’t help but tinker with the 848s blank canvas.

This bike is one of the nicest examples of what I’m talking about.

The quality of modifications starts with the paint. The £800 paint is stunning, added to the prestige is the fact there’s not a single sticker fitted, everything is airbrushed, smart eh?

There’s some Termignoni slash cut silencers and tasty looking rear sets replacing the standard 848 kit. Most importantly is this 848 is blessed with a full service history and a real bonus that it’s been carried out by Ducati dealers. Ducati owners tend to keep their machines for a length of time. This owner is typical of this, he’s had his name on the logbook for three years. At a £6,400 asking price, there’s a lot of bike for your buck. Buy it, look after it and in a few years' time I wouldn’t be surprised if 848 prices rally.

The dash on the 848 comes with all manner of settings to play with.

Testastretta is Italian for narrow head, referring to the slimmer cylinder heads on the 848 engine. 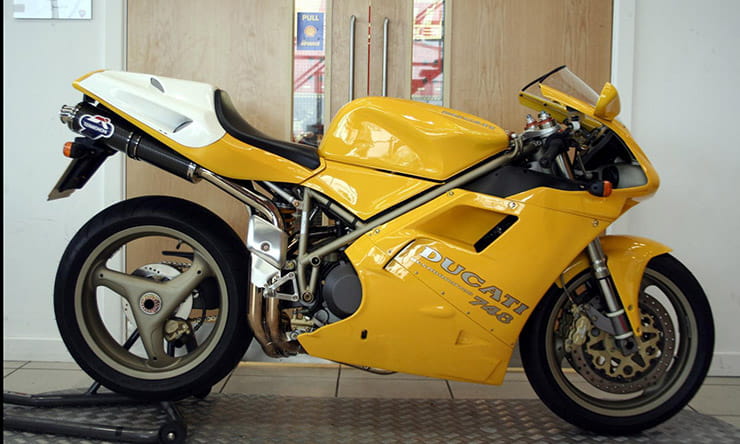 As a poster bike the 916/748 family is still right up there. Despite the design being over two decades old, it's still a stunningly sexy design.

The 748 is basically a 916 with smaller barrels and pistons fitted. As a machine it performs better than the sum of its parts and on a race track many actually rate the 748 over the 916, go figure?

On the road though, it’s very different. The Ducati 748 is high maintenance, and I haven’t even got to the mechanical side of things.

The riding position is crammed, bars are low and the suspension is hard. The killer though is the high ratio first gear, making you fry that dry clutch.

With time marching on, finding a pukka 748 is tough. There aren’t too many bikes with full history kicking about. It’s very easy to buy a 748 and instantly regret it, maintenance can dent your bank balance, and there’s plenty of mechanical issues to consider. These range from cam belts that require changing in line with Ducati schedules, to rocker arms that can wear and fail.

Buy a bike that’s not been treated tight and you might wish you hadn’t.

This bike is a stunner, it’s had a total restoration and it’s also the rare SP model. The SP had cast rotors up front, an alloy subframe, single seat and an Ohlins shock, all very desirable items.

Price wise it’s not cheap, but if you want the best it never is.

If fitted with Termignoni exhausts but make sure it’s got the correct EPROM chip fitted.

There are several specialist forums for all things Ducati. The Ducati Sporting Club site is both friendly and informative. 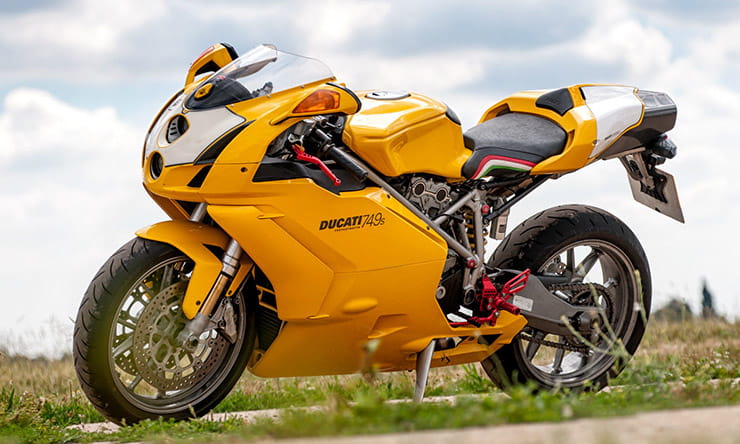 If the 748 is the poster bike, and the 848 give the best riding experience, that leaves us with the 749 to put in a pigeon hole. The 749 might not be the prettiest thing with Ducati stuck on its tank but it isn’t all bad. Welcome to the Ducati cheap seat.

For around the same price as a Chinese 125 you can have an Italian stallion in your shed. The 749 model was a shrunken 999 model, but here’s the twist, many road tests from the day gave the 749 the nod over its bigger brother, the chassis struggled with the bigger power from the 999, the 749 engine never really bothered the steel trellis work.

The 749 quickly arrived with tweaks and new models like the 749R went someway to make up the stock bikes short comings.

This bike's been used, with 20,000 miles recorded it’s not going to be a minter, it does though look straight enough.

The seller informs us it’s been properly serviced, which is a positive start. If you want a sporty Ducati and aren’t too hung up on what model it is, could this be the answer to your prayers?

The ‘Dark’ model was the entry level, it had a drab grey paint job.