Harley's Sportster has survived more or less visually unchanged since around the time the dinosaurs died out. Why? well, partly because it looks great - pure, simple American metal. And partly because it's the most affordable and manageable way into H-D ownership, especially the smaller 883 version. But it's also a surprisingly capable and practical everyday bike in its own right. Despite looking the  same as ever, though, it has quietly evolved over the years, so we're going to take a look at a variety of ages and versions to suit all pockets. It's worth remembering that Harleys tend to hold their value very well, so whatever Sportster you choose, so long as you keep it nice, you won't lose out when you come to sell it on. 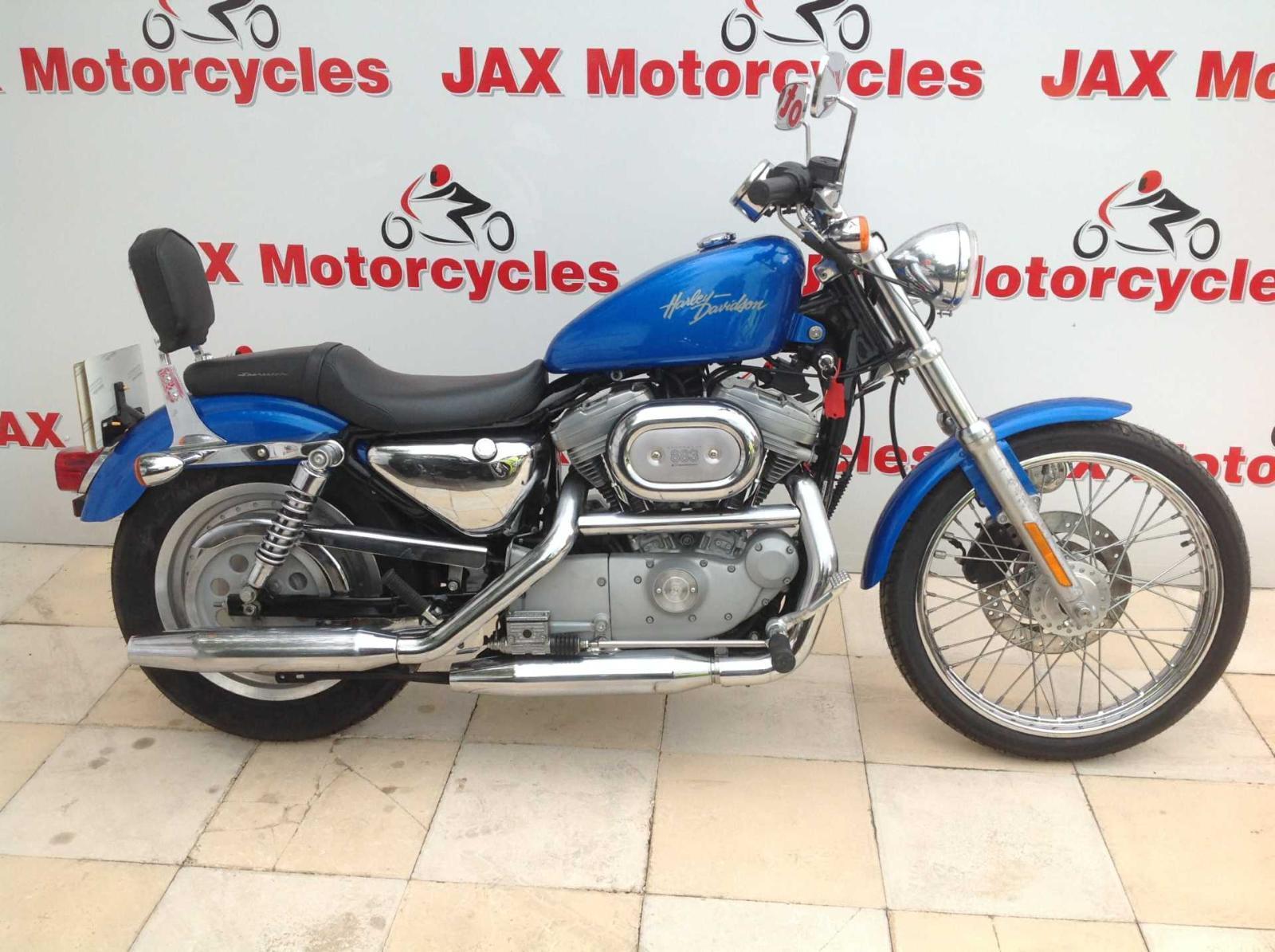 The 883 always used to be the entry level Harley (some say it still is - they don't count the Indian-built 500 and 750 models) and this is a perfect example. It's the Custom model, so it's got the larger front wheel and spoked wheels, and a pretty low stance (although not as low as the Hugger models, which have very little ground clearance and minimal rear wheel travel). You obviously don't have the grunt of a large Hog, but one of these little Piglets can stilll squeal pretty effectively on the right road. Surprisingly good round town, too - very easy to trickle along in first gear. This one is clean, pretty much standard and has less than 8000 miles on its shiny clock. It's belt drive, like all 1993- and later Sportsters, but as it was built in 2002 it's still got the old direct mount engine, which means it will vibrate a lot more than the 2004-on rubber mounted version. Some people like that... 2004 bikes also got various performance related engine mods, which make quite a difference to smoothness and delivery, but then 2004-on bikes are a bit more priecy as a result. This looks like a good, affordable starter Harley - we'd want to check for rattles (they always rattle a bit at start-up due to the hydraulic tappets but that should go away as soon as it's warm) smoke and leaks, as well as general condition - low mileage doesn't always mean well cared-for. 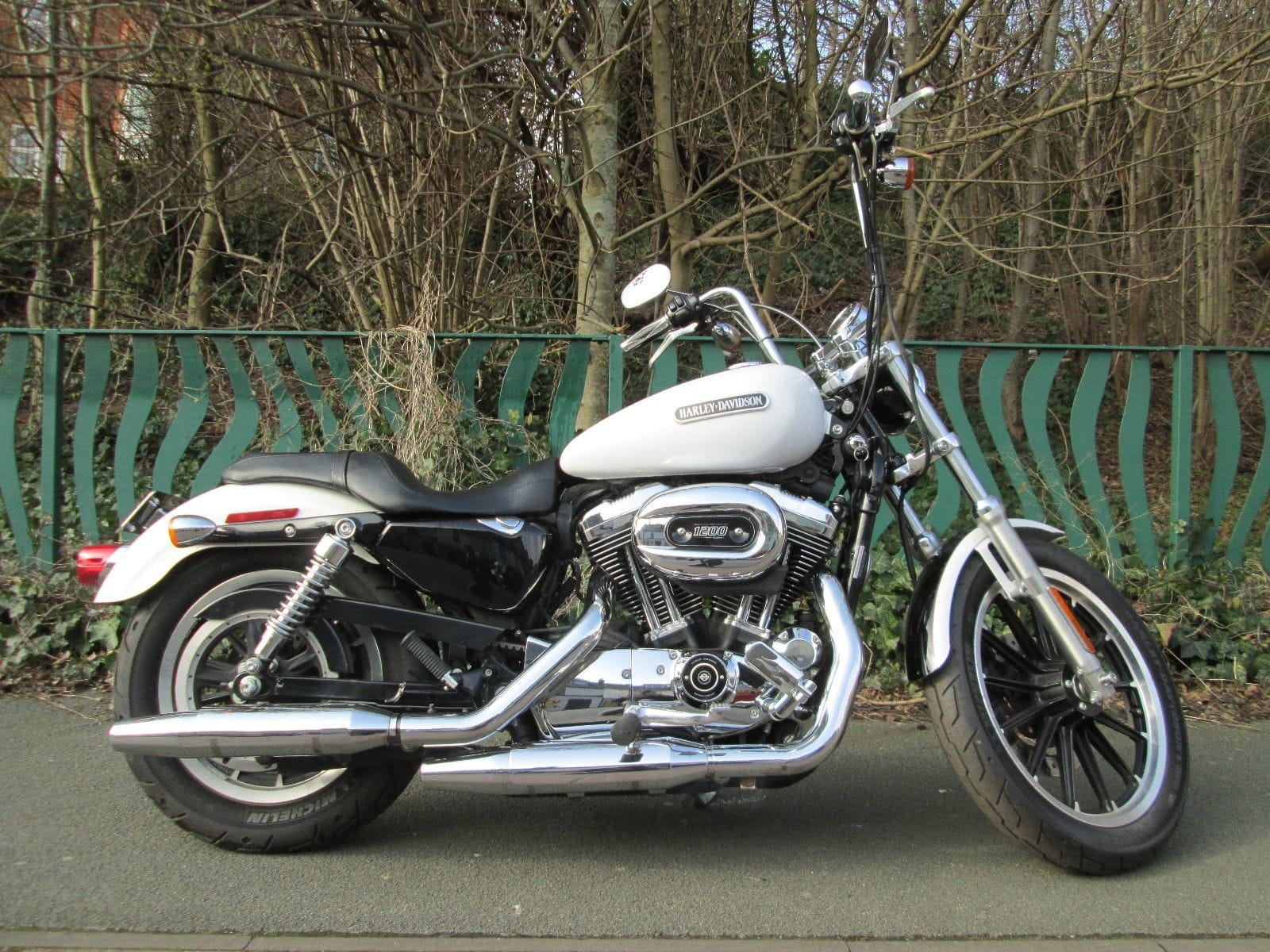 This Sportster really hits the sweet spot - old enough for the price to have bottomed out nicely (especially as this is a recent import from the US, so perhaps worth a little less than a UK-spec model), but new enough to have the later (and smoother) rubber mounted engine and lighter frame, as well as fuel injection and built-in immobiliser. It's the Low model, so ground clearance will be limited, but it's set up as a cruiser anyway, with forward controls, extra low seat and and high pull-back bars, so unlikely to attract too many trackday addicts. Unless you really like punishing your spine and ventilating your armpits though, we'd suggest a move back to standard bars wouldn't be bad idea, although you'd also have to change the cables - these have been changed to suit. Otherwise it's got cast wheels, which might detract from the classic look a bit, but they're a hell of a lot easier to look after. 12,000 miles is barely run-in for one of these engines, so we wouldn't be expecting any problems in that direction - always worth insisting on a cold start though, to check for smoke and rattles. It's got a couple of chips in the paint apparently, and a scuffed indicator - worth pricing up the replacement part so you don't get a nasty surprise. Tyres are said to be good, but we'd want to check the date code - wouldn't be surprised if it's on the originals and they'll be rock hard by now. It's got an MoT til next february. Normally we'd angle for a new MoT as part of the deal, but then that means you have the next one due mid-summer, so best to leave it as it is and get it done out of season. 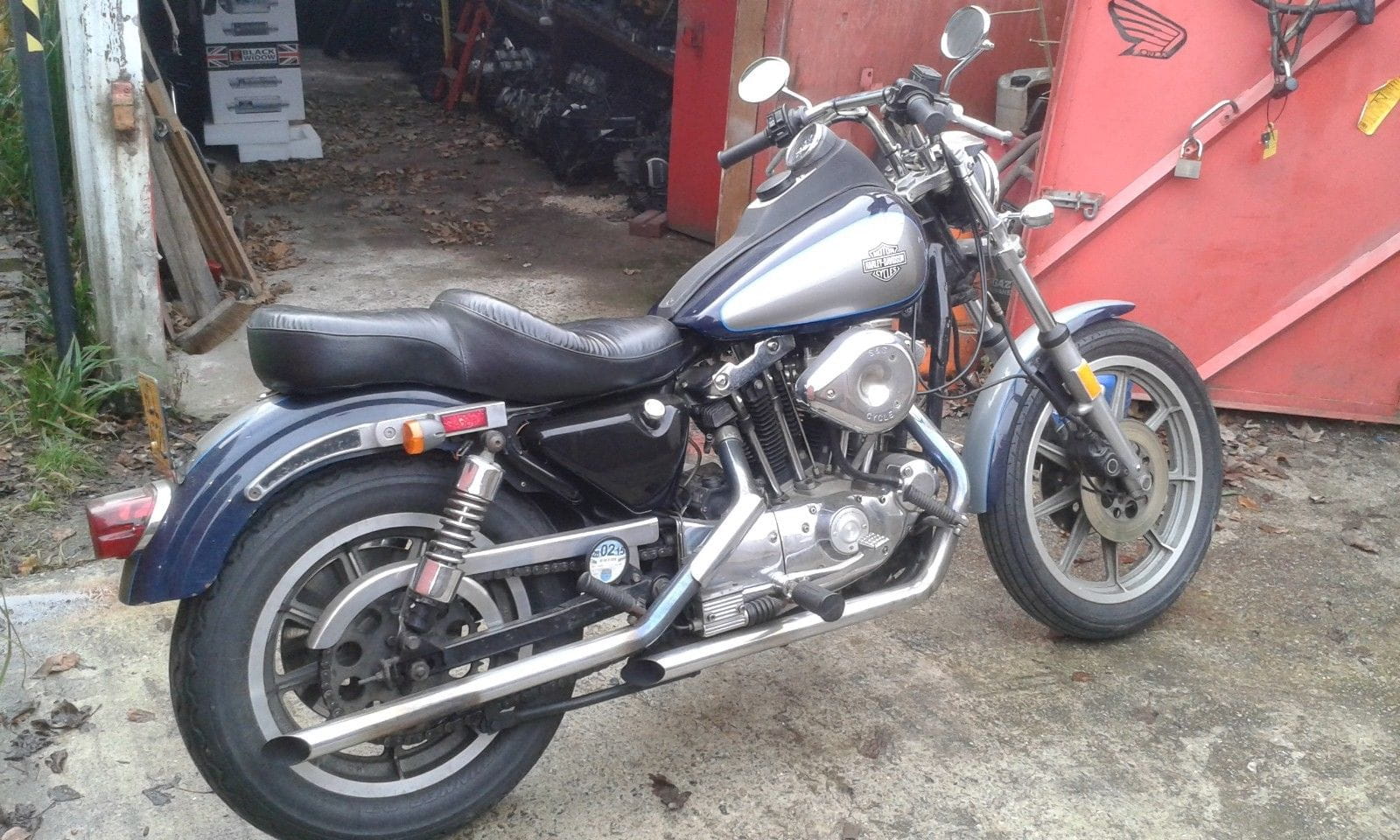 If you're looking for authenticity, look no further. This American import (well, they're all American imports, obviously, but this one started its life on the road in North Carolina before being brought to the UK) has the old-style Ironhead engine. That means it's a fair bit more vibratory and mechanically noisy than the later Evolution engine that was fitted from 1986 (and a LOT more vibey than the later rubber-mounted version). It also means it has the four-speed gearbox, and it's undergeared as standard - worth going up a tooth or two on the front sprocket (it's chain drive, not the later belt drive) for more relaxed cruising. The tank doesn't look very Sportster, but this is the XLS Roadster model, so it has the larger (about 15 litre) fuel tank with the centre console, rather than the titchy peanut tank that was fitted to earlier models. Amazingly for the age of the bike, it has just 8000 miles on the clocks, and looks to be pretty much completely standard, so hopefully it will be spared the reliability issues of some higher mileage or more modified versions of these engines. You do need to realise, though, that this is essentially a 1950s engine, so you need to keep on top of maintenance and adjustments if you want to keep it running sweetly. Oh, and use plenty of Loctite on all fasteners, especially anything to do with the charging system. 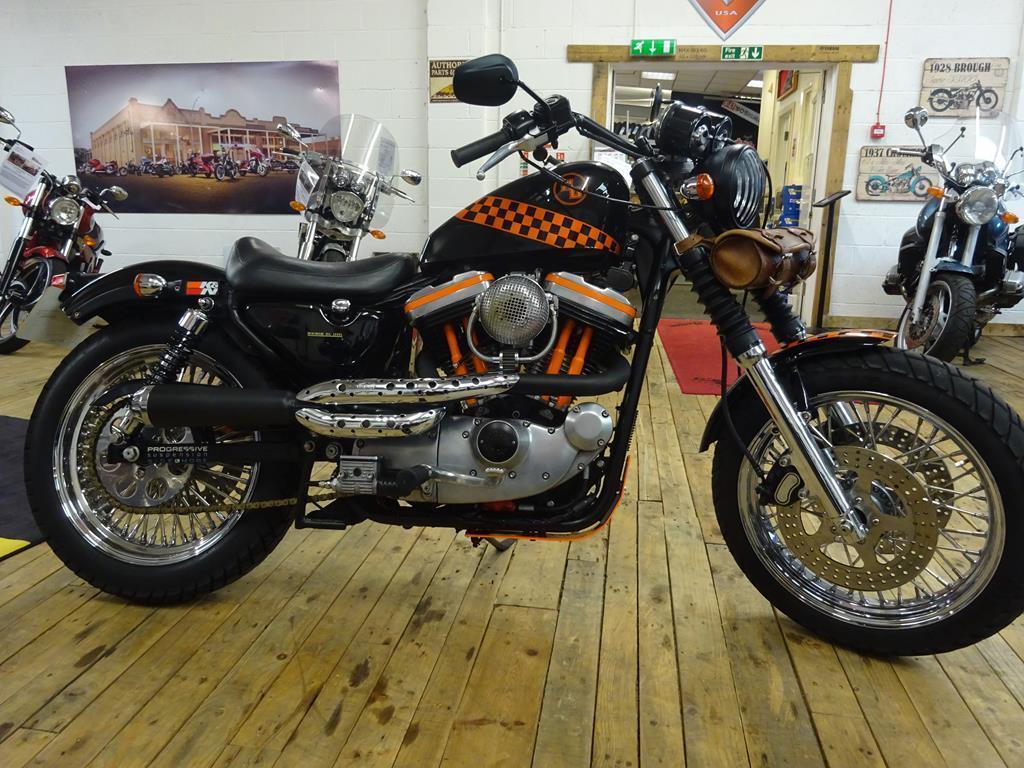 This one stands as an example of just what can happen when you get carried away with an accessories catalogue and a credit card. The sellers (Moore-Speed in Dorset) say that thousands have been spent, and from the extensive list of modifications we're not surprised. It started life over 20 years ago as a standard 883 Sportster, but there's not a lot left standard now. It's been rebuilt as 1200cc and heavily tuned, the frame's been completely refinished as has virtually every other component and there's a list as long as your arm of posh bolt-on bits including new wheels and a Vance and Hines exhaust system. Mileage on the clock is over 37,000 but the clocks aren't original so it could be more, could be less. Sort of irrelevant anyway, really, given the extensive reworking. We'd want to be looking for evidence that the work's been done properly - that things fit as they should, no shonky over-long bolts or nasty untidy wiring tucked just out of sight, no oil leaks or wobbles. Otherwise, if the previous owner's vision of the ultimate Sportster chimes in with yours, it could be a good buy - certainly cheaper than trying to build something to the same standard from scratch. 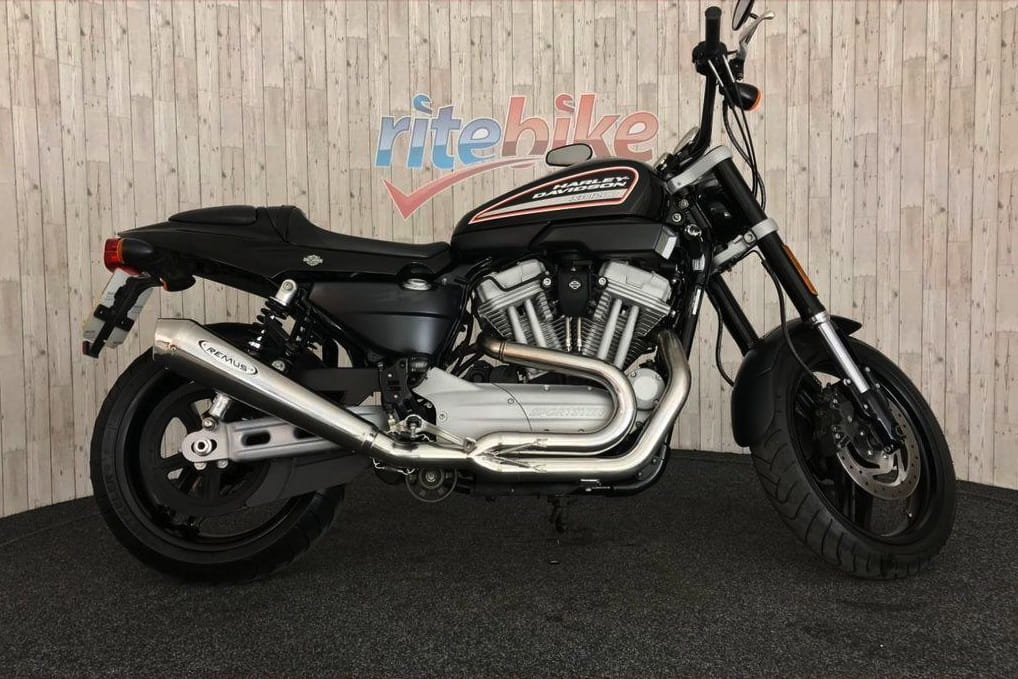 OK, we admit it - this isn't really a Sportster - or least not what a traditional Harley fan would call a Sportster. It's the XR1200, created to answer a perceived demand for a Harley that handled, exclusively for the European market, and based round a Sportster engine with the same sort of performance upgrades as in the Buell sportsbikes. And it worked - these things really can hustle on a back road, and have enough power to be fun in the bends - they even ran a one-make race series for them. Eventually the ground clearance runs out, but by that time you're at the limits of the tyres anyway, so it's a good balance for real-world performance and handling. Not a lot of fun on motorways, but hey, you can't have everything. Problems? Mechanically they're very strong - oil leaks are common though. The finish isn't the best and if neglected you will be left with a lot of furry alloy and flakey paint. The biggy, though, is original plastic petrol tanks swelling after prolonged contact with modern ethanol-rich fuel. A revised tank was fitted on later models and has been fitted under warranty on many earlier bikes like this. We'd want to check this one carefully to make sure the tank fits and doesn't distort the covering panels. Apart from that, compared to 'proper' Sportsters they're not very shiny, so if that's what floats your boat about an H-D, then this probably isn't going to do it for you. This one suffers further from being in rather boring black - they look best in orange flat-track replica livery - but don't let that put you off. It's relatively low mileage at just over 17k, has a Remus full exhaust system that tucks out of the ay even better than the original, and looks very clean and original. Comes with 12 months MoT as well.