No, you'll never use that top speed, but yes, you really, really owe it to yourself to own one of these at least once in your life. The mania for enormous top speeds came to a head among the Japanese factories in the late 90s, when first Honda specifically stated they'd designed their new CBR1100XX Super Blackbird to top 300km/h (180+ mph) and then Suzuki took the bait with the 1998 Hayabusa - taking its name from a falcon which eats blackbirds... Kawasaki jumped in with the ZX-12R and later the ZZR1400, and battle was joined. After a while everyone calmed down, stopped trumpeting top speeds and softened the edges of their revised models. Now we could get on with ignoring the ridiculous speed figures and revelling in the huge midrange torque and real-world acceleration provided by those inflated engines. Because you're never thrashing them, reliability's not a problem, economy's not too bad and with relatively low purchase prices, running an older hyperbike can make a surprising amount of sense (whoever ssaid, 'what about tyres...' can go and stand in the corner...). You will need a bit of self-control if you want to keep your licence though. 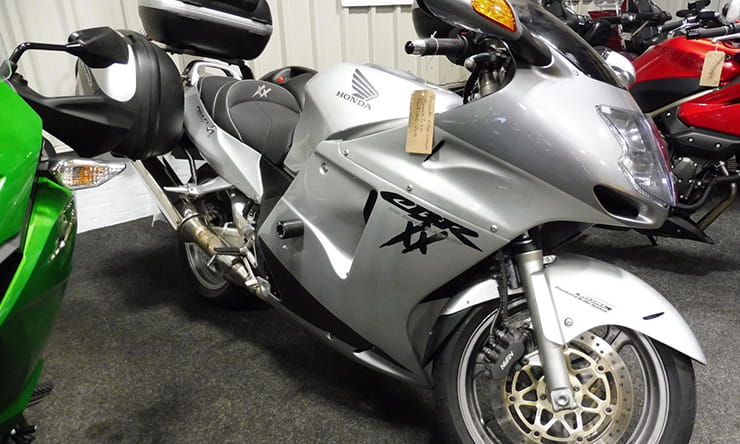 The bike that started it all - super-fast, sweet-handling, but refined and comfortable solo or two-up. This is the very last model of Blackbird, so it's got fuel injection, linked brakes (make sure you check all seals for leaks and linkages for free play - there are lots of them), catalytic converter, digital dash and.. not a lot else in the way of standard gadgets. This particular one does come with a complete set of quality luggage though, as well as a comfy aftermarket seat, and looks very clean. At 25,000 miles it's barely run in - we know of Blackbirds that have done ten times that! They really are very reliable - only the camchain tensioners give trouble, but there's an upgraded version available that you can fit and forget. One oddity - don't use posh full-synthetic oil in one of these. They don't like it - increased oil consumption, smoke and clutch slip can be the result. Stick to mineral or semi-synth instead. Otherwise, the suspension will be in need of a refresh, especially the rear shock - a proper rebuild with new oil and seals and it'll last another 25-30,000 miles. Worth adding a 6mm spacer under the top shock mount while you're at it, for sharper steering and better ground clearance. Otherwise it's mostly the same stuff you'd want to check out on any used bike of this age - bearings, tyres, chain and sprockets, general condition. It's well worth working through the wiring loom to clean and protect all connections, and invest in an upgraded regulator/rectifier - the originals are known to give trouble. Owners love them and tend to hang on to them, so they hold their value well - buy a good one, keep it nice and you won't lose money if you sell it later. 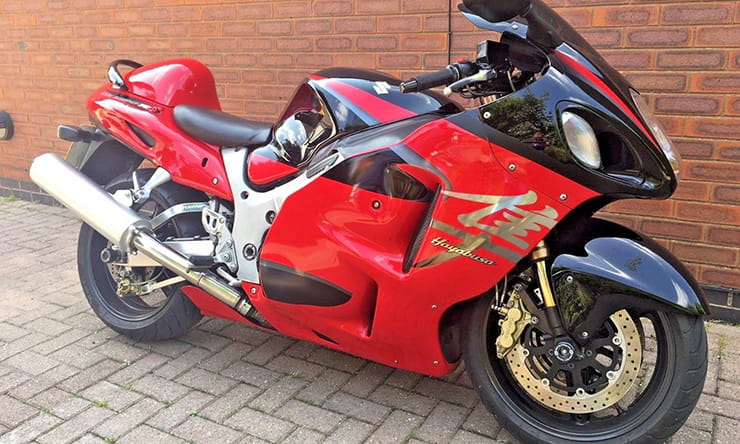 If the Blackbird started the war, the 1999 Hayabusa pushed the nuclear button. With a genuine 160bhp at the rear wheel, excellent handling and complete high speed stability, it stamped its authority on the class from day one, clocking 190-odd mph and destroying the dragstrip with low 10-second standing quarters. True, the looks weren't to everyone's taste, but the aerodynamics really worked. There were very few changes from 1999 to 2007, when it was completely revised, but post 2002 bikes - like this 2005 model on sale in Blackpool - had an uprated clutch and starter motor, which is worth having. Major problems are few - the engines are tough as old boots so you needn't worry about the 41k miles on this nice, clean, standard example's clocks. You're more likely to find problems with ageing electrics than anything major. Poor running can be down to fuel starvation from failing fuel lines, which collapse, restricting fuel flow between tank and pump. Fuel pump failure is a known issue too, usually down to neglect - keep the filters clean and you shouldn't have any trouble. Clutch slave cylinders are a known weak point - they can flex and crack. Let it get too bad and you risk damaging the crankcases. Brakes can be a bit challenged by the bike's weight and speed - uprated brake pads are a wise move, along with braided hoses, but you really need to strip and clean the calipers regularly as well, and be extremely meticulous about bleeding the system. You can fit Bandit 1200 six-piston calipers, but they're actually no more effective than the original four-pots. Suspension linkages need regular greasing, which is often neglected - makes a big difference to handling. And you need to check that all the suspension damping adjusters work as they should - they have a habit of sticking solid. Otherwise the main thing you need to prepare for is the Hayabusa's appetite for rear tyres. If you're even slightly enthusiastic with the throttle you can get through a sporty rear in a couple of thousand miles. Smart owners use a sticky front and a dual compound sports touring rear. 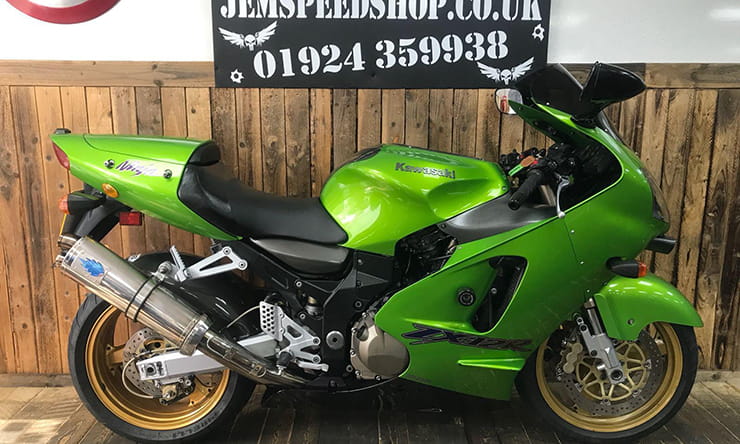 The ZX-12R offers a sportier take on the hyperbike theme - in fact it's more of a pumped-up sportsbike than a true hyperbike. Based on an 1199cc inline four with an innovative monocoque frame that also doubles as an airbox for the Ram Air system, it made a claimed 175bhp (closer to 160bhp at the rear wheel, but still plenty) with a big fat torque curve that peaked at a lowly 7500rpm. That meant that yes, you could have huge top speed, but you also got to enjoy turbine-like acceleration from low revs in the world. Although it looks extreme and sporty, that's deceptive - it's actually much roomier and more comfortable than most pure sportsbikes, and makes a great sports tourer. This clean, relatively low mileage (it's only covered an average of 1000 miles a year since new) version has few useful extras, like the Blue Flame exhaust, double bubble screen and carbon hugger, but has otherwise not been mucked about with. It's the original model, so it doesn't have the better forks and upgraded Ram Air (2002) or radial brakes (2004) of later models, but you won't notice that on a day to day basis. We'd want to have a proper test ride so we could see if the fuelling's been sorted to suit the new exhaust - the early ZX-12Rs were prone to a bit of low-rpm surging and occasionally stalling, and that was made worse with some aftermarket cans. It's HPI clear, which is good, but we'd still check carefully for any evidence of paint cracking around frame welds - the frame's made from cast and extruded sections welded together and any damage to the cast parts spells curtains for the frame - straightening it is likely to cause failure. Another particular issue with these early models is charging system failure due to oil from the alternator being forced up the wires to the connector before the regulator/rectifier. This can cause a short circuit, and potential burning, so check the connector for oil contamination. Oh, green ones are fastest, of course. 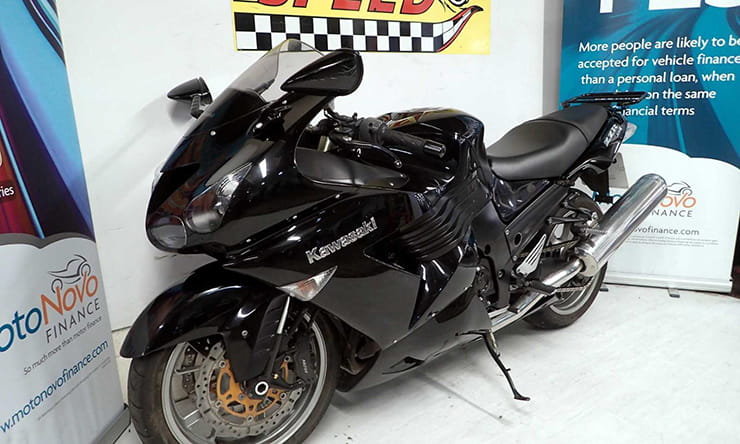 Although Kawasaki pitched in early with the ZX-12R, it wasn't til 2006 that they really committed to the hyperbike battle with the ZZR1400. Prior to that they'd relied on the ageing ZZ-R1100 and then the stop-gap ZZ-R1200 to offer that combination of outrageous speed and relative comfort that Honda and Suzuki had made their own. It was worth waiting for - the ZZR14 combined a sledgehammer of a motor with a stable, smooth-steering chassis, slippery fairing and a pretty sporty riding position. Add panniers and it's a two-up tourer, take them off and it's at home on a fast racetrack.

As with the rest of these bikes, major mechanical woes are pretty much unheard-of, even on a relatively high mileage example like this one, which is showing 55k miles but looks pretty clean and tidy. So you need to look elsewhere for potential problems. Warped brake discs are an extremely common problem, especially if the brakes have been used hard from stone cold, so watch out for juddering on your test ride. The front suspension's a bit harsh as standard, but that can be sorted. The rear shock's a bit cheap and nasty though, with no remote preload adjuster - a decent aftermarket shock is a sign of a clued-up former owner. Kawasaki never greased the linkages and head bearings properly at the factory either – budget for that little job ASAP, especially on a low mileage bike that might not have had it done yet. The ZZR is a bit sensitive to tyres - some combinations leave the front feeling a bit vague, and inclined to wobble a bit under certain circumstances (nothing alarming, just annoying). Michelin and Dunlop seem to the favourites with owners, and tyre wear's surprisingly good - you can expect 5-6000 miles from a pair of sports touring tyres unless you're really hammering the throttle.

Taller riders might find the riding position a bit cramped - especially the peg to seat relationship. You can buy an aftermarket seat or have the original re-upholstered, but a sneaky tip is to track down a standard seat from a GTR1400 - swap a couple of brackets over and it fits straight on. Otherwise the main thing to look for is condition - if it's been looked after, it should be shiny and clean, even under the skin. But corroded nuts and bolts, and major furring of engine cases, forks and wheels, is evidence of neglect and ought to set alarm bells ringing. 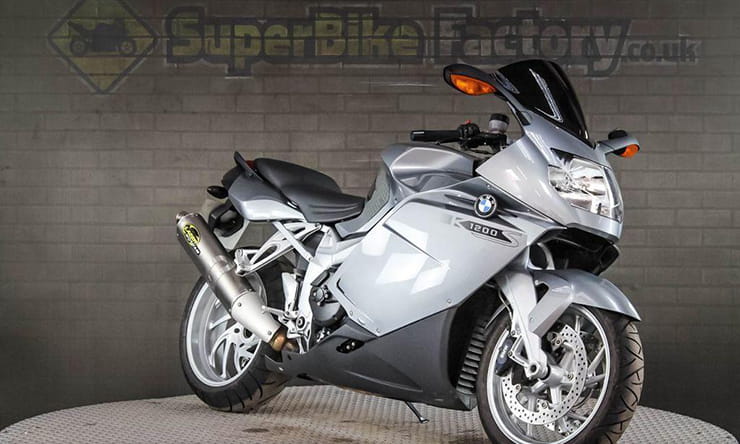 BMW cheated a bit with the K1200S by not really caring about the top speed - they realised that most owners never visit those rarefied heights anyway, so why build the bike around that? The K's inline four engine was built with lessons from the firm's formula one effort firmly in mind, and it's a revvy, eager beast that can't match the competition in terms of pure power - although a claimed 165bhp isn't to be sniffed at - but which makes up for that with real-world usefulness. It helps that it doesn't need to be geared for 200mph, so it can run lower gearing for better throttle response on the road.

This one, on sale at Superbike Factory in Macclesfield, has 28k miles showing - nothing for one of these, although we'd want to see evidence of a proper BMW service history, for its early years at least - that way you know any recalls and service bulletins have been addressed properly. From the photos it looks clean as a whistle, although you should always take digital photos with a pinch of salt - even if they've not been tweaked, they always flatter the bike's condition. Early K12s could suffer from camchain and tensioner problems, with some engines skipping a tooth on the cam sprockets if abused. But otherwise the engines are bulletproof. They do produce a fair bit of high pitched vibration though, which some riders can't stand. The gearbox will be a bit clunky - they're all like that sir... The only real weak point is the clutch, which had a vague action on early models, and was prone to slipping. The Hossack-inspired front end works well, and it's astoundingly stable under hard braking. But you do need to check for play/wear in the ball joints - they are a sod to change without damaging the wishbones. One other thing to be aware of: most of the major electronic components are coded to the bike and to each other. That means potential problems if something fails and you need to replace it. New parts can be coded appropriately, but used parts often can't...