Once the king of brutal power and race-like handling, the GSX-R1000’s 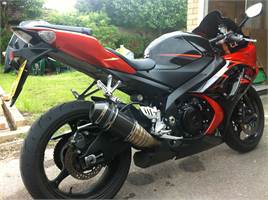 performance teeth have worn over the years. This is especially true when comparing a seven-year-old machine to the likes of today’s BMW S 1000 RR and Kawasaki ZX-10R.This is not to say the big-bore sports Suzuki isn’t able to compete… because it can. It’s only at trackdays where the GSX-R’s lazier steering and shade less power will come into focus. Even so, a competent rider on a GSX-R isn’t likely to be worried about some upstart from BMW Motorrad. As a road bike, the GSX-R is marginally less intense to ride fast than the latest tackle, which means it makes for a very good road bike. In 2007, the bike press loved the K7 for its ability to be ridden fast without taxing the rider. Because it has a claimed 162bhp and comes with an electronic steering damper, selectable power modes, slipper clutch and decent suspension, the K7 GSX-R is still a mighty impressive tool. It was designed to carve up roads and this is exactly what it does – with ease.