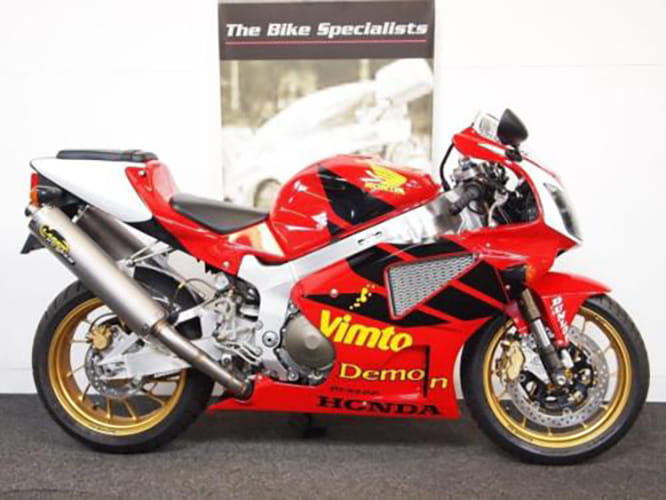 It’s the year 2000, we’ve survived the millennium bug and a whole new decade of motorcycling beckons. With the old marketing philosophy  of win on a Sunday, sell on a Monday still alive Honda gave up on trying to compete with a 750cc in World Super Bikes and went for a V twin litre machine to spearhead its campaign for the Y2K season. The SP1 was born. The race bike went on, did the business, Colin Edwards won the WSB crown and the rest was history.

Honda UK sold their quota of bikes with ease, but 26 machines were sent to RS Performance for a bit of a makeover. The bikes were commissioned by Tippets, a Honda dealer in Surbiton, Surrey.

The spruce up was mostly cosmetic. Things like lightweight OZ racing wheels, a WP rear shock absorber and a numbered plaque attached to the top yoke. The only nods to performance was a Laser exhaust system and a Power Commander, which helped to take the quoted BHP up to 130 from the stock machines 124 galloping horses.

The bike was called the Joey Dunlop tribute bike. With a list price of just over £14,000 in 2002 it was one for the collectors. A collector clearly bought this example. Like a stuffed animal its been living inside a glass case for over 14 years. With an asking price of just under £22,000 this trinket ladened road bike is never going to get in the wrong hands, which is both a good and bad thing for this rare beast. 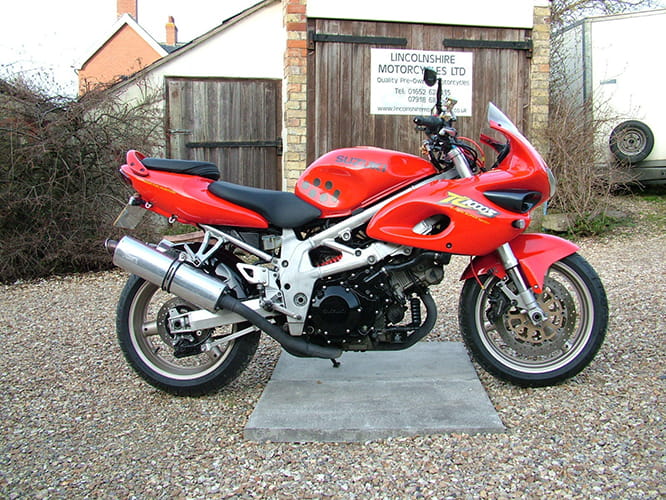 It’s often the case that a motorcycle that handles poorly will earn itself a reputation. In the 70s bikes like the Kawasaki H2 750 weaved their way into the hearts of riders who struggled to keep the thing in a straight line. In the 80s things got better, improvements in chassis design and tyre technology helping motorcycles to become more rider friendly. Even then the manufacturers could create a machine that swerved around and the Suzuki GSX-R1100K Slingshot immediately springs to mind. Suzuki were at it again in the 90s with the TL1000S. The TL1000S arrived into the the Suzuki range out of nowhere, it quickly emerged that the suspension was seriously out of its depths. The rotary rear damping suspension unit wasn’t one of the better ideas from within the Suzuki factory. The rest of the TL was more than up for a fight with the VTR1000 Firestorm that Honda had lined up against it. Neither of them though had a chance of stealing sales from the Ducati 916.

The TL1000S made a terrible track bike, but that didn’t really matter as on the road it was a very different story. Its punchy v twin motor delivered many smiles per hour. This example is a good representation of what your average TL1000S looks like these days. The red ones look dead smart, only the black models beat it, the British racing green ones look awkward. This offering is fitted with a few modifications.The flat handlebar conversion might not be to everyones taste, but you probably wouldn’t say that if you rode it? There’s some aftermarket exhaust cans that will allow the noise of the big twin to boom out. The TL is one of those machines that’s got a bit of a cult following now, and the bad handling is actually one its attractions, it’s a funny old world isn’t it? 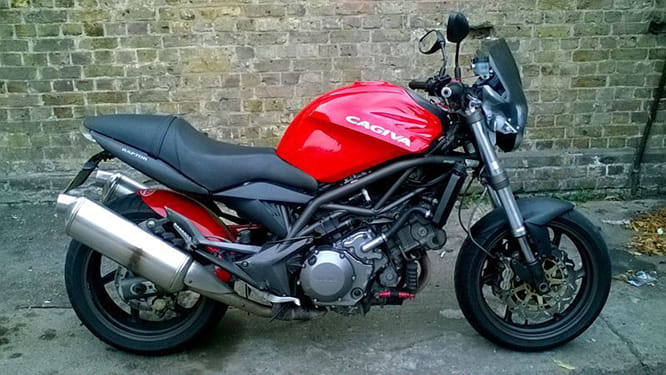 Cagiva, it’s one of those marques that’s never really appealed to me. Their range of bikes have never spoken my language. This Raptor is exactly the point I’m trying to make.

The styling, it’s not the sharpest looking bike to ever leap off a drawing board. Even the name is uninspiring, isn’t there a dinosaur called a Raptor? The Cagiva brand by rights could have died out years ago, but somehow it continues to pump out dull machines. The heart of the bike is from another mother, the Suzuki TL1000S engine isn’t even enough to spike my interest. On the plus side, if you do ever wake up wanting to put a Raptor in your life you’ll be in a queue of one, therefore prices are quite reasonable. This bike is up for less than £2,500 and it’s covered 19,000 miles in its 14 years roaming the planet. It looks pretty honest too, if not overly exciting. There’s never been that much love for this model and reviews reveal it’s not actually a bad motorcycle, just not really a good one.

Any of these take your fancy?  or !