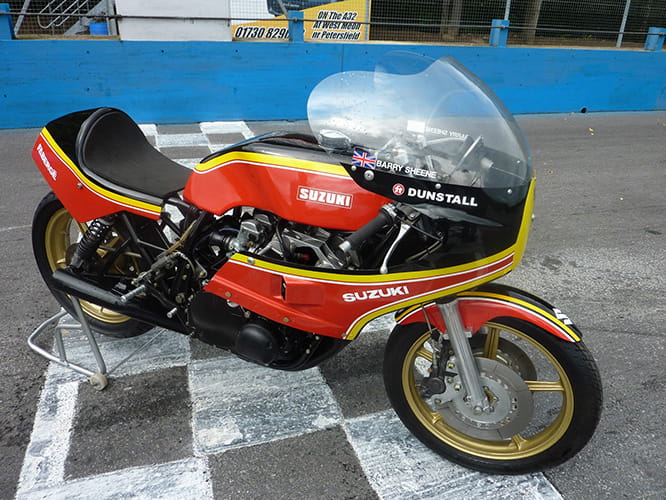 The legacy that Barry Sheene left behind is probably more on trend now than it’s ever been. Nostalgia, if only we could bottle it and splash it all over.

At times it feels like that there are more ex Sheene machines in circulation today than actually really existed, without provenance an ex race bike could’ve been raced by anyone. This Dunstall Suzuki was raced by Mr Sheene in 1979, on a balmy bank holiday August weekend he wrestled the GS1000 powered beast to a 2nd place, only beaten by Ron Haslam, pretty good going when you remember Sheene’s loathing of four stroke race bikes, he once referred to them being “muck spreaders”. This bike had came about after Suzuki had approached a bloke in Kent, he was one of many at the time along with Harris and Spondon crafting hand built aftermarket frames to help tame the power that Japanese engines were capable of putting out.

This bike is now fully restored and up for grabs, it’s an interesting machine, with a price tag of £39,995 it’s forever home will probably be with a hardcore Suzuki collector. In this age of the race replica you could actually own a real racer that’s got a smidgen of that Sheene legacy in its soul. 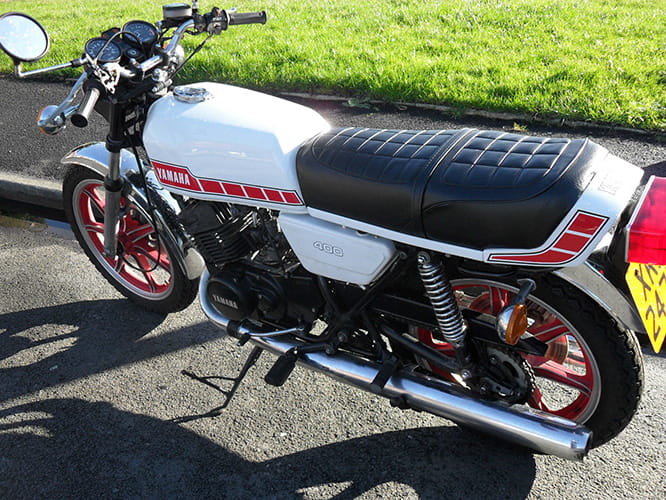 The spirit of the 70s, it is summed up in this Yamaha RD400. Yamaha know a thing or three about two stroke motorcycles, and despite Kawasaki and Suzuki building wacky three cylinder two strokes at the time Yamaha kept with the two’s company approach.

The RD400 was a bad boys bike, they took the TZ dna from the race track and delivered it to the Yamaha dealer down the road. Even when the RD350LC came along, there were plenty of owners who kept the air cooled faith.

This example is how you’d like to find one. It’s only had one previous owner and looks like it’s had a lazy life, the fact it was unused for years adds to its lure. A few years ago people who unearth finds like this quite regular, the forgotten bike in the back of the shed. Too often these finds get restored or messed with, for me that’s a shame. There’s already too many restored RD400s in the world for me. It would be much cooler to go down the route of the sympathetic restoration, make it safe, repair rather than replace any parts that need sorting. Parts for the RD range are plentiful, unmolested examples of one of the iconic bikes from the 70s Yamaha range aren’t. Interest in this bike will be far and wide, I hope the bad boy bike goes to a good home. 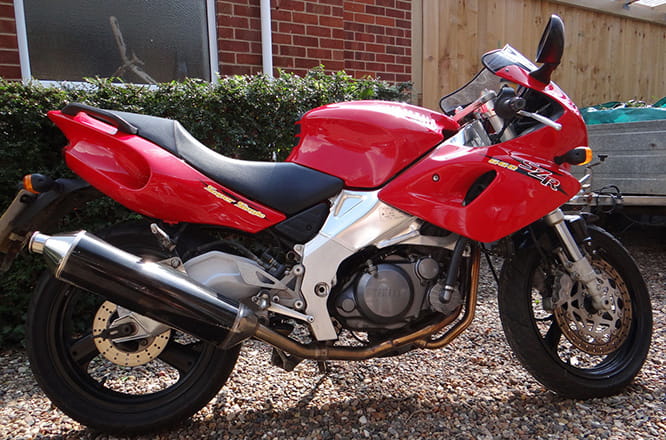 The single life, it’s meant to be fun, so why did the Yamaha SZR660 struggle to make a good impression when it was born in 1996?

On paper it should’ve been a hit. The frame is a Deltabox alloy unit, like that used on many Yamaha sports bikes, from the original FZR1000 EXUP to the pinnacle of FZR’ness the OW01. The chassis had Paoli upside down forks and three spoke 17 inch rims at each end. That’s were the good news ends. Powering the ‘sports’ single was a water cooled four stroke, it put out just over 40BHP, and at almost a 160 kilos in weight you don’t need to be Carol Vorderman to work out it was a mismatch of stats. The real issue though was and still is the looks, I can’t imagine anyone ever pulling up on their SZR, getting off and then looking back at it whilst walking away.

It’s like an Adele song, there’s not a single line of the bike that makes you smile.

This example is a decent one, it’s got low mileage and if you like a slow quirky motorcycle you needn’t look any further. Prices for these one lungers have never been steep, and rarely would there be two people interested in the one bike? Maybe that’s why it’s listed on eBay with a buy it now price, after all it takes two people to make an auction.

Any of these take your fancy?!