In the 80's and 90's Kawasaki was the leader when it came to large capacity high speed sportsbikes. Iconic bikes like the GPz900r and GPz1000 ushered in the 150mph era and the battle for market supremacy that ensued. today we take a look at three examples from the online auctions. 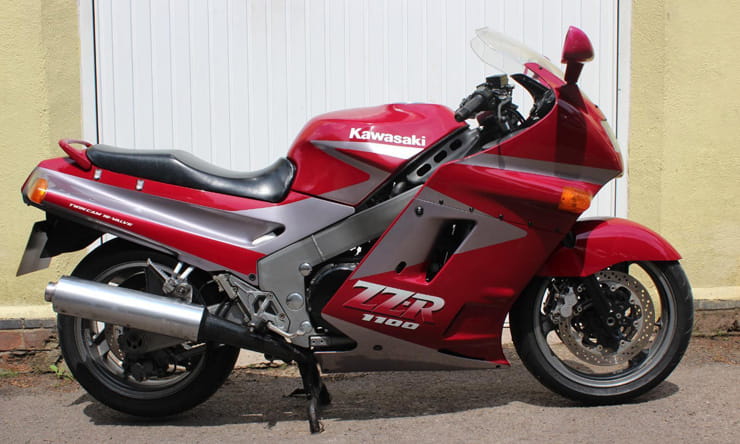 Throughout the 1980s the Japanese manufacturers fell over each other trying to build the fastest production road bike, they all had a stab at the job with varying results. As we know, history is written by the winners, so Kawasaki are the ones to tell you how their ZZR1100 wore the crown as we entered the 1990s.

The water cooled inline-four cylinder engine nestled nicely inside the wrap around alloy beam frame. Straight lines and motorways were where it excelled while on the back roads and twisty bits it was less capable.

The ZZR1100 went on to get an update with the D model, mostly the same bike under the reworked styling and funky colours. There was another revamp before it was laid to rest, that was the rare ZZR1200 but it’s these early C models that are the darlings of the range. Looks-wise they’re not the prettiest machine Kawasaki ever built but those slippery lines helped it reach over 170mph.

Good examples are very hard to come by, so this restored model caught my eye. Adding to its attraction is the fact in over 25 years it’s only had 3 registered keepers. Details like this make me happy. There’s been much love shown to this bike and the advert reveals a lengthy list of parts that have replaced. So, with an asking price of £3,150 it’s not the cheapest ZZR1100C out there, but it is the probably the best.

• UK bikes were restricted with different carb tops, not that you’d be able to notice! 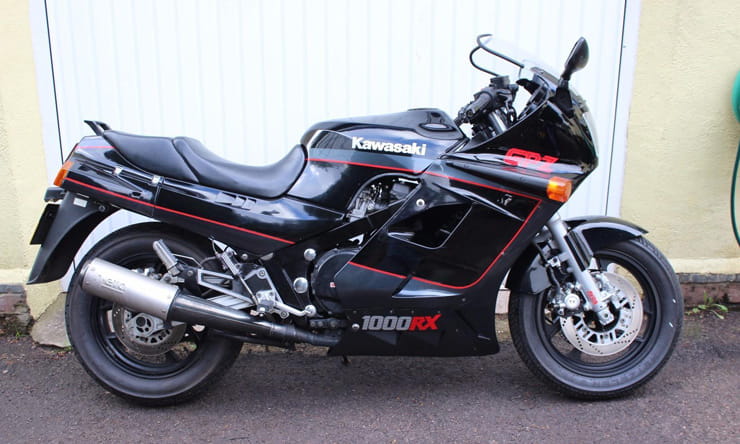 Kawasaki gave us the first 150mph street bike which was also comfy, looked good and even had a centre stand. Their GPz900R was a step towards the modern super bike. With sales booming Kawasaki tooled up and built its replacement but it wasn’t so well received. Let’s take a look why:

On paper the bike offered uses a bigger engine, this meant more power but it was the chassis was where it all went wrong. At each end there was a sixteen inch wheel, not one of the better ideas from Kawasaki. It wasn’t much of a looker either and time hasn’t been overly kind to it. These days it’s pretty much a forgotten model. Not too many survive, so if you do want one you’d do well to find a decent one.

This ticks the boxes for that criteria. In 30 years it’s had 3 owners and the first only had it a year, maybe he went back to a GPz900R? Another kept it for 28 years, hence its immaculate condition and low mileage. 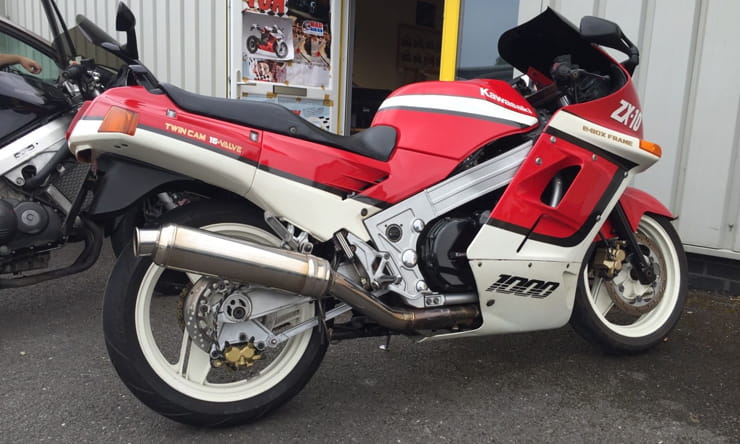 Having lost out with the GPz1000RX, Kawasaki set about making up lost ground. Their next flagship model was this, the ZX10. Gone was the steel frame of the RX and in came an all alloy item. Wheels returned to regular 17 inch items, so far so good.

Performance was also back on the agenda, it had the right ingredients for a sales success. The looks of the bike were way too conservative though, not even bold paint jobs could save it. It only lasted a short while and received no updates other than different colour options. Unlike the RX that has seen prices rally, the ZX10 is still very much in the bargain basement of motorcycling.

This red and white example is on the market for £1,495 - it looks straight and there’s even a brand new old stock fuel tank fitted. If cheap speed is your thing you might want to take a look.

• In the States the ZX10 was called the Tom Cat