Pick of the Ads: Good, Bad and Ugly - Italian Bikes

It's 'Two Grand Tuesday' and Scott Redmond has been searching the online auctions with a fictitious £2000 budget.

Today's Good, Bad and Ugly focuses on Italian bikes. For some, an Italian bike is all about passion and soul, for others they are unreliable, slow and expensive! Let us know which describes your experience of Italian bikes in the comments below. 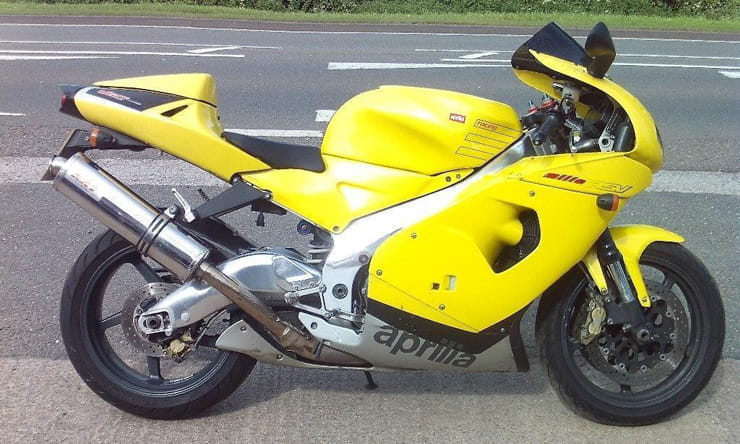 One day we’ll kick ourselves for not bagging an Aprilia RSV1000 when prices were so low; for less than £2000 you can put this Mille in your garage.

The RSV1000 is one of the best kept secrets on the emerging classic scene, and there’s still plenty of love out there for this old twin cylinder sports bike. It’s not all smiles though – owning any Italian bike that’s getting on for twenty years old can be a love/hate relationship at times; electrical issues are probably biggest area for misery. It’s okay though, as most gremlins can be fixed easily and fairly cheaply.

If you like your sportsbikes big then step this way – despite being slim thanks to that V-twin engine, the Mille is quite a lump. The looks are either your thing or they’re not, but the more common black finished bikes are less shouty than this one.

This bike is pretty much original, the obvious changes being the tinted screen and the fitment of a Power Commander. There’s a healthy stack of paper history that’s always handy to have, not just for now but also when prices mature, and details like this make collectors go that extra mile when haggling a price. 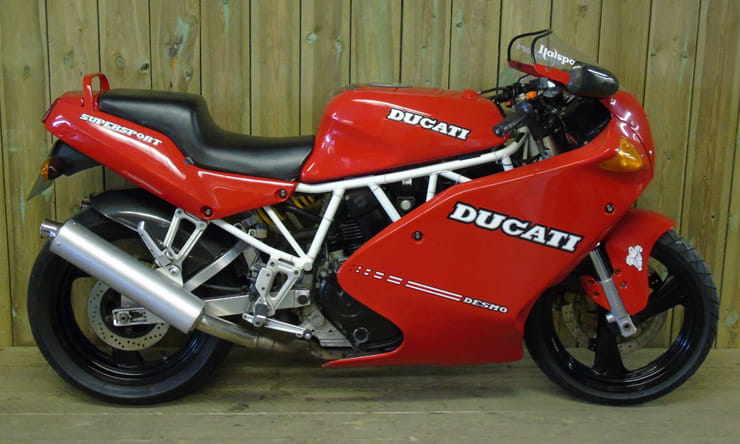 With all the weight of a 900SS and only the power a 750, it’s hard to understand why you would buy one of these if you wanted an air-cooled Ducati. There’s a big positive in this negative – the fact that prices for these 750 models are low. The untrained eye would be hard pushed to know if you were on a 900SS, but sadly that’s where the good news tails off.

Maintaining these bikes doesn’t come cheap, therefore the older they get, the less likely an owner is to fork out on big servicing bills. If you’ve got a stash of tools and some basic mechanical knowledge you could always tinker yourself. What really dents the appeal of these bikes is the cam-belts; it’s suggested that they’re changed every 8000 miles or two years, whatever comes first. Without paper history many potential punters will assume the worst and bid you down accordingly. This bike will require the belts doing – the seller is upfront about that – but it looks like it’s had an easy life, having been part of a collection for the last few years. Still, it’s been awaiting some TLC that hasn’t materialised, and at £1995, it’s at the ceiling of our £2000 budget. Chuck in getting her serviced and you’re looking at a good few hundred quid more. 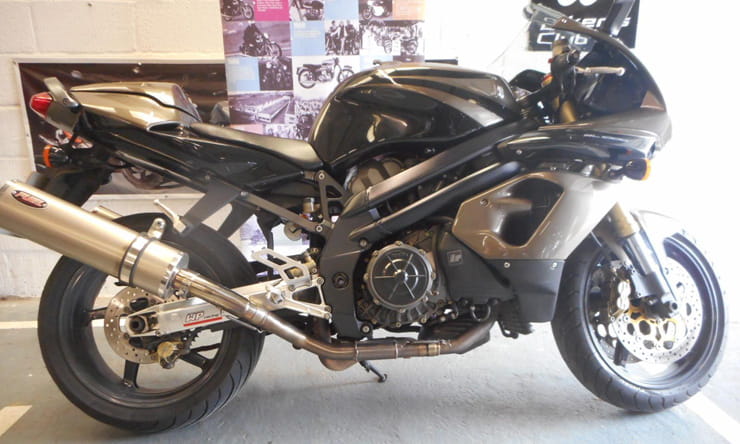 Taking an engine from one model and creating another around it is standard practice in the bike game, so it wasn’t too much of a surprise when Aprilia produced the Falco. Its target audience was those who wanted a bit more comfort than offered by the RSV1000 Mille, but looks wise the Falco was a bit confused. It hasn’t aged too well either. The thing is though, they are a great bike to ride, and those who own them rarely part with them.

That’s probably been the case here – this 2006 Falco is a one-owner bike, it’s therefore been well looked after and hides its 12 years really well. There are also a few quality add-ons to help whet your appetite. For less than £2000 there’s no better Italian machine on the market this week. If only it looked a bit more exciting.