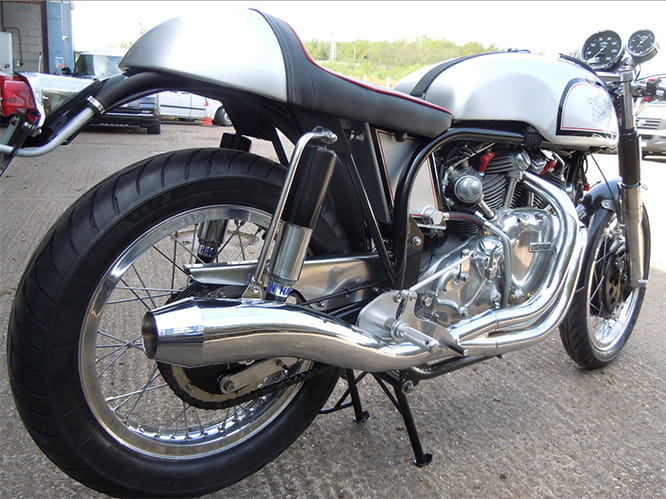 Without men in sheds in the 50s and 60s we might not have the cafe racer scene today, but to some of you that might not actually be a bad thing? Our forefathers took the heart from one machine and slung it in the chassis of other. There were various ways of going about this hybrid approach, but most of the better bikes shared one thing in common, that was the frame. The Norton featherbed frame is what you’ll find holding the best cafe racers of yesteryear together. With these original beasts now being over half a century old there was always going to be scope for manufacturers to cash in on the fame of the Norton frame.

This example is the daddy of cafe society. The Vincent v twin engine just about slots inside the metal tubes. This bike would’ve been top dog in its day.

First impressions are often misleading. If you thought that this Ogri looking machine was a restoration job you’d be wrong, as the whole machine including the engine is brand new.

The engine spec is impressive. From the twin plug heads to the carrillo racing con rods, this motor is built with performance in mind. The 67BHP quoted might sound tame to those of you used to riding Power Ranger race reps, but on a bike like this you’d feel every horse that gallops beneath you.

This isn’t an everyday bike, it’s a statement, a toy, and those with the biggest toys are the winners.

At £39,995 it’s a major outlay for a machine that’s basically a tribute to those genuine NorVins of years gone by, but if you wanted to create one of those in your shed these days you’d probably have to buy two iconic British machines to cut to bits.

The seller reminds any potential buyer that once the pain of purchase is forgotten the value is always with you, nicely put. 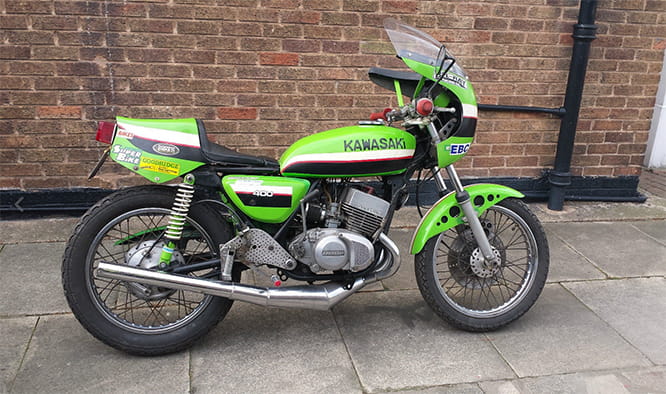 The fabric of an original cafe racer would be a single or twin cylinder British four stroke engine. This gave way to everything from v twins to multi cylinder configurations in later years originating from countries much further afield.

The 70s were a great time to be alive if you liked two stroke machines, the Japanese manufacturers built thousands of the things. Kawasaki had a whole range of three cylinder strokers, ranging from the learner legal KH250 right up to the legendary H2 750.

Somewhere in the middle was the KH400. This KH400 is fresh to market, it last got used in anger in 1989, since then it’s been lounging about in a garage doing sweet FA. For a two stroke that isn’t a good thing, the seals inside the engine will need replacing, that means a full strip down. The funny thing is this bike is probably more trendy now than at anytime in its 36 year life. The cafe racer scene is where it’s at, and two strokes have never been cooler, the stars have aligned for this triple cylinder green meanie.

The exhaust looks hideous. The rear sets look like something your dad would’ve knocked up in his shed, although the thing is they both add to the charm of this refugee from the 80s.

Bidding looks fierce already at over a grand with plenty of days left to run, whoever buys it let’s hope they don’t stick it in a garage for another couple of decades. 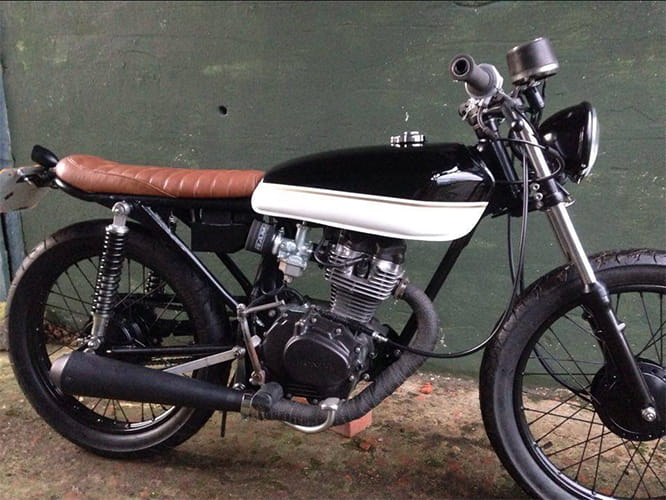 There’s a saying that you can’t polish a turd, but you can sprinkle it in glitter. This little CG125 is a very good example of that little analogy.

The CG125 isn’t an obvious choice for the cafe racer treatment, and after chewing this over inside my swede I am still non the wiser why anyone would shovel around £2,500 into building a special around the humble CG? On the plus side, if you do really want a pimped up CG125 in your life you'd probably struggle to find one that’s had this level of intention. It’s been totally stripped and rebuilt. The list of new parts is easily longer than the queue of potential punters lining up to rehome this dinky Honda. The check list of cafe racer essentials has been ticked off one by one, right down to the brown saddle. It’s not a real cafe racer unless there’s some beige going down somewhere. The glitter will in time fade, and when it does I feel all that’ll be left will be a pile of pooh. Money can buy you most things, except taste.