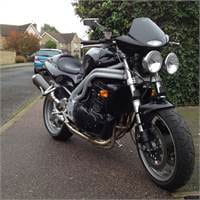 Triumph’s Speed Triple is a naked street-sports motorcycle that is often described as a streetfighter because of its lack of bodywork and the fitment of twin ‘bug eye’ headlights, which mirror the Streetfighter style first introduced by specials builders in the mid-80s. The first official Speed Triple (T300) appeared in 1994 and was powered by an 885cc engine. This particular model is the later (1999-on) 955cc fuel injected T595 that went on to become known as the 955i. There’s no getting away from the fact that the Speed triple’s triple-cylinder engine gives out an exhaust note that is unique and memorable. If you’ve ever heard the sound of a WWII Mosquito aeroplane on full chat, that’s what the Speed Triple sounds like. Being as it is a triple-cylinder engine, it manages to combine the low rpm stomp of a V-twin and the top end rush of an inline four-cylinder. Reliability is not a problem with this model and the fuel injection aggravation of previous models had been ironed out (just, there were various ECM updates). The Street Triple is no lightweight. In fact it’s quite a hefty lump of British motorcycle engineering and requires muscle and rider concentration when chasing the sports bike pack. Ride quality wasn’t bad for its day and would cheerfully support rider and pillion without the need for serious fettling of its suspension adjustment. Because it had little wind protection other than the upright clocks, Triumph had a field day when it started selling an official fly-screen. Considering the advertised bike is 13-years-old, and assuming the advertised 7,500 miles is correct (always check old MoT certificates), then this bike is good example of its ilk and testament to care by its owner.

You can view the ad here.