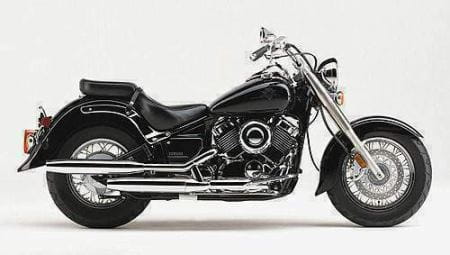 From its early four-stroke manufacturing days, Yamaha has carried a custom cruiser machine in its range and from this a committed global fan base. Arguably the most famous is the XV535 Virago; a middleweight V-twin cruiser that became a revered stepping stone to bigger custom bikes. The XVS 650 DragStar was a direct replacement for the Virago and a much better bike – mainly because its styling, chassis and running gear was modern with good development behind them. There are two versions of the DragStar, the base model and the ‘Classic’, which was essentially the same machine but with less chrome, deeper mudguards and other minor cosmetic changes. The engine is a 70-degree V-twin that is both friendly and reliable. This means its performance is in keeping with the cruiser theme; 70-75mph) is its sweet spot – any faster and the custom themed seating and bar arrangement starts to make a journey uncomfortable on arms, neck and back very early on. Many owners regard the DragStar as a viable alternative to, say, Harley’s entry level Sportsters – it carries off very well the looks of bigger machines. And the DragStar’s brakes were on the same shambolic level as most American cruisers. But that was a few years ago and time has moved on to the point the 650 DragStar became outdated to be replaced with the new XV and XVS950 range of custom machines. As a cheap intro to custom cruisers, the 650 DragStar is proving to be a sought after machine and the reason why second-hand prices haven’t substantially dropped over the last couple of years. If anything they’ve risen slightly in keeping with the demand for a fuss-free, viable custom cruiser.