Pick of the ads - Harley-Davidson XL883C 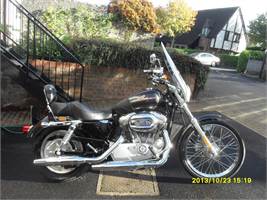 Each week, we trawl through Bennetts’ Free Classifieds section to find the best value-for-money bikes on offer. This week, we've picked a Harley-Davidson...

Harley-Davidson’s XL883C is one of several bikes from its Sportster range – an entry level, affordable intro to the huge world of Harley-Davidson. The 883C is essentially a small custom cruiser but with all the attributes of a large capacity Harley. The engine is your typical Harley air-cooled, 45-degree V-twin with a heart of gold. It’s a time proven unit, which is a polite way of saying it’s an old design but one which runs with modern technology of fuel injection and electronics.

The engine isn’t super smooth of, say, your Japanese in-line four-cylinder engine but the shuddering power pulses are what give Harley bikes their character – including the step-like gear change from the five-speed gearbox. On the move, the engine will smooth out to give a pleasurable cruising speed.

Of course, the 883C is a custom bike and the feet forward riding position and tall-ish bars are part and parcel of owning a custom bike. Bright chromed parts and black paint are also de rigueur. The 883C, like all Harley machines, is a blank canvas for personal customisation; H-D’s huge catalogue of accessory parts is mind blowing. When buying a Harley it is worth knowing that they hold their resale value higher and longer than any other manufacturer once initial depreciation has come into play.

Of course, being an ‘affordable’ Harley means suspension and braking is basic but sufficient to ensure a fuss-free ride. Some Harley fans view the 883 range as a stepping stone to bigger models, but many 883 owners are happy with their lot because this ‘baby’ Harley is a very competent motorcycle in its own right.

You can view the ad here.