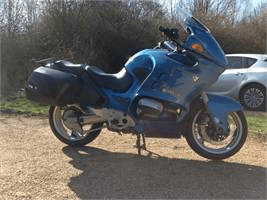 BMW brought its classic boxer twin powerplant kicking and screaming into the 20th century in 1995, dropping the ancient air-cooled design for a new air and oil cooled 1085cc unit.

While this motor would go on to power the iconic R1100GS (and evolve into the R1150GS) it made its debut in the touring R1100RT (German for Reise-Tourer, or travel tourer).

This fully faired shaft drive tourer was ahead of its time in the day in many ways, packed with gadgets such as ABS brakes, a powered screen, a three-way adjustable seat and heated grips as standard. The RT also came equipped with quality detachable panniers and had a decent option list that includes a factory fit radio and substantial top box.

While the engine was hardly cutting edge (and at 90bhp it hardly tore up any trees with a the claimed 280kg kerb weight) it proved fairly bulletproof and was a stable choice of police forces across the globe. An 850cc version (the R850RT) was also produced in small numbers but was generally poorly received due to the disappointing power to weight ratio).

Being a BMW, the RT has its fair share of quirks. The odd indicators, which BMW (and many of their riders) insisted were the way ahead for many years, take some getting used, as does the Telelever front end, but after a few hours in the saddle can become second nature.

BMW’s RT evolved into 1150 and 1200cc versions, which had extra power and a more relaxed sixth-gear, but the 1100 still has a great following. With old-school BMW build quality, even today they offer a lot of tech for little money. Prices for good ones hover around the £3000 mark and they’re the type of bike that tend to be well looked after and capable of doing big mileages.

I am reluctantly selling my beloved BMW R1100RT. It's a 2000 model, in excellent condition with just over 22,000 miles on the clock. It has just three previous owners from new and has a partial service history. RTs are very well specified with ABS, heated grips, adjustable (powered) windscreen, panniers and an adjustable seat height. This one also has a factory fitted alarm and will be supplied with an optimate. This one runs like a dream and is an excellent long distance tourer or everyday workhorse. It’s in good condition with a fairly new battery and decent Continental tyres. There are few better than this one and I will put a year's MOT and six months tax for the asking price (it's currently MOT'd through to September and should sail through).